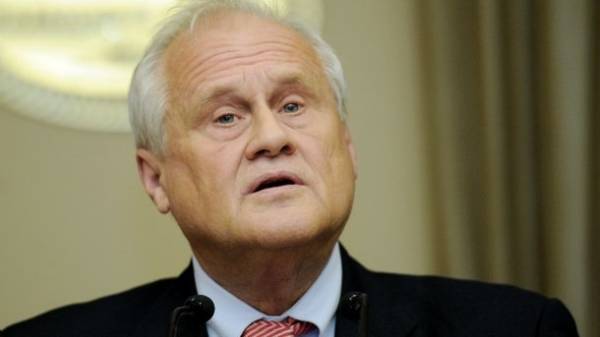 Negotiations leaders “channel four” during a conference call scheduled for next Monday. This was announced by the special representative of the OSCE in the Trilateral contact group on Ukraine Martin Sajdik, the TV channel “112 Ukraine”.

“There was a discussion about the dilution of forces and means in the Village of Lugansk. In this regard, I hope for a positive decision on this issue in advance of the teleconference of the heads of the countries “Norman four” July 24,” said Sidik.

See also: the EU declare that the words Zakharchenko about creating a “little” contradict the Minsk agreements

We will remind, during today’s meeting of the TAG the Ukrainian side urged at all levels to condemn the statement of the ORDO of “the Ukraine”, and also expressed hope for the completion of the investigation of the crash of the Boeing MH17 and bring the perpetrators to justice.

Kiev opposes the recognition of documents ARDLE and capture of Ukrainian companies and the Ukrainian side raised the question of a return to the demarcation line established by the Memorandum of 19 September 2014, and the withdrawal of militants from the occupied in February 2015 debaltseve.

Daria olifer said that in Minsk he discussed the release of hostages and access of the OSCE SMM.

Earlier it was reported that the next meeting of the TAG will be held on 2 August.