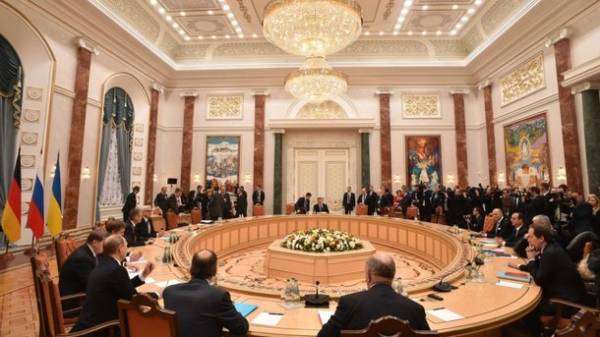 Statements about the so-called”little” not meet the basics of the Minsk process and does not contribute to the settlement of the situation in the Donbass, and attempt the division of Ukraine is not new and in 2014, she failed. This was stated following the meeting of the Trilateral contact group (TCG), the spokesperson of the representative of Ukraine Leonid Kuchma TAG Darka olifer.

“The trilateral contact group urged to refrain from any confrontational statements that contradict the Minsk agreements.
In this context, urge the Russian Federation at all levels to condemn this unacceptable action ORDO, which is a total violation of the Minsk agreements”, – said olifer.

According to her, separately, the Ukrainian side expressed the hope that in the near future will be completed the investigation of the death of Malaysian “Boeing” July 18, 2014 and punished the perpetrators of the tragedy.

The issue of safety is a cornerstone for the whole Minsk process, and the security of staff members of the OSCE SMM is an integral part of said olifer.

According to her, on the territory ORDO SMM patrols again and again confronted with aggression and threats.

“Unpunished those responsible for the death of the representative of the mission in April 2017. We demand to find and punish those involved in this tragedy. We insist on the admission of SMM throughout ORDA, in particular, to the entire line of the Ukrainian-Russian border. Consider the rejection and violence towards OSCE SMM as a deliberate effort to force the mission to end its activities in ORDO”, – said the press Secretary of Leonid Kuchma on the results of the meeting of the TAG.

In the framework of the subgroup on safety of the Ukrainian side once again raised the question of a return to the demarcation line established by the Memorandum of September 19, 2014 and the demilitarization of debaltseve.

The exchange of prisoners

As reported by olifer, in the humanitarian sub-group with the participation of the Verkhovna Rada of Ukraine on human rights Valeria Lutkovska is working on the harmonization of lists of people who should be released.

“The Ukrainian side has provided information about the persons involved in criminal offences and not related to the conflict. There is agreement that these people will not be in the lists requested ORDO”, – said the press Secretary of Leonid Kuchma.

In addition, Ukraine has received from ORDA official confirmation about the deduction of 70 people from 132, the release of which requires Kiev.

“In the near future we are waiting for confirmation of retention of 6 people, including and journalist Stanislav Aseev (Vasina),” said olifer.

Thus, according to her, the key question posed by the Ukrainian side in the political subgroup of the demand of Ukraine on cancellation of the decree of the President of the Russian Federation on the recognition of documents issued by the illegitimate authorities ORDO.

Ukraine also requires the rejection of the seizure of the Ukrainian enterprises in ORDO, from the ruble zone, as well as from the establishment of pseudogravity in ORDO.

We will remind, Ukraine is in favour of round-the-clock presence of the OSCE mission in breeding forces, said the President of Ukraine Petro Poroshenko.