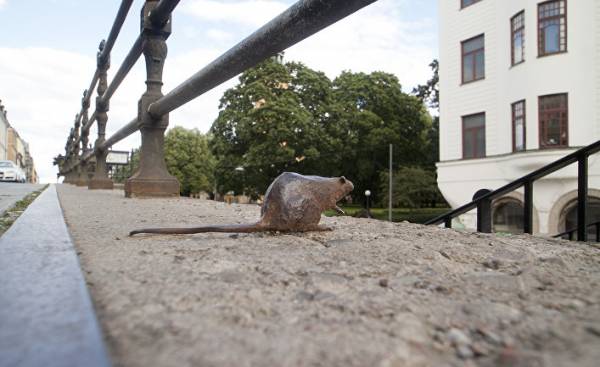 The number of operations on the deratization of Stockholm reached a record level. The newspaper Dagens Nyheter have marked them on a map and found that most acutely the problem is in the South of the city, södermalm. Most of the statements about the rats coming from the street Henriksdalshamnen that in the Hammarby sjöstad district, and “garbage conflict” may worsen the situation.

“If debris and will lie, the rats begin to arrive as letters in the mail”, warns Sven Jeppsson (Sven Jeppsson) of the company Anticimex, which deals with pest control.

Rats running on the streets is a spectacle in Stockholm can be observed more often. At the end of last year, said that the situation is so serious that the rats in the parks of the city could threaten the health of the population. Rose sharply, and populations of rats in the city centre.

It’s impossible to say how many rats hiding in the bushes of parks and down in the holes and passages underground. But what is certain is the fact that deratization are carried out more often.

Staff Anticimex often go on calls to get rats. In 2004, the Stockholm region, the company has spent little more than 4 thousand operations to eliminate the rats or mice. Ten years later this figure had doubled to 8 797 operations. Since the number is constantly growing, and in 2016 was held on 11 060 operations on the rodent.

To date this year deratization was performed for 6 327 times. Never Anticimex not conducted so many operations to eliminate the rats in the Stockholm region.

“Yes, every year we do this more often. More 80% of the work that we do in the city for rats,” says Sven Jeppsson division Stockholm division of the company Anticimex.

Residents can themselves apply to the Stockholm municipality, if they saw that rats run across the street or across the rat’s corpse. Historically the biggest problem with rats was on the North and East of the city — the Rival and Östermalm. But this year, the statistics began to lead the South.

Of all the 438 applications about dead or living rats, as many as 87 applications were received from Södermalm. Follow him Östermalm with his statements 77 Rival with a 45 and Kungsholmen with a 42.

May 20 municipalities in Stockholm sprayed a highly effective tool for pest control “Racumin”. With his help, was able to significantly reduce the number of rats. Because of this, it is difficult to assess this year’s performance, says the coordinator of pests Tommy Tounger (Tommy Tuvunger).

“I can’t draw any conclusions about this. Purely historically, the biggest problem usually was Rival Astrale. But I need to see how the situation will change over time,” he says.

Street, which received the most applications about dead or living rats, located in the Hammarby sjöstad district, but rather, it Henriksdalshamnen: ten applications this year alone.

“Any particular address can not be named. From year to year, all very different. If the rat saw a lot of people in a place where there are a lot of people about this one rat can state several times. On the other hand, large colonies of rats can dwell and where the people simply do not see.”

Tanya strand (Strand Tanja), a biologist from Uppsala University, conducted a study of the diseases encountered among rats of Stockholm, Gothenburg or malmö. She sees several potential reasons that fighters pests are faced with an increasing number of rats.

In Gothenburg and Stockholm large-scale construction of tunnels destroyed the natural habitat of rats. Climate warming also could alter the behavior of rats.

“It seems that their behavior has changed. Before rats can be seen soon after sunset, and they were modest. Now they catch the eye more often and statements it became more,” says Tanya strand.

In addition, rats have become resistant to substances that compete with them, so that their simply harder to kill.

In November 2016, the municipality received permission to use heavy artillery against the invasion of rats can start to use the “Racumin” which is sprayed in the rat tunnels under the ground. The Agency of chemicals used it until the 20th of may this year. Then the municipality came back to their former methods. As things go, nobody knows.

“Now in our fight with the rats we have entered a good phase. The situation is under control. They are not yet too entrenched. Time will tell what will happen next. In late summer they are usually getting the most, but so far, no predictions can be done,” says the coordinator for combating pests Tommy Tounger.

Anticimex has warned that the ongoing “garbage strike” can lead to garbage heaps, which will feast on rats.

“If debris and will lie, the rats begin to arrive as letters in the mail. They will have good access to food and, therefore, they will become more and more and then they will come running from other places,” says Sven Jeppsson from Anticimex.

“When they have bad food, they usually eat each other, but when there is a trash heap, they don’t have to do that.”

Sven Jeppsson says that rats can hide in holes and cavities in buildings near the garbage. Then they run back and forth to fetch food. Naturally, the more food, the faster they will multiply.

“Of course it is. They become sexually Mature in two months, so it’s going fast.”

Tommy Tounger don’t see any indication that a garbage strike was prevratilas into a feast for the rats, but he does not exclude that it can affect the situation.

“While the garbage containers impervious to rats, there was no danger. But if the debris will lie in the streets around the containers, the situation will worsen considerably. This will pose a problem in a very different light, in my firm belief,” says Tommy Tounger.

Vivec, Broms (Viveca Broms), 65 years, pensioner, Hammarby sjöstad: No, not seen it myself but my grandson saw them running around where we live. I did not notice anything special, although I’ve always go.

— If debris will be more, then what is? Yes, the thought came into his head.

Oliver Pallman (Oliver Påhlman), 4 years, and Passion Hader (Hader Pascion), 32 years, works in the pharmaceutical industry, district Henriksdal: Yes, 100 percent, especially in the evenings they become very active here. I saw a bunch of rats here in the Park. And Oliver saw one last week. They climb in the boxes below. I think it’s good, it seems, in Hammarby sjöstad is full of them.

— No, I think they come not because of this.