The leader of the agrarian market of Ukraine, the company “NIBULON” develops the most modern in Ukraine fleet of trucks, which will improve efficiency of not only the car but also the river freight logistics company. On Tuesday in Kiev, told reporters the General Director of JSC JV “NIBULON”, Hero of Ukraine Alexey Vadatursky during the solemn ceremony of transfer of truck tractors Volvo. 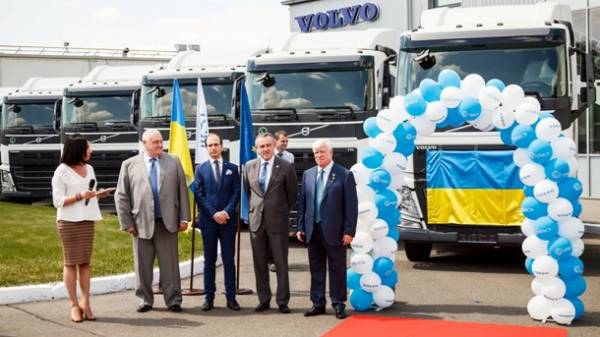 According to Vadatursky, the company this year purchased 60 new tractors, 30 of which are Volvo cars, the rest – Mercedes and Scania.

“According to the World Bank, the number of new trucks on the roads of Ukraine – less than 1% of the entire fleet, up to 5 years – less than 3%, more than 75% of cars older than 10 years. Thus, buying the fleet, which will be involved in the transport of grain and oilseeds with our infrastructure in sea and river ports, we will improve the statistics in a whole new fleet of cars in Ukraine. In fact, today we get the latest fleet of trucks in the country”, – said General Director of “NIBULON”.

He also said that Volvo cars came to Ukraine from the factory in Ghent (Belgium) and Gothenburg (Sweden) are the latest models that are available in Europe.

Commercial Director at Volvo Trucks Ukraine Inna Smola added that the transportation was designed specifically to meet the needs of “NIBULON”. “We have studied the routes and operating conditions of vehicles and proposed equipment fully adapted not just to the roads of Ukraine, and for such transportation, to be implemented by “NIBULON” – short shoulder of the fields around the river terminals in the range of 80-120 km,” she said.

In addition, according to I. Resin, the vehicles are equipped with monitoring system that allows online tracking about 170 parameters of the vehicle, including load, driving style, fuel consumption and others. All drivers will run on the new Volvo will be mandatory training for the efficient operation of transport.

According to Vadatursky, NIBULON is Ukraine’s first agricultural company that completely abandons interregional transportation of grain and oilseeds.

“We are creating the infrastructure in which the delivery will be made within the scope of the river to the nearest Elevator, and then transportation takes place on water. We have removed from the roads, about 2 million tons of grain a year and every million tons – it saves on the damage repair in the amount of about UAH 800 million. We plan to increase the volume of river traffic of up to 60 per cent in our logistics and aim to reach 4-5 million tons of grain off the roads. This will allow Ukraine to save up to 4 billion UAH on repair of Railways every year,” – said General Director of “NIBULON”.

He also added that the company has implemented a program of release of the regional centers of large vehicles, erecting the terminals outside and paving the way trucks to bypass these cities.

“Civil servants could learn from this experience and implement it across the country. It would be better than we are constantly criticized,” he said.

“What we are witnessing today is a success story of European businesses. This shows the mutual business contacts within Europe. And this is the story of a highly effective business. For me this is one of those great moments, when we see the Ukraine, Belgium, Sweden and the European Union as a whole grow and develop economically together, creating the Foundation for a successful overall social and political future,” – said the Ambassador of the Kingdom of Belgium to Ukraine Luc Jacobs.

According to first Secretary of the Embassy of Sweden to Ukraine Henryk Norberg, this is an example of the support that all member countries of the European Union would provide Ukraine. “For any of the Embassy one of the main objectives is to increase the volume of bilateral trade. Today we see a good performance between Ukraine and Sweden. But for further growth we need more success stories like this between “NIBULON” and “Volvo trucks Ukraine”. The Swedish company is very careful in taking decisions and not doing the final steps, until you are sure the creation of all necessary conditions for work. And there are many Swedish companies interested in the Ukrainian market, which are just waiting to make this final step. Therefore, it is important to widely share the success story”, – he stressed.

“”Volvo trucks Ukraine” to earn the trust of the best agricultural companies of Ukraine – is a significant achievement of which we are very proud of. Today’s event illustrates an example of how European countries are able to develop relationships. “NIBULON” is the flagship of the Ukrainian economy, which creates not only a modern history of Ukraine, but the company that leads our country into the future. And “Volvo trucks Ukraine” is proud to be a part of this history of the growth and development of Ukraine”, – said Inna Resin.