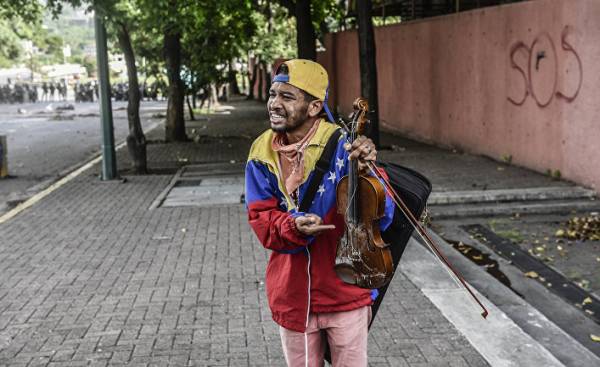 Photo Willie Arteaga who is crying because of the Venezuelan security forces broke his violin, was seen by millions of people around the world. 23-year-old Arteaga participated in the protests against the government of Venezuelan President Nicolas Maduro, playing Patriotic songs. His look of despair expresses the feelings of many inhabitants of Venezuela, wondering how long their country has to suffer from violence and bad governance.

Since 1 April in Venezuela began organized opposition street protests, the course has already killed at least 115 people. Of these, more than 50 people — below the age of 30, many were still teenagers. Among them Nehomar lander, a 17-year-old participant in the protest, which was reportedly shot at close range cartridge, tear gas, and Jason Moore, who also was 17 years old: he was shot in the face when he participated in demonstrations in the South-West of the country.

To assess the size and demographics of the protesting crowd is always difficult, but we can make two clear conclusion about the current protests in Venezuela. First, they were much wider and more heterogeneous in socio-economic terms than the protests against Maduro in 2014, which was mainly attended by Venezuelans of the middle class. Secondly, in today’s protests many young people.

The youth was the leader of the three waves of protests against savitskogo of the regime established by predecessor Maduro, Hugo Chavez (he died in 2013). In 2007, it is the youth who led the protests against the government of Chavez, when he closed a popular TV channel Radio Caracas Televisión, replacing it with public television. Then, in 2014, young people came to the protest rallies against rampant criminal violence in the country under Maduro, as well as their right to protest. Now a new generation of young people joined the veterans of the previous waves, demanding to hold elections and end the current regime.

The current protests have lasted for more than 90 days. Young Venezuelans oppose the high level of unemployment and lack of economic prospects. In 2016, 70% of all protests in Venezuela has been caused by economic discontent, the requirement to work was one of the main. The government stopped publishing official data on unemployment for more than a year ago. Nevertheless, it is obvious that the Venezuelans (and especially young people, who are unable to buy their own food and housing) suffer from a deepening economic crisis in the country more than ever.

For young people especially dangerous because she now has nothing to lose and she might lose everything in the future. As stated by one of the student leaders in 2014, “we have to protest because the government is stealing our future.” Older people, on the contrary, is usually guided by the opposite calculation: they do not want to risk property and income that they have now for an uncertain future. However, when their own children take to the streets, they sometimes go after them.

In today’s protests, the regime can blame only himself. Chavez, Latin American like Donald trump, came to power on a wave of populism in 1998. He often boasted of his success in the fight against unemployment. The Chavez government has invested heavily in higher education; by 2010, Venezuela ranks fifth in the world in the ratio of the number of students. Many of the new state universities established at that period, were closely associated with the regime. Students report that the authorities demanded from their participation in Pro-government rally, promising in exchange a job in the public sector after graduation.

To fulfill these promises, the authorities sent a huge oil revenues of the country, who at the time she was on the expansion of the public sector. But the spending of oil revenues on preparing students to perform work, which depends on the preservation of oil revenues in the future, is hardly a sustainable economic model. In 2014, when oil prices began to fall, it became quite obvious.

The collapse of oil prices in combination with the effects of many years of poor economic management led to the fact that young Venezuelans were only high expectations and no real prospects. But the only solution offered by the government of Maduro, was the strengthening of repression.

Tears Arteaga, which he pours on his violin and his country, pictures of mourners at the funeral of the young participants of the protests — all this is a clear illustration of the situation: young people out into the streets, demanding change and opportunity, and the government that emerged on the promises that it is unable to perform, it responds with violence and bullets. Not fulfilling its obligations, the authorities have betrayed the children of its supporters, using against them the same violence that was previously used only against elites.

The question now is, who will surrender first. The unofficial motto of the protests of 2014 was: El que se cansa, pierde (“Who gets tired, he loses”). But that time the opposition “blinked” first, the protests began to decline, as soon as the world Cup.

Now the opposition has put forward more specific requirements and have vowed to remain on the streets until then, as long as these demands are not met. The opposition call on the government to hold fair presidential elections, to release all political prisoners and to open a humanitarian corridor so that the country could receive badly needed food and medicine.

The problems of the country Maduro blames the protesters. But this time it is not enough only one populist rhetoric to calm people down. The Venezuelans have spoken loud and clear: they are tired of populism and not get tired of street protests. 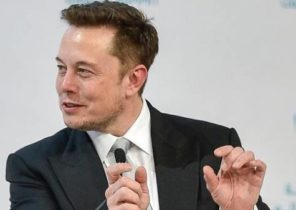