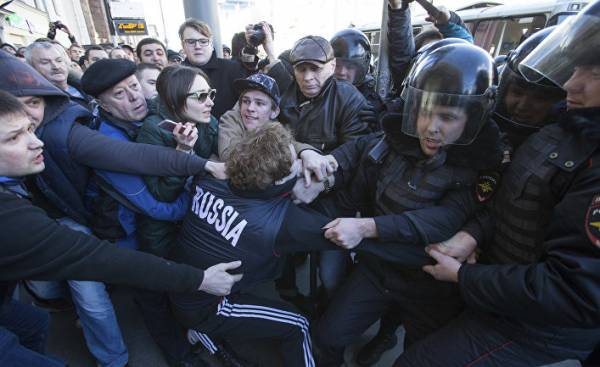 Moscow. The scale of protests in Russia this weekend came as a surprise even for the organizers.

On Sunday, tens of thousands of Russians took part in the anti-corruption demonstrations in 82 cities from Vladivostok on the Pacific to Kaliningrad on the border with the EU. In Moscow during the protests, police arrested over a thousand people, which was a record for this city during the reign of Putin.

The man who brought the country to the streets can celebrate their achievements just a few short minutes. As soon as the opposition leader Alexei Navalny appeared in the center of Moscow on Tverskaya street, the police immediately detained him. (The next day, a Moscow court fined Navalny $ 350 for the organization of banned protests and sentenced him to 15 days of arrest.) But Bulk did not lose her presence of mind. “The time will come when we surrender them for trial (but honest)”, — he said on Twitter before sentencing.

Two weeks earlier, Navalny became the most famous critic of Putin and determined to create his competition in the polls, has published the materials of the investigation on alleged corruption of Prime Minister Dmitry Medvedev. His team posted the video where it says that Medvedev during his stay in power has assembled a collection of palaces, yachts, and vineyards. Navalny anti-corruption Fund regularly publishes articles and videos telling about unfair knitted together the States of those in power or close to power people. In the past, they talked about the business Empire of the son of the Russian Prosecutor General and the millions allocated to the Fund under the leadership of Putin’s daughters. But his video about Medvedev Navalny hurt people for a living like never before.

In Russia third year in a row continuing severe economic downturn, and it was introduced in Western sanctions, when it in 2014 annexed the Crimea from Ukraine. The news about secret wealth Medvedev, appeared at a time when the entire nation is suffering, caused outrage in the country. A few days videos on YouTube are watched by millions of Russians.

As the Prime Minister immediately became a symbol of all the injustices in Putin’s Russia, where corruption has become a daily phenomenon. According to Navalny, Medvedev’s hiding his fortune in a web of charitable organizations managed by his entourage. The Prime Minister owns a vineyard in Italy and a Palace built in the 18th century in St. Petersburg. The slogan of the protesters was “Dimon (Medvedev) will answer.” The Russians were carrying posters with pictures of ducks, hinting at an expensive house that Medvedev was allegedly built for waterfowl on a pond in one of their estates; as well as hung on the neck of the sneakers to show what a rich collection of expensive shoes owned by the Prime Minister.

But the anger among protesters has caused not only the ostentatious wealth. Medvedev, who served as President from 2008 to 2012, until it was replaced by Putin, has long been unpopular in Russia. Unlike Putin, who never appears in compromising his light, Medvedev was the Kremlin leader, which most often admits missteps and committing inappropriate actions. It is well known that he is deaf to requests of people. During his visit to the annexed Crimea last year, he told the group of the indignant retirees: “no Money, but you hold fast.” This phrase immediately spread on the Internet. (Medvedev’s reaction to the protests was also very characteristic. One Instagram user asked the Prime Minister on his page, as he spent the day. Medvedev replied: “Well, I was skiing!”)

If the ratings of Putin’s popularity soared as a result of his attempts to lead a tough game with the West and military victories abroad, Medvedev blamed that the standard of living in the country falls. In recent years, Russian society and even some of the close associates of Putin, Medvedev considers too weak a leader, without which you can do.

Therefore, savvy Navalny, who recently announced his intention to run for the presidency, could not take advantage of the opportunity.

According to analysts, focusing on protesters Medvedev, Navalny has managed to achieve such a turnout, which he had never seen before. This is partly due to the fact that the theme of the protests was attracted by two very different groups of people: dissatisfied with the current policies of residents of the largest Russian cities of Moscow and St. Petersburg, and residents of remote Russian regions, where the protest movement usually is not interested. The majority of Russians in the cities will think twice before protesting against their President, but embarrassing the Prime Minister they do not care. They also daily evidence of corruption at the local level with its painful consequences. The biggest surprise for the Russian authorities began these protests in the region. Before two o’clock, when the protests were to start in all 11 time zones in Russia, about 20 thousand people held demonstrations in Siberia and the Urals.

“Protests were held in regional centres, but even in small towns — that’s never happened before”, — said Russian political commentator Alexander Kanev. In some cases, the protests took place in small provincial cities such as Biysk in Altai Krai in the far East of Russia (SIC — approx. TRANS.), where people came out in large numbers to rallies since 1990-ies. Protests were held even in the capital of Dagestan, Makhachkala, where Putin during the elections in 2011, allegedly gained 92.8 per cent of the votes. (Came to the rally of 150 people; 50 were detained.)

Moscow policy is usually skeptical and contemptuous of the isolated provinces of the country. In Putin’s Russia, all important decisions are accepted in Moscow and the regional authorities is just the performers. In addition, the standard of living in the regional centers is much lower than in the glamorous capital. But Navalny has achieved surprising success in the Russian hinterland.

In the beginning of the month Bulk went on a trip on Siberia and the Volga region. He spoke in Novosibirsk, a rally of protest against tax increases for housing. The following week, he arrived in Volgograd, where he promised to investigate and find out where local officials took the money to build mansions. At a rally Navalny unknown poured green paint in an attempt to discredit him. He reacted to the incident quietly, and on Sunday some protesters in solidarity with their leader too struck on their faces in green paint.

“It very successfully uses the incompetence of the local leaders in the regions”, — said Konstantin Kostin, head of the Moscow Fund of development of civil society. This incredible success has caused concern in the Kremlin, which suffered when Navalny called for protests of Muscovites from the middle class. Now, if he will have his supporters among the traditional Putin’s electorate, the Kremlin may feel differently.

By choosing Medvedev as a target, Navalny has attracted protests from another group of the population: the youth. This weekend rallies came a few demonstrations of 2011-2012, which was the name of the protests on Bolotnaya square and were the last major protest action in Russia. While most of the demonstrators were representatives of the urban middle class. Generation of Marsh formed the majority in the March, held last month in Moscow in memory of slain opposition to the policy of Boris Nemtsov. But on the weekend the protests look very different.

Faces in the crowd was much younger. Many Russians protesting in Moscow and in the regions were born after the collapse of the Soviet Union, and some even after Putin came to power in 2000. When the protests ended, it turned out that among the detainees there were several minor, and my parents had to pick them up from police stations all over Moscow.

A large number of young people among the participants of the protests raises the question of whether growing up in Putin’s Russia a generation to live by the same rules as their parents. One of the examples that are brewing in the youth’s rebellious mood was a video taken in the school of the city of Bryansk, located near the Belarusian border. It attracted attention after it last week posted it on YouTube.

There the student argues with a teacher after police questioned his classmate for the distribution of publications Bulk in social networks. The headmaster said that he should be grateful to the present leadership because they do not remember the chaos of the 1990-ies. Many participants of social networks have expressed concern about the psychological manipulation that exists in the Russian education system.

According to analysts, this generation of Russians are not watching television, where most dominated by Putin’s propaganda. Most often they turn to social networks as a source of information, and the Kremlin controls much less.

“Already there are signs that this generation looks with a certain irony to what is happening around. It ridicules the system online,” says political scientist Mikhail Vinogradov. A bright and high-quality video Bulk in combination with the anti-corruption struggle and protests against Medvedev’s unite this generation is much stronger than the demonstrations in memory of the Germans and against the war in Ukraine.

“The majority of Russian youth under the age of 25 believes that we have a brilliant exterior, but a terrible domestic policy,” wrote Monday on his Facebook page well-known journalist Mikhail Zygar. Many of the young people support Putin’s Crusades abroad, but Medvedev simply see “human meme” because he is unable to understand the hideous social reality, said Zygar.

Next year will be presidential elections, and many young people among the participants of Sunday’s protests reach adulthood and will have the right to vote. Since this generation doesn’t know anyone, except Putin, the Kremlin is counting on his support. “However, the Kremlin does not know how to behave with young people,” — said the sociologist Denis Volkov from Moscow’s independent Levada Center. Monday blindsided the Kremlin has made yet another mistake, which can set against it the youth: the press Secretary of the President Dmitry Peskov has suggested that young people could bribe to take part in the protests.

Meanwhile, state television chose to ignore Sunday’s protests, focusing on the confrontation between Russia and Ukraine on the eve of the “Eurovision” contest. However, in social networks there are thousands of videos showing crowds of protesters throughout the country. “This is not a political crisis, — said Vinogradov, — but it is a very difficult situation.”