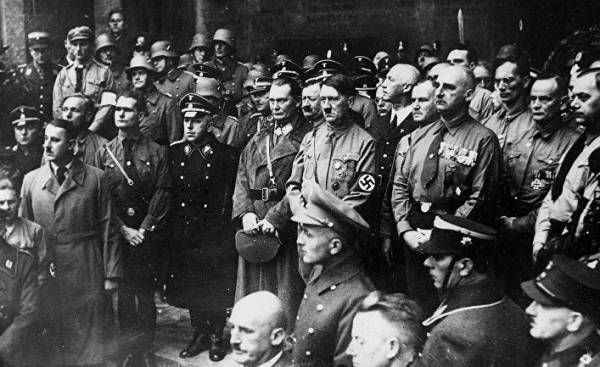 No one will like it if he was declared insane. But sometimes the assertion that at some point in time you were “out of their free paleopedology”, may be life-saving. Hospitalization (temporary) in a psychiatric hospital is better than the way to death row.

In this way Colonel General Rudolf Schmidt, whom his subordinates affectionately called “Papa Schmidt” managed to avoid the penalty. The life of a professional military, which with 20 years, since 1906, always wore a form, in the spring of 1943 was under threat.

The Gestapo has exposed his younger brother Hans-Thilo as a spy; from 1931 to 1938 he passed information about the German cipher machine “Enigma” to the French. Moreover, during the searches were discovered unequivocal letter from Rudolf Schmidt, “which was very rapidly directed against the führer,” writes historian Chris Helmke (Chris Helmecke) from the Center for military history and social Sciences of the Bundeswehr, the former research Center of military history of the Bundeswehr (MGFA), in the latest issue of the journal “Military history”.

Letters have not survived, but apparently was very sharp. Such a conclusion can be drawn from the report of the authorized management personnel of the army, which about Rudolf Schmidt says: “Among other things, he engaged in criticism of the top leadership and blamed him for errors that allegedly led to heavy defeats last time.”

There would be no happiness, Yes the misfortune helped: the military judge relieved him from the prosecution before a military Tribunal of the Reich. He was sent for psychiatric examination, which gave the conclusion of insanity, and he was placed temporarily in a madhouse. From 10 July 1943, Schmidt was in the “führer’s reserve”, in fact, paid premature retirement. By the end of the quarter, at the age of 57 years, he was sent on early retirement.

Although Schmidt escaped the sentence only by a lucky chance, henceforth he again tried to return to military service. He even got the chief of the SS Heinrich Himmler, but Hitler flatly refused.

This behavior remains a mystery, because Schmidt, in contrast to the same senior military leaders, like Wilhelm Keitel (Wilhelm Keitel) and Alfred Jodl (Alfred Jodl), was not an obedient executor of Hitler. On the contrary, he showed in word and deed that denies the war of annihilation waged by the “führer”.

That’s what makes Schmidt’s interesting, because it shows what discretion had the commander of the front, even during the Soviet-German war. Of course, the case of “Papa Schmidt” however, illustrates how rightly says Helmet that influence even the General-the Colonel to the soldiers at the front were limited when he gave the orders, deviating from the main line of management.

In the Polish and Western campaigns, Schmidt successfully led a tank division and army corps, however, not every gun or tank. He tried to stop at the last moment the bombing of the center of Rotterdam, but it was too late: the order is not reached German planes. 800 people died, the old part of the city burnt down. The looting and violence against civilians in subordinate units Schmidt did not tolerate; as a “person having judicial authority”, he ordered for it to be punished strictly.

In the attack on the Soviet Union he was involved again as the commander of army corps; the aim of his tanks was Leningrad. But he soon realized that there ensued a struggle of a different quality: “the War here is incomparable with any other, so she’s violent and bloody — he wrote and continued. In any case, this is the most horrible and inhuman of the four wars in which I participated”.

By Christmas 1941, Schmidt took over command as commander of second Panzer army — about 200 thousand soldiers. Besides, now he was responsible for hundreds of thousands of Soviet civilians who lived in the area to find his troops. Already as head of a military unit that performs, mostly regarding directly front problem, Schmidt spoke out against the notorious “Commissar order”: “As an emergency measure, the order to shoot political Commissars should be cancelled,” he wrote in a memo in September 1941.

As commander in chief (and responsible for the area that includes “the army’s rear”), on March 3, 1942, he issued “military order on treatment of prisoners of war, partisans, scouts and the enemy population”. In it he demanded not to wage war against the civilian population and to maintain discipline.

This was particularly important in the defense against Soviet partisans. As understood Schmidt, brutal occupation has led to the opposite effect: the population supported the partisans. So he was involved in the restoration of normal life in order to attract the population to the side of the Wehrmacht. Proudly he wrote to his wife: “My army area, despite the guerrillas, now the most productive in the whole of Russia”.

However, the effect of even such clear orders was limited, as established Helmet: “a Sheet of paper, by itself, could not affect the behaviour of an army or to prevent abuse”. Otherwise sounding job predecessors Schmidt and ideologically aligned instructions at the lower levels of the Wehrmacht led to the fact that his soldiers treated the population as “annoying insects” and practiced “unlawful executions”, as found by the interpreter.

Elevated to the position of Colonel-General of 16 March 1942, Schmidt wanted to deal with this and in April 1942 ordered: “the longer the war lasts, the stronger the need to avoid the brutality and savagery of manners. In the interests of the impact forces and discipline of the troops they have to restrain themselves within limits”. This statement, however, Schmidt has found himself almost alone among the senior leadership of the Wehrmacht.

After his happy, but unwanted retirement, followed by the next blow of fate. At the end of 1947 he went to Weimar, and was arrested in the Soviet occupation zone by the secret service NKVD on charges of war crimes. Only after approximately eight years of imprisonment in Soviet prison camps he was at liberty together with the last German prisoners of war. A half later he died shortly before his 71st birthday. Before Stalin’s judges no one declared him insane.