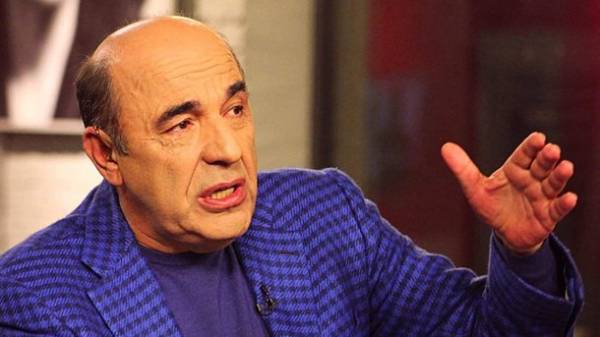 Opinion. Recently in Parliament a scandal on the scandal. The latest controversial decision the deputies raised the salaries of his assistants by 25%. On the agenda another important issue — Pension reform. As you can see, deputies don’t make laws that can ease the life of Ukrainians in difficult times. About these and other relevant questions, we spoke with the Deputy Chairman of the parliamentary Subcommittee on human rights and leader of the political party “For life” Vadim Rabinovich.

Vadim Rabinovich believes that the new pension reform disastrous for the Ukrainians. However, voting for her will be held before the parliamentary recess. “Yes, the vote will be. They will make it to next week. I never in my life for this pension reform, which makes us serfs, do not vote. And anyway, I want to tell you that a little more, and we will live to see the time when everyone will be able to say: “You know, I lived in Ukraine to serfdom,” — said the MP.

In his opinion, the initiative, which is promoting in the Parliament a disservice to all citizens of Ukraine. “Therefore, the pension reform, which just makes it impossible for people to survive, putting an end at all on any thoughts of people that can retire to exist, not that I can’t support, I think this is the biggest parasites and scum who will do things against his country,” — said the politician.

Vadim Rabinovich said: the main thing is for people to be able adequately to earn an honest living. “If we can’t tell the kids: “look, your dad or grandpa worked honestly and now lives on a pension,” then we will destroy the country and one will not work. Nobody will work for nothing”, — concluded the MP.

He also announced that among the members of the coalition are people’s representatives, who propose to completely cancel the pension. “The Deputy BPP Alex music in an exclusive interview said, “it is Necessary to cancel the pension in Ukraine — and will have more opportunities to earn and children to take care of their parents.” I don’t know how to comment on it. Something terrible happens,” — concluded the leader of the party “For life”.

300 MILLION IS BETTER SPENT ON THE NEEDS OF THE PEOPLE, NOT TO BUILD A WALL WITH RUSSIA

According to the opposition politician, the construction of the wall on the state border of Ukraine with the Russian Federation is the high cost, which came to nothing lead. “I want you to know, what is the change: urgent, immediately “to save the country” needed to vote on amendments to the budget that imply that 300 million urgently need at this wall. Urgently, otherwise we will not survive. Would be better if they spent that money on the needs of the people“, — said the politician.

According to the Deputy, he personally visited the construction site of the wall. “I went there, watched the wall this. Don’t even know how to comment this event. I thought in the past that we stopped laughing, we discussed. And again, it turns out, it happens. I hope that after all in Parliament we will return to this issue and Mr. Groysman decide to allocate 300 million in the next building”, — concluded Vadim Rabinovich.

E-THE DECLARATION HELPED TO LEGITIMIZE STOLEN FROM THE PEOPLE

Law enforcement needs to find out where the billions of officials. This was a live broadcast of the program “who is Who Rabinovich,” said people’s Deputy, head of Subcommittee on human rights, the leader of the party “For life” Vadim Rabinovich.

The journalists of the program “Nashi Groshi” found the luxury yachts which are owned by Ukrainian officials or their relatives.

“The question is not who has what, and very simple things. If you have worked in business and you have at least some explanation of your income, then at least buy the plane. But if you judges, lawyers, prosecutors, it is necessary for our bodies (law enforcement. — Ed.) Wake up”, — said the MP.

According to him, “these e-Declaration, which legitimized stolen from the people, the whole system, it still may not be the final product”.

“We will be back to where prosecutors, government officials, judges are suddenly billions of dollars when they worked all his life for the salary. This issue of social justice is yet to be solved. Maybe today or tomorrow will have to change the power and then to solve these issues,” continues Vadim Rabinovich.

The leader of the party “For life” commented on the intention of the head of the faction “Samopomich” Oleg Berezyuk fasting in protest against the actions of the Central government and in support of residents of the city: “Let me sit down to fast for the road. It is possible thereby fix the situation? Do you really think that, after sitting two days (on the hunger strike. — Ed.), you can change the country? No,” — said the MP.

The opposition politician said that listening to the Council, on which Sunday the 25th of June were nearly 5 thousand citizens of Lviv to discuss the problem with the garbage disposal: “I Have dissonance in my head: come 5 thousand people, demanded a position on the junk blockade. Sadovyy (mayor of Lviv. — Ed.) said garbage blockade, which they hold, beginning to crack. Win. The next step is an appeal to all the patriarchs, Jews, Christians, Protestants. He also said that we can handle: “It’s nothing. Deal with it,” said Rabinovich.

But the statement of the MP from “Samopomich” semen Semenchenko, what garbage collapse in Lviv profitable Russian President Vladimir Putin, the MP said, “this is where the root. That’s where the man finally opened his eyes. You know, this is nonsense, the nonsense state, and we always hear how something was stolen — Putin, something fell — Putin”, — the politician noted.

“Everything is much easier. Real heroes just on their work doctors, doctors, soldiers, just pull the prisoners, just take the volunteers, just can’t finish off the country, and we are looking at here is this: “When, when?” Yes, not in Lviv the question. And when he said Berezyuk: “How is it that our trash is not taken out, we first went to the Maidan”. Explain to me the connection between these phenomena: on the Maidan fled to take out the garbage? What is the relationship?” — said Vadim Rabinovich.