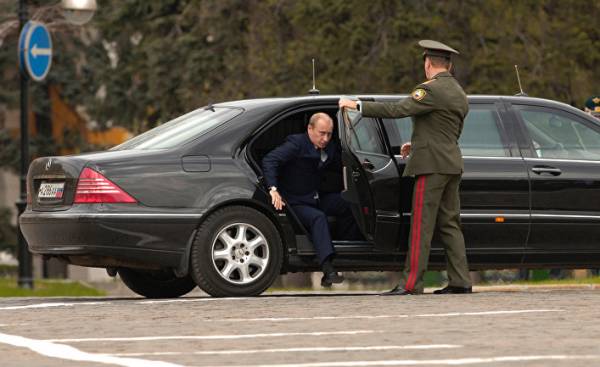 Still unknown — at least officially — who will become President of Russia after elections in the spring of 2018, but we already know which car it will move. After years of using Mercedes cars in Russia will be made to your limo, and Vladimir Putin has already tested, “He did not go on the car, and get moving on it a little bit,” said his press Secretary Dmitry Peskov. The prototype is not yet fully ready. However, the first photos of the test Executive car, produced in the framework of the project “Cortege”, not so long ago leaked to the Internet: an impressive three-volume angular car shape vaguely reminiscent of the products of Bentley, Rolls Royce and American stretched limos old. At first glance from the front it becomes clear that this is a car for important people.

The portal Motor1 published photos test drive “Tuple” in Sweden, however, there is official footage of the new presidential limousine. At the same time work on creating a machine shrouded in mystery. Let’s start with the title: the Russian media filed a request for registration of the brand Aurus (from the Latin aurum, “gold”, and rus — the word Russia). The emblem of the car should be four-pointed star, “symbolizing the true chosen path,” reads the request for registration.

In short, this car symbolizes Russia, which goes its own way. Vladimir Putin personally oversees the project “Cortege”. As said Maxim Nagaitsev, the former Director of the US state research center of development of the automotive industry, designing the presidential limo, the President “chose the design that he liked”. Customer car is the Ministry of industry and trade of the Russian Federation, and the first photos of the salon with a huge coat of arms on the steering wheel (it is a Golden double-headed eagle), confirm that this is a government project intended not only for one passenger.

Unlike ZIL Soviet leaders, Aurus will be available to all, even to be produced in limited quantities — as expected for cars of this class. On this platform will be made limousines, vans and crossovers that will compete with products of companies Mercedes, Audi and BMW — that they at the moment give preference to the rich and powerful Russian.

But despite the Patriotic intentions, the car will be very international: the project involves about 130 people, 50 of whom foreigners. The first test was held in Sweden, and crash tests in Germany.
Among the many companies working on the limousine, whose debut will probably be at the ceremony of inauguration of the new President in may 2018, including Italian Brembo is a leader in the production of brake systems.

Among other big names — Haldex and Harman, who are involved in multimedia systems. The development of acoustics will take the company Daniel Hertz, many of the components for the prototype were ordered in South Korea. The individual components of the security system, for example, bulletproof glass, armor and ejection seat was made by the Russian military structures. C body had some problems, because in Russia there are no baths for immersion that can accommodate a body length of six meters, but, judging by the photos from the factory LiAZ, the solution was found.

The main mystery is the engine of a car: for serial production provides four options, the most powerful of which will be a six – or seven-liter V12 with a capacity of 800-850 horsepower. As they say responsible for the project person, the engine will be produced in Russia. This is information that his establishment will charge the company Porsche. The manufacturer is not yet known: the idea of a joint project with Ford declined, as prices of the company are too high.

The Russian leader — known fan of cars. He recently demonstrated an example of a “four-wheeled diplomacy” — the ride in your limo (at the moment it is Mercedes that is able to survive a rocket shot) former Prime Minister Yoshiro Mori. Japanese media called this gesture is a manifestation of “special courtesy”. A few hours before, when in Ekaterinburg the exhibition of industrial innovations, the Russian President admitted weakness for Japanese products, with tenderness, remembering the Nissan, which he drove, as Vice-mayor of St. Petersburg. Stopping in front of the motorcycle Mitsubishi, he admitted to representatives of this company: “I Have not, but your company is the motorcycle. But I’m really trying for it not to go.”

Russian journalists immediately pricked up his ears: the Declaration on incomes of President mentions only the GAZ-21 Soviet limousines brand “Volga” 50-60 years (one of these machines Putin took George Bush), Lada Niva and a trailer “SKIF”. Peskov was quick to refute the news, calling it “palutaka”: the President was referring to one of the motorcycles Kawasaki in the possession of a gun, the Kremlin garage of special function. It is probably motorcycles team official escort to the President “a couple of times trying to sit down”.

Up until now, Putin only once seen driving a three-wheeled Harley Davidson motorcycle Lehman, which he tested in the company of the Night wolves, Pro-Kremlin bikers ‘ gang. Then he called it a “tricked out piece of iron”. Love of the President for cars goes back to the days of his youth, when his mother won the lottery “Zaporozhets”. Despite the fact that the family did not possess large means, the car decided not to sell but to give to Vladimir, who thus at the age of 20 was a car owner that a young man in the Soviet Union in 1971 was not even a rare and unique opportunity: “I always went on it was quite a daring driver. I was always afraid to get into an accident, but could not fix the car,” he admitted in his autobiography.

The automotive theme was also present in another key moment in the life of Putin when he was left without a job after the collapse of the Soviet Union and seriously think about being a taxi driver moving on the “Volga”, which he was able to purchase thanks to the work of the KGB in East Germany. Unlike Leonid Brezhnev, Putin is not evident in night races unaccompanied, sitting behind the wheel of a limousine (the former leader of the Soviet Union was a wonderful collection of American and European cars, which he really couldn’t brag about publicly), but as President, he never loses the opportunity to get behind the wheel.

He drove 2 thousand miles in Siberia, testing Lada “Kalina” (then drove the car the same color replacement in case of breakage), sat in the cockpit of a Formula 1 car Renault (“He is more closely “Zaporozhets”,” — commented the President) and tested — without much enthusiasm — prototype yo-Mobil, which was to become the first Russian electric car. But if he needs to open a new stretch of road, he does so driving a Mercedes S. it should replace the Aurus, becoming the status of the Russian limousine.