Atlantico: In an interview with The Guardian 2 Feb Advisor to Donald trump on strategic issues Steve Bannon (Steve Bannon) stated that he had no doubts about the war in the South China sea over the next ten years. What is it? Dangerous prophecy or the objective analysis contradicts the naivety of some commentators?

Jean-Vincent Brisset: Steve Bannon is not the first and not the only one who expressed concern about a possible conflict in the South China sea. The strategic ambitions of China over its Maritime spaces did not come yesterday, but they are not called secular, and they don’t have the historical legitimacy. It is worth remembering the publication on 25 July 1933 in le Journal Officiel of the Ministry of foreign Affairs of France about taking control of French naval units “number of Islands” (in fact, it was about all the Spratly Islands) July 19, 1933.

The message ends with the words: “These Islands are now included in the area of French sovereignty.” This was not followed even the slightest reaction of the Chinese authorities, who at the time experienced a complete decline. After 1945, the loyal troops of Chiang Kai-shek took advantage of the situation, and ITU-ABA, the largest of the Spratly Islands, now belongs to the Taiwanese. The only recent court decision on the ownership of the Islands was announced in July 2016, the arbitral court of the Hague. It is based on the UN Convention on the law of the sea, which was signed by all parties with the exception of Taiwan (the UN does not recognize its existence as an independent state) and the United States. This ruling (Beijing categorically not accept) confirms the existence of a zone of international waters in the South China sea, which automatically negates all territorial claims. China in turn submits a claim to the whole of this area up to the coast of neighbouring countries and on 1 thousand 700 kilometers South of Hainan island, which several decades ago seemed to the southernmost point of the national territory on Chinese maps.

Nearest neighbors (Vietnam, Philippines, Malaysia and Brunei) and other affected country (Singapore and Indonesia) has long expressed concern about the requirements of China, which are growing louder by the day. Beijing has gone beyond words and created an administrative unit, which includes the Islands area (including those that are occupied by other States). All this is accompanied by the construction of ports and airstrips on the reefs. Doing the same with other States, albeit on a much smaller scale. The new facilities are detrimental to the environment, but are fraught with serious military capabilities.

In addition to the aggravation of bilateral rivalry, the strengthening of Chinese control creates problems from the point of view of freedom of movement (both Maritime and air) in the area, which accounts for 40% of world Maritime traffic. It is for this freedom of movement, which is extremely important for Japan, South Korea and Taiwan, the US patrolling the area to enforce Maritime legislation.

By the way, the countries of the region have undertaken initiatives to form some “rules of conduct”, which would be mandatory, including for China.

Beijing first blocked the development of this code at the level of ASEAN, and is now trying to prevent agreement on it between other States alternating the carrot (relative to the Philippines and Malaysia) and whip (for Vietnam). Manila (at least, the President Duterte — his successors may behave differently) is closer to Beijing. The Vietnamese is a semi-official hint that the United States could become the guarantor of the freedom movement in the South China sea.

The tension is strong, however, it is difficult to imagine that the strengthening of the positions of the parties can lead to frontal conflict. At the same time, the friction between the ships of China and other countries can lead to incidents. This may seem cynical, but the death of a Vietnamese or Filipino sailors will not result in anything serious. At the same time, if you hurt the Americans or the Chinese people, the crisis can rapidly escalate and to cope with it will be much more difficult.

– Both countries have gone through big changes in recent years. What is the diplomatic strategy of governments XI Jinping, and Donald trump in this area of growing tension?

— In recent years, the Chinese government, especially during the XI Jinping, increasingly (and unilateral way) its full sovereignty in the South China sea. But you need to understand that this is only one component of geo-strategic strengthening of China. South — only part of the strategic vision that covers a wide area and involves the formation of the “defense perimeter” within which China will control all the traffic. The first group of Islands (goal for 2010) comes from the southern point of Japan to the Islands Bunohan. The second (goal for 2030 or later period) goes to the American possessions in the Pacific. Added to this is a “Pearl necklace” (Maritime silk road), which includes all Chinese naval bases, both commercial and military, to the Gulf of Aden. This strategy is like the epitome of China’s commitment to influence and a tool of nationalism, which traditionally adopted the Chinese authorities for rallying the population at the onset of difficulties at the domestic level.

Still pretty hard to tell what will be the diplomatic strategy of the United States in Asia or somewhere else. In the Asian region Trump inherited a reorientation of policy and the TRANS-Pacific partnership, which he promised to question if elected. Transatlantic Treaty was rejected even before the entry into force. The reorientation did not mean the strengthening of its military presence in East Asia, and its transfer.

Given this policy, Obama would have to reduce U.S. forces in Europe, but he did quite the opposite. According to the logic of the General policy of waste reduction would have to touch all the forces outside the national territory. In addition, the changes could lead to the development of airborne and remote strike capabilities. It would be logical if the US continued its opposition to the claims of Beijing in the South China sea, but they would have to settle for this through non-aggressive presence.

– Such a conflict would have reached a planetary scale. As it is now is the position of Europe on this issue?

The most likely factor that could trigger U.S.-China conflict is an incident in the air or on the sea. Anyway, we cannot exclude the reaction of Washington to the conquest of Beijing, the seizure of power employed by another country (including Japan) Islands or the invasion of Taiwan. If this conflict heats up, the first practical implication for Europe will be to stop the world’s factory. With all the ensuing lack of consumer products. Whatever it was, it’s hard to say what could be Europe’s reaction to such a conflict. The consequences of foreign policy decisions trump at the beginning of the mandate of the unpredictable. Europe is in a zone of turbulence, and the EU simply is no Asian policy. If you remember, the French defense Ministry recently said that Europe should regularly conduct patrols in the South China sea. Anyway, this statement most likely will not get to continue in practice.

Perhaps the beginning of the conflict will lead to the formation of an Alliance between China-Russia vs USA. Europe in this case would be divided, and the strongest country would go to the rapprochement with America. However, for China, the return to a bipolar system would be impermissible withdrawal. The fact that he depends too much on ties with the outside world, which play a key role Western States. 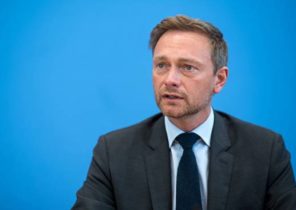