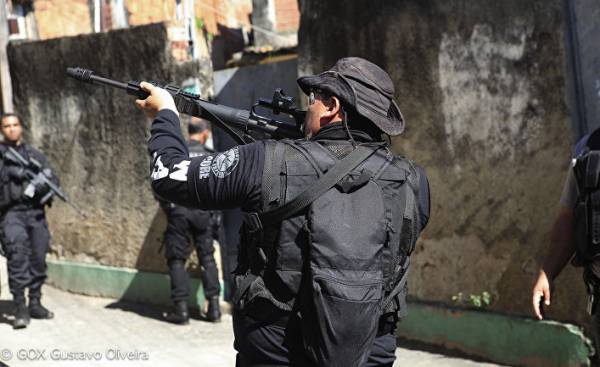 Madrid — Their slogan — “God, country, family.” They cannot be called nationalists, because Brazil is a fusion of different nationalities, but they consider themselves patriots and are ultra-conservative values. They represent a right-wing movement that is contemptuous of Communists, anarchists, punks, drug addicts, homosexuals and other minorities. In their ranks you can see black and white. This is the group los Carecas do Subúrbio.

Careca can be translated as skinheads. They do not consider themselves Nazis, and even stress that are not racist. The presence in their ranks of black features los Carecas do Subúrbio from other right-wing white Brazilian skinheads who hate Jews, gays, disabled people, immigrants from the northeast, and blacks. White skins in favour of the independence of the southern part of the country, more westernized and prosperous, and some boast the fact that in their veins flows German blood, although the roots are there very different.

Brazilian Nazism arose before Hitler came to power in Germany. The German national socialist workers ‘ party (NSDAP) attracted to its ranks of immigrants from Europe after the First world war. Nazism largely spread amongst the urban population than among rural. When world war II broke out among 87 024 German immigrants, there were nearly three thousand members of the Nazi party, concentrated in state of são Paulo, Rio Grande do Sul, paraná and Santa Catarina, that is a dynamically developing South.

Brazil was the largest number of Nazis living outside Germany: 5% and 10% of the total population. But since the Nazi party took into its ranks only the Germans, Brazilian ultras of different ethnic origins have created an organization called “Brazilian integralista action” (Acción Integralista Brasileña), which also joined the descendants of Germans who were not in the Nazi party. Although Brazil was officially recognized as a member of the coalition, some Ministers and senior officials of the times of the dictatorship of getúlio Vargas (Getúlio Vargas) were followers of the ideas of Nazism. After the Second world war, many Nazis took refuge in Brazil, including Dr. Josef Mengele (Josef Mengele).

“Brazilian integralista action” was more of a fascist than a Nazi in spirit. Founded in 1932, the Brazilian philosopher and politician, Plinio Salgado (Plínio Salgado), it began to weaken with the arrival of the dictatorship. Until 1938, when Vargas banned the party, integrality declared that in their ranks is more than a million people, although, depending on the source, this figure could fall to six hundred thousand. After the ban, the Brazilian integralista founded the “Party of popular representation”, and then the party ARENA, although the fundamental principles remained authoritarianism, patriotism, Christianity, anti-communism and anti-liberalism economic.

Over time, in 80-e years there is a radical group los Carecas do Subúrbio. It includes young workers from the Northern and Eastern periphery of são Paulo, the economic capital of the country where currently reside twelve million people. There is also a group of skinheads los Carecas do ABC, which includes residents of the cities that make up the industrial zone ABC.

In los Carecas do ABC includes los Carecas do Brasil. This group got its name from the Central train station, where the assembled members. It operates on the entire territory of the state of Rio de Janeiro. Some of its members were accused of committing crimes of a violent nature, including murder in the Commission of which was suspected by white skinheads.

Choice of skins is Brazilian integralism, Plinio Salgado. As we have already noted, this movement is composed of white and black that distinguishes them from the foreign groups of skinheads, consisting exclusively of members of the white race, such as Blood & Honour. The police in são Paulo indicates that the majority of skins-racists is part of the Rac groupings Kombat, Front 88 and Impacto Hooligan.

They are considered more violent than los Carecas, from which they broke away in 1989 due to their radical views. White skins think of the inhabitants of the North-Eastern regions of the country underdeveloped race, and therefore clashed with los Carecas do Subúrbio and los Carecas do ABC, although the same as they hate leftists, homosexuals, and even representatives of youth subculture emo.

They are engaged in bodybuilding and different types of control. Favorite music artists — los Neuróticos, Histeria and Vírus 27. Although among meet skinhead neo-Nazis, sociologist Sergio Vinicius de Lima Grande (Lima Sérgio Vinícius de Grande), author of a study on urban violence and youth in são Paulo, says: despite its “violent actions and discrimination against specific sectors of society, each group of skinheads profess their own values and ideology.” In his opinion, “only a small part of the skin adheres to the Nazi views, while the rest are fascists.”

Lima Grande, who has studied the issue, argues that los Carecas do Subúrbio avoid ties with any parties. They initially arose among the punks of the 70s and still is an anti-racist position. But los Carecas do ABC feel nostalgia for integralism, a positive attitude to right-wing political forces, while the white skins are openly under Nazi slogans. The only thing that unites them, in addition to the unwarranted violence is patriotism and hatred of homosexuals.