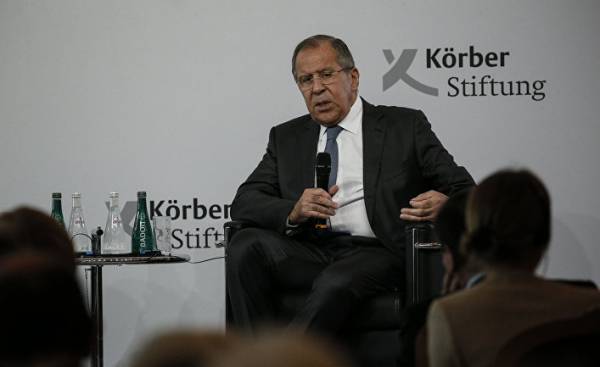 Europeans regrettable, said the Russian foreign Minister. For many of the problems of security is not solved, due to the increased tension in relations with the United States — from climate change and poverty to hunger in the world. And instead of increasing the threat of terrorism and the problem of migration.

Sergei Lavrov, a professional politician, speaking in Berlin at the invitation of the körber Foundation on the theme “EU and Russia in a changing world”, and he has a ready-made consolation for weary Europeans: “It’s not in our nature to be vindictive, and to cheat”. That should mean: the potential for “peaceful situation between the EU and Russia” would be still great if the Europeans did not allow the Americans to incite itself against Moscow.

In a respectable hotel “Adlon”, directly at the Brandenburg gate, Lavrov says that Russia was behind the reunification of Germany at the time when “some of the partners of the coalition didn’t want it.” Also in the recent past Russia, according to him, has always pursued an exemplary policy.

The crisis in Ukraine? He was “provoked by short-sighted policy of the United States and the EU, while Moscow wants to see a democratic and stable Ukraine,” which “is not created artificial Russophobia”. The Annexation Of Crimea? Where there! The local regional Parliament was, according to him, the only legitimate authority at the time the Nazis seized power in Kiev, and the decision of the Parliament about accession to Russia was carried out.

Interference in elections in the United States and elsewhere? This, they say, “flattering that we are considered a country that directs the destinies of the world” — ironically the Minister. However, so far there is no evidence about the alleged contact between the team of trump and Russian officials. About such trifles as hacker attacks on Democrats, which even the chief Lavrov Vladimir Putin called the possible case of “Russian patriots”, the better it generally will not reply.

No crime and no punishment

He takes himself as the antithesis of Dostoevsky: no crime and no punishment. Russia did nothing wrong. This, according to Lavrov’s vision, the Americans have created a dividing line after the collapse of the Soviet Union. The fact that the then Washington under George Herbert Walker Bush (George H. W. Bush) in fact tried very hard to keep a reformed Soviet Union, which finished when Russians and Ukrainians, in this novel nothing is said.

Could flawless Moscow at least to do so in Chechnya killing more homosexuals? About it, unfortunately, Lavrov nothing knows.