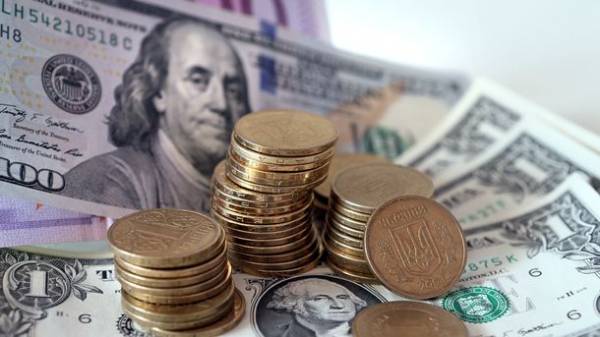 In July-September, the Ukrainians expect the decline of the average salaries and reduction of public debt of Ukraine. This will continue to increase prices and unemployment. This is an economic forecast for the third quarter of this year, compiled by experts specifically for Today.

PRICES. In the third quarter, analysts expect a rise in prices on 5 – of 13.2% compared to the second quarter of 2017, which means that infl Asia will accelerate. Yet, according to the state statistics service, last month rose 3.3%.

According to the head of information-analytical center Forex club in Ukraine Nikolay Ivchenko, in September prices will rise faster than in other months of the period: “September is the beginning of a new school year, the resumption of active business season. I wish inflation was below 13% to improved conditions for doing business but probably inflation will decline until next year.”

The acceleration of price growth in September, says economist Ivan Nikitchenko, but he’s more optimistic — for the first three quarters inflation will be 7%.

COURSE. Head of the Secretariat of the Council of entrepreneurs under the Cabinet of Ministers Andrei Zablovsky believes that the exchange rate at the end of III quarter will be 26,5 – 27 hryvnia to the dollar (now — 26 UAH). “The pressure on the foreign exchange market in this period may increase due to the seasonal increase in demand at currency and, as a consequence, activation of speculators,” he says.

In turn, the Director of energy programmes of NASU Valentyn Zemlyansky believes that the hryvnia could fall to 27.5 UAH per dollar. “There are no prerequisites for the strengthening of the national currency. And the growth in the volume of purchases of energy carriers, the payment of external borrowing by a decline in exports can lead to weakening of the hryvnia,” — he said.

SALARIES. Here the opinions of the experts diverged is the range of the average salary of their estimated 6 to 7 thousand UAH, on average, 6550 UAH, which is almost 300 UAH less than in the second quarter. However, Andrew Zablovsky believes that the increase in business activity in the country and a partial increase in wages in the corporate and gassector will lead to the fact that the average salary in the country will rise to 7 thousand UAH. The analyst of Agency “MPP Consulting” Paul Miller agree with this, but associates the wage growth with the shadows. 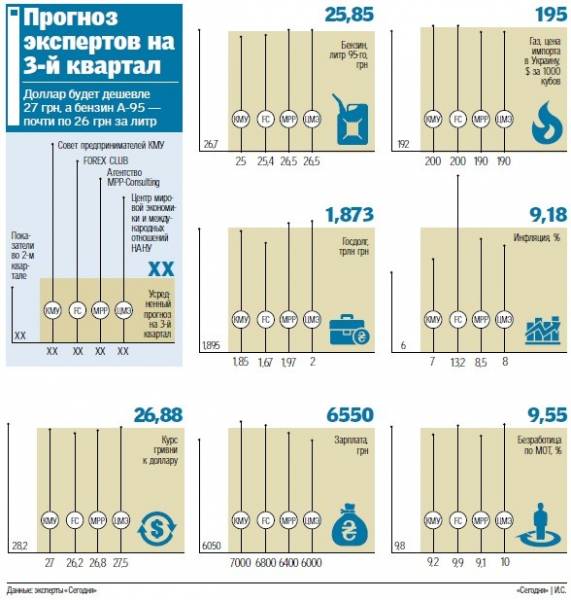 PETROL. Fuel slightly more expensive. “We expect that by the end of September the price of 1 liter of A-95 gasoline could rise by 2% to 25.4 UAH. The main reason for the price increase — the increase in world oil prices. It is expected that Brent price will rise to $ 55 per barrel,” — said Ivchenko. Zemlyansky cites a figure of 26.5 UAH per liter and predicts that the fuel will go after the course. Today a liter of gasoline on the average across Ukraine is 24,85 UAH.

DEBT. But Ukraine’s total debt (external, internal and government-guaranteed) in the third quarter will start to decrease. According to most experts, in September it will be around 1,83—1,85 trillion UAH, that is less than 50 billion UAH.

“This decrease is due to payments on external and domestic public debt,” says Zablovsky.

However, Nikitchenko, in turn, put the figure at $ 2 trillion UAH, and notes that the national debt will grow in proportion to the dollar.

UNEMPLOYMENT. The most negative forecast for unemployment gives Zemlyansky. According to him, in September of the unemployed will be about 10% of Ukrainians. Slightly more optimistic Ivchenko, calling to 9.9%. The most positive forecast from Zablovskogo, a prediction of 9%. “The increase in employment is primarily associated with the increase in economic activity,” he says.

GAS. Miller believes that price spikes for natural gas is not expected. Agree with him and Zemlyansky: “there are No prerequisites for sharp fluctuations in prices, and the price will be $190 per thousand “cubes” of gas”.

The consensus forecast for “Today” for the second quarter of this year was fulfilled by about 75%. Experts are almost accurately predicted the level of unemployment in Ukraine. At the end of June, the state statistics service gave a figure of 10.1 per cent (1.8 million people), while our experts give a forecast of 9.8 per cent (1.76 million).

Analysts also pretty sure “hit” with its inflation forecast. Recall that in the second quarter, according to them, she had to be 6%. According to state statistics, this figure was 6.2%.

But with the dollar some experts are lost. According to them, the second quarter was supposed to end at the level of 28.2 UAH/USD. The last two months the national currency is kept at -26 25,9 USD per dollar.