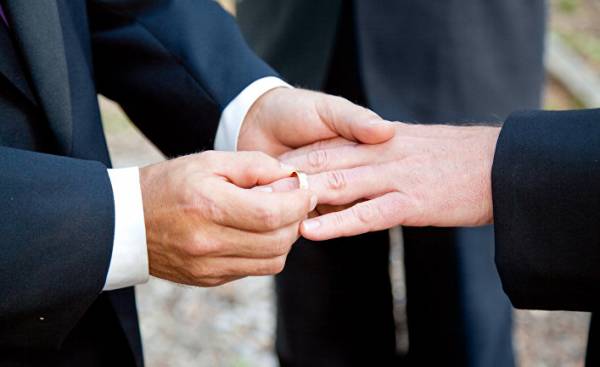 On Friday, June 30, 393 deputies voted for the approval of a bill granting same-sex partners who marry, exactly the same rights as traditional marriages. While 226 MPs voted against, four MPs abstained. It is noteworthy that among those who voted against this legislative innovation was and the Federal Chancellor Angela Merkel (Angela Merkel). It is more surprising that Frau Merkel actually initiated the vote in the Bundestag on this subject.

Recall that three days before the issuance of the bill for hearing in the main Parliament MS state Chancellor unexpectedly announced that the decision on this issue all members must accept the “call of conscience”, and not guided by party discipline. It is clear that after such statement the proponents of the “marriage for all” included a fifth speed and made the appearance of the bill in the agenda of the last session of the Bundestag of the eighteenth legislature period. Because up to this point because of the negative attitude of the leadership of the CDU/CSU to a “complete opening of marriage” this bill was wrapped in the Parliament more than thirty times!

For Angela Merkel, daughter of a Lutheran pastor, marriage remains “a Union between a man and a woman.” That’s why she, like many other members of the government from the conservatives, voted against it. But two and a half months before the parliamentary elections in Germany, the Federal Chancellor could hardly give the subject at the mercy of political opponents. Moreover, all parties, with the exception of the “Alternative for Germany” (AfD), have long made the point about “marriage for all” in its election program. And German society, it seems, is clearly ready for full recognition of same-sex marriages. In any case, this is evidenced by the results of all past polls: nearly three-quarters of respondents.

In fact, a revolutionary breakthrough in the issue of recognition of “civil partnerships” the new law is not. The fact is that gradually, beginning in 2001, same-sex partners entering into the Union, received more and more rights similar to the rights of traditional marriages. Here the same system of taxation and family hospital insurance, and similar procedure of divorce. The only novelty is, in fact, the possibility of adoption of children who are not married to same-sex partners of biological kinship. And, of course, the extension of the wording of the expression “marriage”, which now applies to all marriages.

The decision shall enter into force on the first of November, but this may prevent one important fact, which is, incidentally, not without reason, indicates confidant of Merkel, interior Minister of Germany Thomas de Mezieres (Thomas de Maizière). After all, only ten years ago the Federal constitutional court gave a clear definition of marriage as “the Union of man and woman”, thus confirming the relevant provision of the 6th article of the German Constitution. And still the wording of the judges is not canceled. So it turns out that the law on “marriage for all” is in direct contradiction with the Basic law of Germany! In this circumstance refers to the representative of the CDU de Maiziere when he talks about the inevitability of complaints in the main court of Germany of opponents of the innovation. It is noteworthy that the representative of the social Democrats, the Federal Minister of justice Heiko Maas (Heiko Maas) recognizes that the legal field is not fully defined. According to the politician, “a constitutional amendment is desirable, but not mandatory”. Meanwhile, the “Alternative for Germany” has already stated that the party is now preparing an appeal to the constitutional court asking to declare the new law invalid.

Anyway, for many people in Germany with a different sexual orientation are full and equal recognition of same-sex marriage is becoming a new stage in their lives. It is not accidental that immediately after the vote, Federal Minister for the environment and consumer protection, Barbara Hendricks (Barbara Hendricks) has made an offer “hands and hearts” to their partner. “We entered into marriage in 2010, after living together for seven years, now we can finally formally enter into a full marriage,” said the Minister, speaking at a rally of supporters of “marriage for all” front of the Brandenburg gate.