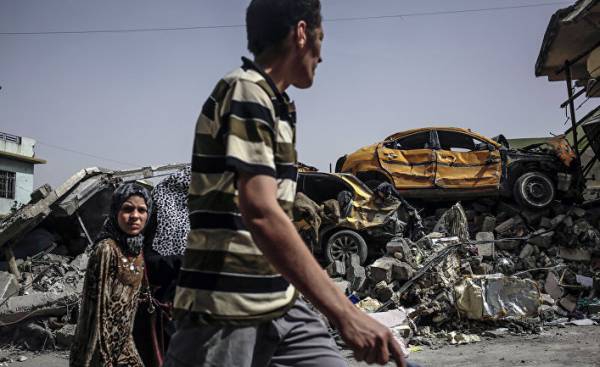 President Donald trump was in Warsaw a “Bush moment”: he could, like his predecessor, a Republican, to declare himself leader of the West in the war of civilizations. In woven from the historical allusions of the speech he compared modern Islamic terrorism to the threat which Europe, and the world was in the XX century totalitarian regimes and mass-mass murder.

Especially nice for a Polish ear (some representatives of the right flank effusive enthusiasm and spoke of “the most important speech in American history”) made a reference to trump the struggle of the Polish underground state with the Nazis, the heroism of the poles and their indomitable will. The 45th President of the United States called on Poland again, as once, to elevate the banner of civilization against the barbarians (of course, shoulder to shoulder with America) to help to suffocate the extremists and the so-called Islamic state (banned in Russia organization — approx. ed.). As recently as 15 years ago, we answered a similar call, and the consequences are felt in the world so far.

After the speech, trump in Warsaw less than a week, as ISIL, which he depicted similar to the Third Reich, a powerful and formidable opponent, more exciting territories, and numbering in its ranks several tens of thousands of militants — has suffered a defeat. Iraqi Prime Minister Haider al-Abadi arrived in Mosul, to the hum of the blades American helicopter to shake the hands of the military and to declare that the second largest city of the country back to Iraqi control. In other words, the freed Mosul, and ISIL is defeated (although with these definitions I agree not all).

Most commentators agree that the education is moving towards a final decadence. In recent weeks, the coming (still not confirmed by the American side) reports of the death of the self-proclaimed Caliph of the “Islamic state” Abu Bakr al-Baghdadi. If you really count the victory over his forces in Mosul turning point, we can say that the “Caliphate” lasted a little over a thousand days.

But why America and the rest of the world does not celebrate this victory, and on the front pages of Newspapers does not appear to jubilant headlines in the beginning of the decade when they announced the death of bin Laden? The first cynical response is: why would Trump the success and the end of the “Islamic state”, if he bring so many use fear and impotence of the West, the sense of impending collapse and the threat from Islamic terrorists? Trump can not leave the post of leader of the West in the war of civilizations, having been on it for a week. It is on this basis began to take shape trompowsky anti-liberal international, which supports his isolationist views are inconsistent with the liberal idea of globalization. New right-wing populists are in need of Islamic terrorism, as in the air.

There is another response that better reflects the complexity of the situation. It gives in his new book, “Anatomy of terror”, a former FBI agent Ali Sufan (Ali Soufan), which played a major role in the study of the functioning of “al-Qaeda” (banned in Russia organization — approx. ed.) and the capture of bin Laden (he was one of the few who owned Arabic language Bureau agents who were tracking al-Qaida, and the first “hot pursuit” were interrogating the suspects in the terrorist attacks). Suphan writes that groups like al-Qaida, which after several permutations in its management and evolution of the ideology gave rise to ISIL, have an incredible ability to revive and to continue the activities even after the most humiliating defeats. He talks about how bin Laden in 1989, ignominiously fled from Afghanistan, then returned, and in 2001, after the attack had again left the group and hid in Pakistan, where it eventually found and killed. A large part of his career he spent in hiding, and often losing influence on what is strife-torn jihadist movement. Despite his personal ambitions, and the role of “Emir”, as it was called, the leadership in the next incarnations of “al-Qaeda” passed to successors: Zarqawi, Zawahiri, Baghdadi.

Now al Qaeda and ISIS (in Syria and Iraq, there are a couple dozen other armed organizations) are in conflict and waiting for the opponent to fail. In this Suphan sees the main threat. The defeat of the “Caliphate” will lead to the collapse of ambitious plans to create a quasi-state, which leads the fight against world powers and the international coalition, and force the jihadists to return to old-fashioned tactics of guerrilla warfare, acts of terrorism and destruction of other countries from the inside, as well as planning new attacks on Europe and the United States.

Suphan warns that in the last thirty years, no one defeat the jihadists did not stop them to create a new organization. Al-Qaida and similar forces are now surprisingly in a comfortable position: they can wait out the difficult period and, reordering their ranks, to strike in the future. At the same time, about 30 thousand militants from Russia, Europe and the Middle East who have joined ISIS, will begin to seek asylum. It is difficult to hope that they will return home (or take them there).

The third reason why few in the West celebrates the liberation of Mosul, prosaic: the city lies in ruins, and the Iraqi state is in slightly better shape. They say we love “bringing help to places”, but so far no one is eager to rebuild on the ruins of the Mosul state and public institutions. Although it can be expected that any country from day to day decide to care about oil and pipelines. Today’s “war on terrorism” is different from the war the Bush it is this: it is devoid of the aura of “democracy promotion” and “nation-building” (which would be a tragic failure they were in his first version).

Even the most optimistic and willing to Iraq only good observers see a lot of problems. Hope that these problems are now worried about trump’s ridiculous. “The end of ISIS” nothing ends. Including the fact that some of the war on terrorism is vital.