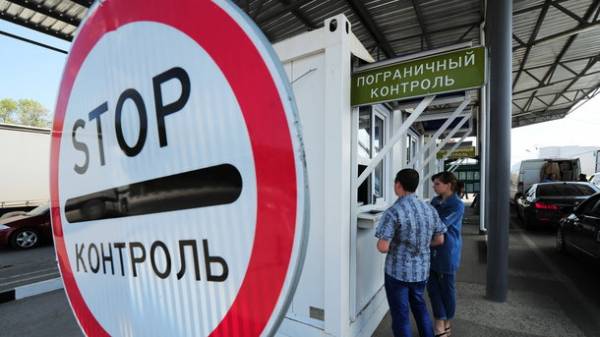 With the introduction of a visa regime for citizens of the Russian Federation decided to wait. Instead, presumably from 1 January 2018 will earn a pre-registration system, and the check will be carried out exclusively on biometric passports. This decision was made on Monday evening at the meeting of the NSDC. Until the end of the year, all of the checkpoints on the border with Russia will be equipment to read the biometrics and database access of Russians registered in the pre-registration system. Perhaps this service will be paid, as, for example, in the United States and Canada. But this issue is still under discussion. Russia is already preparing to enter the mirror measures, which will certainly hit our workers. Ukrainian lawmakers and officials say tighter rules of entry for Russians overripe step and advise Ukrainians who work in Russia, to go back, as the Kremlin probably will further complicate the rules of employment of foreigners.

In the third year of the war with Russia, Ukraine decided to tighten the rules of entry for Russians. According to Petro Poroshenko, we are talking about biometric control for all citizens who cross the border. “We need biometric data, including fingerprints, a digital photograph. This will greatly enhance the possibilities to combat terrorism,” – said the President of Ukraine at the meeting of the national security Council, giving the head of the interior Ministry Arsen Avakov the order to equip a major border crossing points with equipment for fixing of biometric data. For purchase, as well as increasing technical protection of the border from the state budget will allocate UAH 600 million.

In addition to the biometrics Russians who want to visit Ukraine, even in Russia must complete the online form, which will specify the purpose of travel, place of residence for the period of stay in Ukraine, etc. “Russian in Russia comes to a site and performs an electronic check of the future crossing the border, stating the purpose of visit, place of stay (place of residence during the stay in Ukraine – Ed.) time of entry and exit, etc. Specialists must complete this questionnaire. And be sure to biometric passport”, – told the “Today” adviser to the interior Minister Zoryan Shkiryak.

This pre-registration system should make before 1 January 2018 and will include a list of personal data to the Russians in an online form, which will determine the foreign Ministry. Thus, according to the Minister of foreign Affairs Pavlo Klimkin, is only the first element. In the next phases, he said, will be introduced a mechanism of control over the movement of Russians in Ukraine. “So I consistently and it’s approved, the next stages will also control, but it will be clearly aimed at the threat that we have is in Russian Federation. Ukraine need a comprehensive response to the terrorist threat that Russia is creating in Ukraine”, – said Pavlo Klimkin.

How did you learn of the “Today” discussions are also under way to make this pre-registration fee. This system has been working in the United States and Canada. For example, for visa-free entry to the United States must obtain permission of the electronic system for travel authorization ESTA. An online form with questions about the purpose of the visit, place of accommodation during the stay and the estimated date of departure, you must fill out no later than 72 hours before departure. Filling out one online form will cost $14. Without authorization electronic authorization system entry to the States will be denied. A similar system operates in Canada, but it is much cheaper – a little more than $5 for filling out one online form.

“We are considering the introduction of paid electronic filing – told the “Today” sources in the Ukrainian dipkrugah. Perhaps this will be 50-100 UAH for completing one of our online forms, maybe more. But in any case, you need to cover the cost of purchasing additional equipment and create a new database of Russians, who will travel to Ukraine for pre-registration”.

In Russia, commenting on the decision of the national security Council, threatened the mirror measures. According to first Deputy head of the Federation Council Committee on defense and security Franz Klintsevich, reciprocal steps will be followed and may affect 4 million Ukrainians working in Russia. “The introduction of a system of advanced electronic registration for Russian citizens entering Ukraine, or the so-called biometric control is, in fact, the establishment of a visa regime between our countries, and its packaging does not matter,” – said Klintsevich.

Now between the governments of Ukraine and Russia, the Agreement of 1997 on visa-free travel. How much for these three years, there were discussions about his denunciation, but the Cabinet has not taken this step. A year ago, the initiative was intercepted by the Verkhovna Rada. Popular front demanded the introduction of visa regime with the Russian Federation. The idea was picked up in the Radical party and “Samopomich”, registering a decision-an appeal to the Cabinet of the authorship of 21 MP on denunciation of the Agreement of 1997, and in fact, the introduction of a visa regime with Russia. The document is long, spend too much time in the relevant Committee on foreign Affairs. In the end, after all the comments of the foreign Ministry, security service and border guards in March the Committee approved the resolution and recommended to bring to a vote in the hall. It several times even included in the agenda, but speaker Andrew paruby never put the document to a vote.

Despite the fact that the adoption of the resolution would be purely a political gesture, because the decision is still made by the Cabinet upon the proposal of the foreign Ministry, the Verkhovna Rada did not go for it because of the position of the Pro-presidential faction. Most members of the BPP opposed the introduction of a visa regime with Russia. “And you thought how much it will cost us the opening of new consulates and diplomatic missions abroad? And the issue of visas? I guarantee that the amount would be higher than the current 600 million on the introduction of biometric and electronic pre-registration. And if Russia in response to the introduction by Ukraine of the visa regime and even broke off diplomatic relations with us? What we do with our workers?”, – said the “Today” one of the deputies from the BPP.

In the comments of the Ministry of foreign Affairs to the decision-the appeal to the Cabinet stated that the introduction of a visa regime with Russia will complicate the procedure of Ukrainians traveling to Russia, especially the elderly and children, and will not significantly affect the strengthening of national security and the stabilization of the situation in the Donbass, given the uncontrolled area of the border in km. 426 “Biometric control and pre-register electronically solve all the issues, which says a visa regime, but this is more elegant and smarter. I understand that some people for political motives is to say that it is “zrada”. But we are de facto introducing a visa regime without naming it so. Don’t forget that 4 million Ukrainians somehow work in Russia. This is a Russian figure, I think, a little less, somewhere 2-2. 5 million (according to data of the state border service in 2015 in Russia had left 4.1 million Ukrainians – Ed.). But it’s still a huge number of people”, – said the “Today” people’s Deputy from BPP Vadim Denisenko.

In the NF, Radical party and “Samopomich” will still require the introduction of a visa regime with the Russian Federation, considering the decision of the national security Council and the lack of interim measures. “Obviously, it (the introduction of biometric and electronic pre – registration- Ed.) caused by certain diplomatic restrictions, which are unknown to us, we can only guess. But I believe that in this way we agreed on the interim measures, and you need to demand the introduction of a visa regime. Well, we will be able to clearly establish the time of crossing the border. But the visa regime means that we already know about the purpose of stay of foreign citizens, time, place of residence and in advance, not after the fact make a decision on admission/non-admission of persons”, – said the “Today” people’s Deputy Leonid Yemets from NF.

In any case, even the introduction of biometric control systems and pre-registration will significantly complicate the life of Ukrainian “guest workers” in Russia. Moscow will not miss the opportunity, for example, to tighten rules for foreigners in Russia. According to Ukrainian parliamentarians in Russia have long been developing the introduction of reflex action, and our “workers” suggest to return to Ukraine, because in war it is a question of national security.