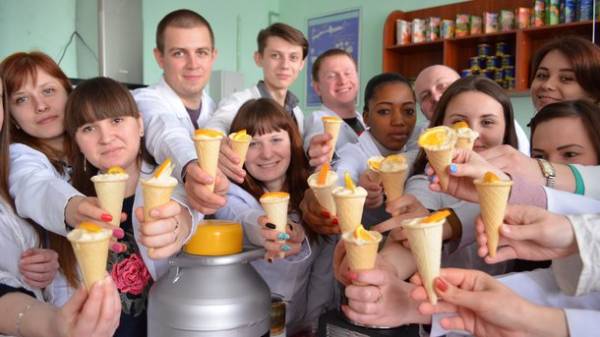 Milk in capsules, krioporoshok and dough in the bottle. Sounds incredible, and seeing these products for the first time, can doubt that all made without dyes, preservatives and flavor enhancers. However, the Kharkov scientists insist otherwise: the food of the future could be useful. “Today,” visited the laboratories where they create new products.

Nanoed born in uchebno-scientific Institute of food technology and business, which is the most powerful scientific potential and the largest in the Kharkov state University of catering and trade. Crossing the threshold the Institute, pay attention to a large number of laboratories are hard at work. Here students apply the theoretical knowledge and practice their skills as future technologists: prepare, bake and carry out chemical analysis of products.

Students and teachers cope skillfully with modern equipment: cryogenic software freezer, dryer, preconventional oven, low temperature grinder, and other difficult units. In the Institute trying to solve the problem of the power not only of Ukrainians, but of all mankind.

“Scientists are forced to develop new foods that will help to survive, because a large part of the population is starving. Another global issue in the world — a deficiency in the basic diet of biologically active substances, and to look for ways to preserve everything of value that is in raw materials,” — said Professor of the Department of technology processing of fruits, vegetables and milk Victoria pogarskaya.

So, using liquid nitrogen, the Department learned how to make healthy ice-cream from crushed fruits and vegetables. 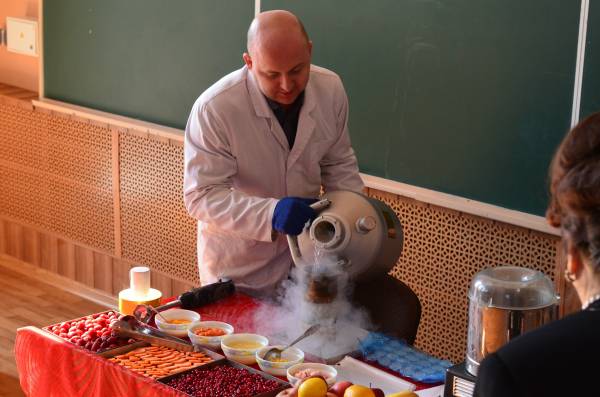 ON THE SHELVES. Invented by Kharkiv specialists snacks, fruit jellies, desserts and Juliani in jars long won the recognition of Ukrainians. But scientists are not resting on our laurels, developing encapsulated products.

“Our scientific team working in this area for eight years. The first problem we had to solve is to make imitation caviar. On the market at that time offered protein eggs, but her balls resembled rubber, not burst, contain flavorings, colorings, and sometimes fish ROE. We wanted to do an imitation of capsules that will burst. As the shell used sodium alginate — a natural extract of brown seaweed, added calcium salts, it is absolutely a natural product, and came up with the very capsule like shape. Products are fully replicates the natural spawn of valuable fish species,” — said Professor of the Department of food technology Evgeny Pivovarov.

Such eggs-simulation launched one of Kharkov companies. Technology adopted also by the Spanish, American and Russian manufacturers. 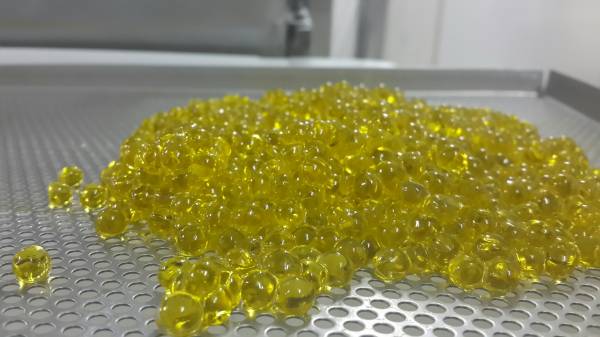 The oil in the capsules. For salads

After that, the capsule decided to place the juice, fruit puree, vegetable pulp, a filling for olives and even milk. Natural fruit balls offer to add in yoghurt, milk shakes and curd desserts. Kharkiv takamalirawo mustard, mayonnaise, ketchup, and even worked out the technology of adding beads to the inside of the sausage in the creation process. “Hot dog will not need to pour ketchup or mustard, because the sauces are already inside,” says Brewers. Vegetable oil capsules will help to increase the shelf life and improve the transport of fresh salads and appetizers. “Now in fast food salad dressing separately to give sticks, but their production is costly, because it requires separate packaging. Capsules also can be directly added to a salad, but burst they will have during meals, the salad will not go bad due to contact with gas station,” — said Evgeny Pivovarov. 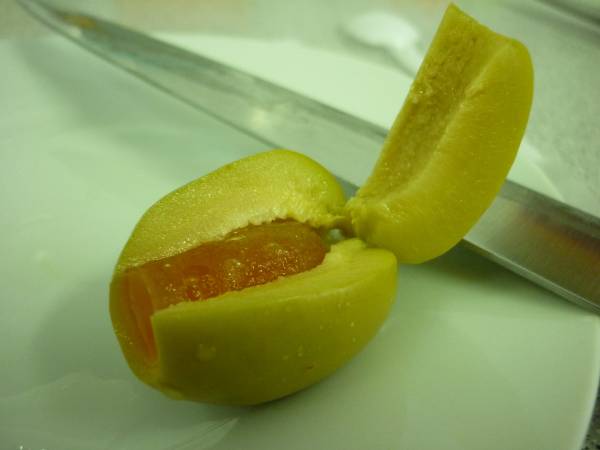 FOOD FOR THE ARMY. Now scientists are planning to update the nutrition personnel. “For help, we turned to the experts of the National Academy of national guard of Ukraine. We will analyze their diet and suggest ways it can be improved without large costs,” — said the Director of the Institute Maxim Serik. Together with the Kharkiv confectionery factory, scientists have released an energy bar a “Winner”, which can be taken in the field.

“Technology together with doctors to ensure the quality of human life. Control of chemical, physical and biological processes occurring in food systems — the main tool of technology that allows you to implement ideas and get new products. But we are not afraid of the term “chemistry”, we just understand,” — said Maxim Serik. Annually the specialists of the Institute of patent of its own development and has earned two national awards in science and technology. Know-how of Kharkiv citizens employed in Poland, Spain, France, USA and Russia. 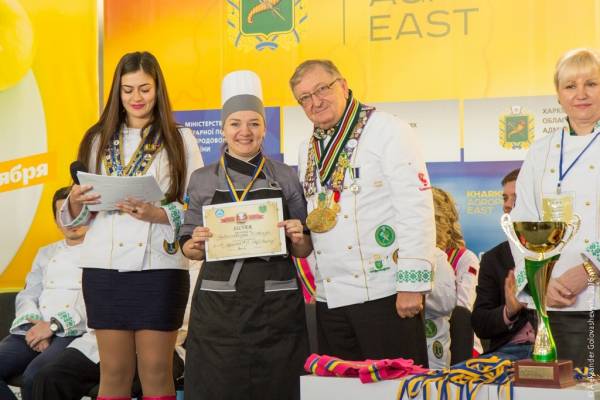 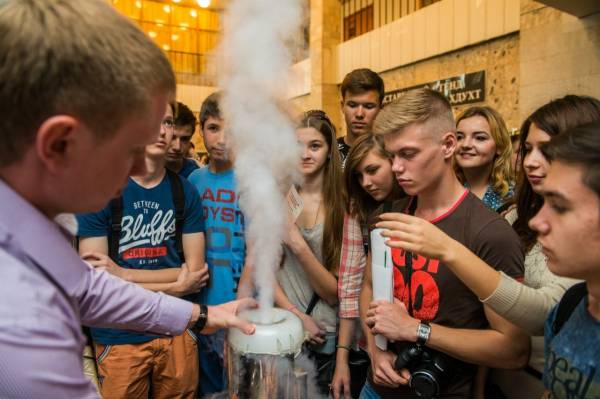 Development. Have a surprise 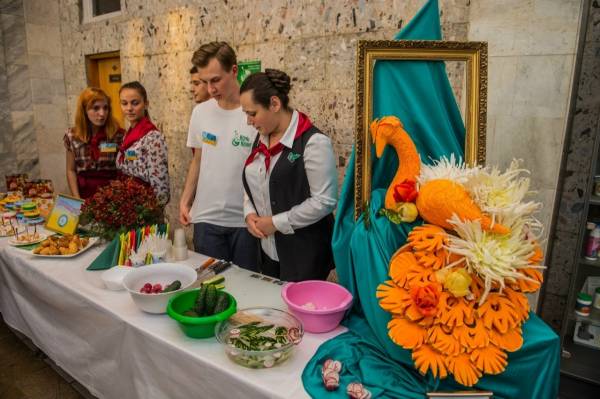 Tasting. Every year in GUPT spend a “delicious” Night of science

TO ENRICH THE DIET: POWDERS OF VEGETABLES

The Department of technology processing of fruits, vegetables and milk are concerned about unbalanced diet of modern Ukrainians and the lack of nutrients in the diet. Professor, Department of Victoria pogarskaya says: one of the reasons of food deficit, large losses of nutrients by traditional methods of processing products. The solution of the problem scientists have found new methods of deep processing of raw materials. One of them is cryogenic (after freezing) chopping vegetables, fruits and berries. In the result of them get dietary supplements in the form of powders, pastes, extracts and phytoconcentrates. It may seem incredible, but in these supplements three to four times contains more biologically active substances than in the feedstock, and they absorbed better. For these scientific researches scientists of the Department received the national award in science and technology.

FOR SAUCE AND DRINKS. To make supplements use traditional vegetable raw materials: carrots, pumpkin, parsley and dill, pepper, cabbage, black currants, apples. Powders and pastes based on them helped to create many new products, e.g., sauces-dressings for salads, thick sauces and dips, ketchup, combined dairy products, frozen desserts. Biologically active extracts and vegetable cryopathy enriched milkshakes and drinks. Interestingly, the particles of the vegetable powders are so small (100 times smaller than conventional powders. — Ed.) their taste, however they are much healthier than jam or jelly, which are often administered in yogurt. Unlike foreign analogues, obtained in all Kharkovites product no synthetic components. The Department say, on the basis of such dietary supplements, you can create a lot of useful Goodies.

The creators of the food of the future have already developed several products that are now widely used by cooks and confectioners. The popularity of got and poppy-seed filling. “It is more delicious, finely divided and free of harmful components,” praises Victoria pogarskaya. In confectionery products, e.g., croissants, jelly use thermostable fillings based on fruit purees, which are also developed in the laboratories of Kharkiv.

USEFUL POLLEN. The world’s first scientists of the Department had destroyed the cell wall of pollen. “The fact that this unique product is not absorbed in the gastrointestinal tract, the shell of pollen is so strong that is not destroyed neither by boiling for several hours, under mechanical influence or under the influence of gastric enzymes. When this pollen has a high nutritional value, which is not in other products of natural origin, and, according to doctors, contains many amino acids and vitamins. We have found a way by which we get from the pollen easily digestible powder,” explained the Professor. On the basis create new therapeutic and preventive products. Developments of the Department are used at the enterprises of Ukraine, Lithuania and Russia. 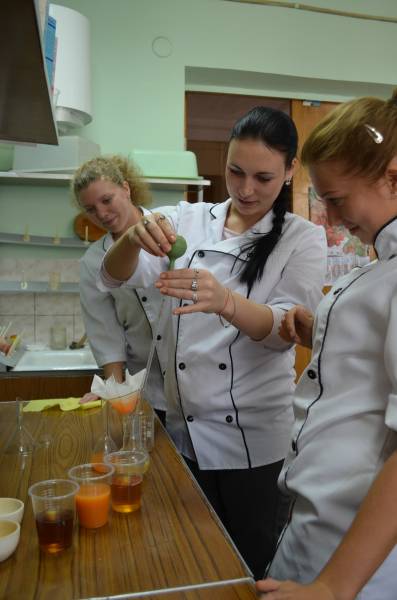 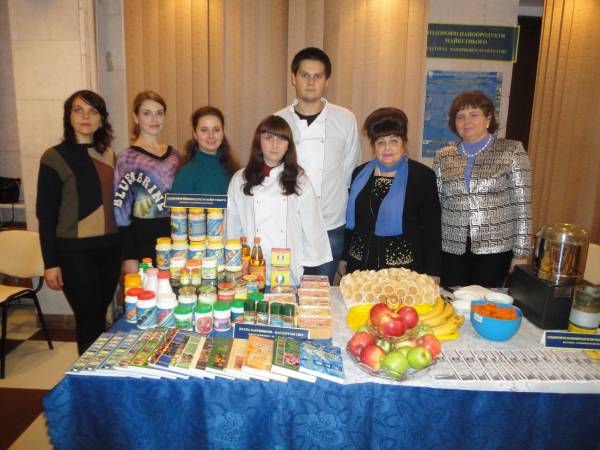 The Department of technology of bread, confectionery, pasta and food concentrates are puzzled over how to make many favorite sweets healthier. “We are looking for the ability to reduce the content of sugar and fat, adding at the same time, healthy ingredients — vitamins, minerals, dietary fiber and polyphenols. This is the main direction of research work of the Department. It is obvious that the trends in food production in 10 years not much will be different from today, but 20 years from now balanced diet will become more in demand,” — said the head of the Department Olga Samokhvalova.

FROM GRAPES. Ahead of time, Kharkiv specialists along with students worked the recipe is “useful” bread and offer manufacturers add in wheat germ, the remains of the seed oats and corn. And jelly and caramel — to introduce the useful additives of plant origin, which are natural dyes. For example, a very bright color gives a water-soluble powder of hibiscus who offer to tint a marmalade and marshmallow.

Soon on the shelves of Ukrainian shops may appear unusual candies with natural antioxidants. Their source is grape waste, tons of which are formed after the production of wine and juices, which are produced in the southern regions of Ukraine.

“According to the latest data, in 50 years, cacao beans can be a real deficit, cocoa powder and chocolate many will not afford it. Already today, high-quality cocoa powder is a lot of dishonest manufacturers which not only add to save,” says Samokhvalov.

Kharkiv specialists with one of the Odessa companies decided to add in the chocolate and confectionery icing powder, grape seed as a partial substitute for cocoa powder.

“He even aroma reminiscent of cocoa. Most importantly — it is useful. It is known that the grapes are primarily rich in antioxidants that positively affect the body,” says the Professor.

Ukraine has already produced a trial batch of candy with this glaze, and, according to experts, they have performed well in taste, and in storage. But with the grape skins in Kharkiv, the students came out of the laboratories and biscuits, the peel is similar in taste to raisins. The Department assured that in the future the food industry will be actively applied to non-waste technology.

In Kharkov, we developed a powder mixture for the quick test, the grape seeds was replaced by cocoa.

THE DOUGH WITHOUT THE HASSLE. Kharkiv also has developed dry mixes for home baking, for example, Browns, and pancakes. Having the kitchen is such a set, for the dough, simply add powder to water. In terms of technology — to create the batter for example, that the United States is sold in bottles. 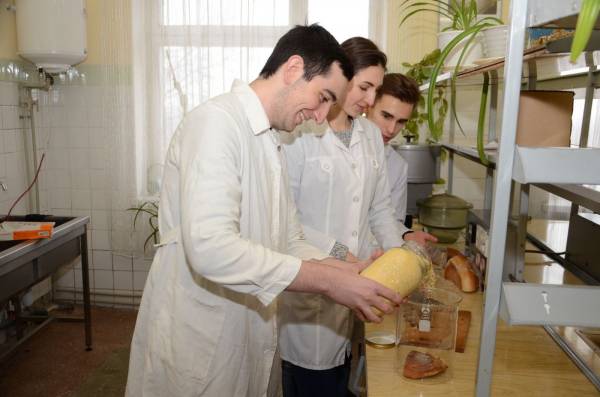 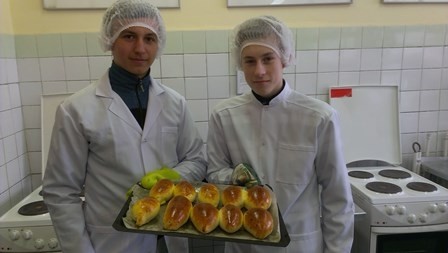 Kharkiv team and develop new ways of packaging products. Specialists of the Department of technology of bread together with scientists of the National technical University “KHPI” has created biodegradable packaging from starch, which is rapidly degraded in the environment. Another novelty is absolutely harmless coating, which can be eaten together with the product. Film-forming solution is applied to the bread or loaf. Such packaging keeps the product fresh, slowing down the processes of microbial spoilage and oxidation.
Food industry scientists are not limited to plan and implement development — capsules — in pharmacology. “There are different probiotics in the form of sachets and powders, but a large number of these life-giving strains do not pass the gastric barrier and enter the intestine. We raised live strains in the human intestine, and takamalirawo them in their natural habitat — milk whey. The capsule passes the gastric barrier, it dissolves in the small intestine, live bacteria in the right quantity get where they need to work,” said Professor Evgeny Pivovarov. Now scientists are trying to put in capsules insulin and aspirin to dissolve not in the stomach.