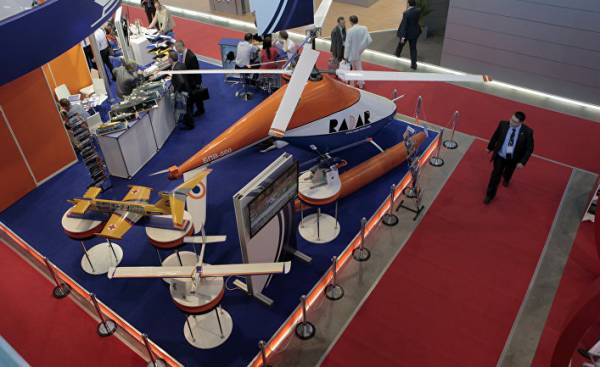 Recently giving an interview to the Russian information Agency “RIA Novosti”, the Deputy Prime Minister of Russia, Dmitry Rogozin, has made some interesting statements about the status of military unmanned aviation in the country. Speaking about the backwardness of Russia from such leaders in the construction of UAVs as the US and Israel, Rogozin said with confidence that this gap has narrowed, and that soon it will be completely eliminated. Rogozin stressed that we are talking about unmanned systems, reconnaissance and attack character. According to him, “there is no reason for concern about some of the technical backlog… From the point of view of the development of communication channels, from the point of view of the presence of weapons, from the viewpoint of unmanned systems, I can say only one thing — not going to talk about some lag. It drastically reduced and will soon be completely eliminated.”

If Rogozin gave an interview this year that way in 2025 or 2030, his statement could apply to the truth — to a certain extent. Russia is currently trying to create a series of drones, implementing a variety of projects from small drones and UAV medium to quadcopters and multirotor models, unmanned helicopters and big cars, long-range, able to carry a gun on Board. For example, during the International naval salon in Saint Petersburg, Russian company “Radar MMS” has introduced several models of unmanned helicopters, including a large prototype GSV-500, capable of carrying a weapon on Board. Also noteworthy silent drone reconnaissance and surveillance-type aircraft ZALA 421-16Е2, which is one of the latest developments of the concern “Kalashnikov”. In fact, news about the development, testing and evaluation of UAVs appear in Russia almost every week. But for the most part this information on prototypes and experimental aircraft, and also, its characteristics are clearly not up to those thousands of American and Israeli drones that are used every day all over the world.

Indeed, Russia made a qualitative leap in the use of small UAV reconnaissance and surveillance to the conflict in the East of Ukraine and in Syria that led to higher efficiency of fighting against various opponents. But it’s hard to believe that the application of the Moscow small number of simple in technical execution of unmanned aerial vehicles, able to conduct only reconnaissance and surveillance missions, led to a significant reduction in the backlog from Israel and the United States. Moreover, Russia is still using Israeli-made UAVs. The biggest range of Russian drone “Outpost”, and is a licensed copy of the Israeli UAV Searcher. Even the recent statements that Russia will build an upgraded version of this UAV, underlined the continuing dependence on imported technology.

In addition, Russia has long been trying to create combat drones level American Predator and Global Hawk, as well as Israeli strike UAVs, long-range, but great progress in this direction, the Russian defense Ministry and the military-industrial complex is not achieved. The project of creation of the heavy long-range UAV “Altair” (“Altius”) is suffering from delays and overruns of estimated costs, which prevents its adoption, although a few prototypes were with great fanfare presented at the landfills. With the creation of combat drone stealth “Hunter” is also a big problem as it is on the drawing boards and in various stages of development and testing since 2009, and now in public statements they say that it will be put into operation in 2018. Military exhibitions and symposia are other combat drones, showing them mockups, but no working sample are not yet available. It seems that in the near future in the development of combat drones Russia is waiting for one success, and it will be a small UAV T-16 to be launched from the catapult and capable of carrying six kilograms of payload.

It is not excluded that in the conditions of steadfast attention of the Russian military establishment various types of unmanned systems, the armed forces of the country will eventually get its long-awaited combat drones. In addition, the Russian military will continue to purchase a small UAV reconnaissance and surveillance, which at the moment they have 2 000. However, it hardly can be called “gaps” or even achieve parity with countries where work on the creation of unmanned systems rely on the powerful financial, industrial, intellectual and political support. Maybe Rogozin was referring to the fact that despite the weaknesses and limitations faced by Russia in the construction of the UAV, its military has made significant progress on the battlefield, surprising observers from many countries. Rogozin’s statement can also be interpreted in the following manner: as regards the Russian military “parity” with American and Israeli UAVs means that a high level of technology achieved by the Western drones, and the ability to effectively set and achieve goals less than the Americans and the Israelis, the number of drones, which is not so perfect. Anyway, the coming years will be very important for Russia in terms of development and production of military unmanned aerial vehicles as in many projects, and work samples should be created and go to the series in the period from 2018 to 2020. Time, as well as Russia’s ability to cope with the state orders for arms show, will it turn Rogozin’s words into a workable solution for the Russian military.

Samuel Bendett researcher working at CNA Corporation and writing for a blog RealClearWorld.com. He previously worked at the National defense University, focusing on issues of new breakthrough technologies and their use in crisis situations.

The article presents the personal views of the author.