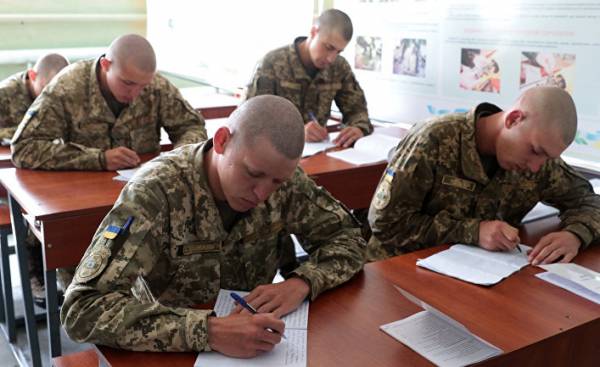 All too often I hear the words “scoop returns to the army,” or “to return Soviet army”. And these words sound more and more often. And I say this not only soldiers. I heard these words, and in the General staff. And from the colonels and generals. And by the way, both generals of the army, too. Muzhenko and Poltorak notice.

And that not a single gram of happy. Trying to find ways across the army, how to prevent it. And the army is overdo***yn a variety of people. At least not yet. While we do not have competition at every position. But sovdepovskogo approach this will never happen. Here we have the problem. A vicious circle. But let’s look slowly.

For me, for a long time, the answer to “why does the scoop in the army,” lies on the surface. But no understanding of what mechanisms can break this vicious circle.

Actually, everything except the way to attract people to serve in the army, remained on the scoop. Here there is a contract and all. This army contract is over. All reports, all assessments of effectiveness, all relationships were old.

Differed old army forcibly drove a bunch of people in a limited space. The people for the people did not think, because thinking is not necessary, I say what to do. The biggest problem was to take people to x***d did not suffer, that was not an emergency. Injuries, injuries, deaths, drinking. This was the system of restrictions and protections. Each step is regulated so as not to give either to think or to do, and most importantly, to prevent an emergency.

But now the army contract. And the soldier all the same. As for the red army. The soldier, still, is not an independent figure. He was forbidden to think and to do for his commanders think, and he think of restrictions.

But! He’s also a professional soldier, as the commander. It needs to make decisions and be held accountable.

Otherwise we’re back to the red army. In the General staff understand that it is impossible to achieve quality, not increasing the number of freedoms. There is a lot of money to a free man aspired to be for three years powerless cattle. Especially smart. Especially specialist.

Standard work days, weekends and the right to dispose of his free time. This is the minimum that will allow people to want to serve. It is known in the General staff. And through it the US army. Person has the right, after outfit, after his day’s work, to go to the city or village in civilian clothes. And by the way, it’s already working in “Azov”.

A day at the range, in the evening in a cafe in shorts, night in the barracks. In the morning again on the ground, rested and motivated.

The idea is that this is now possible. Took the brigade commander and released in dismissal from the landfill unit. But the problem — the responsibility lies on it. The brigade commander. Because it is not common practice, and out of the ordinary phenomenon.

According to the same rules. But if swell fighter and flies, then there will be problems with the brigade commander. And if the fighter in FB account has, and even the volunteer, the brigade commander still can not punish. Because the journalist will write how the patriots are oppressed. Now spinning the officer, that winds between the rain drops. And of all the evils choose the lesser. Because by law the right to rest in addition to leave a fighter there.

You know what’s scary? The worst thing is that the scoop in the army return, not generals. Scoop into the army returning military officers who passed through the war and grew up during the war for two or three or more Posad.

The company commander, battalion, brigade — fighting and works well with soldiers and Junior commanders in war.

But as soon as the war ends, the truce, the rotation and everything. Ends the interaction of the military and starts the interaction by the rules of the red army. Because there is no other. Not at all. Because on all occasions written what and how should the officer and soldiers, but it is not suitable. Because it is written in the soldier — not a free citizen, a professional soldier soldier-the contract employee, and silent cattle designed for the deferral of the red army. All. A dead end. Does not work under the old rules to communicate and cooperate. And no new. From Taka x***I malyata.

I don’t know what we can do about that. But to do something. Yesterday. Otherwise, we lose it all the achievements obtained during the war. And devour the army not the people. And the rules and regulations of the Soviet era. Because any deviation from the instructions and duties described in them is a crime and the article. And all these instructions are not written for a professional army.

How many military officers have already cut that are unable to adjust to the rules paperboy army. That is, it is. The only way is yesterday to rewrite all the army of the new type. Where is the soldier-the contract employee is responsible for himself and for his actions. And watch it needs sergeants. Such as professional military as officers. As soldiers. Only more knowledge, experience and responsibility. Because the soldier is as an employee as a hairdresser and chef. The arms? So it’s just his instruments of production. Which he ought to know, to care, to cherish. Like scissors at the hairdresser or knives to the chef. If he is lazy or an idiot, he just needs to drive. And that’s all. You need to trust the soldier. He’s a professional. The same professional soldier like you, comrade major/Colonel/General.