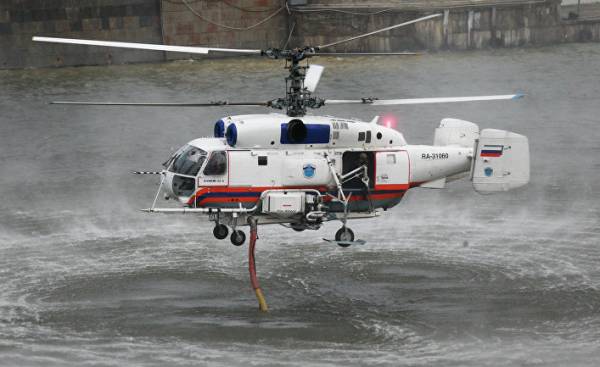 For more than a decade lasts the Saga of helicopters “Kamov”, acquired by the state for fighting forest fires — and this year was no exception: around transport helicopters Russian production re-ignite controversy. In 2015 and 2016, today in working condition is only half the existing fleet of helicopters. A number of experts and workers in this industry (especially fire service) have expressed dissatisfaction about the fact that at issue was the operational capability of fire fighting, meanwhile, the government believes that the current situation “does not impose any restrictions” on the ability of the sector.

The government’s strategy (a number of changed over the years, managers) on the acquisition and management of transport helicopters actually did not bring about any tangible results. Today the news per se, this note we want only to stress the fact that the repair of two aircraft still not completed. In the best case, they will be ready, as we are assured power, “in October or November” (invariably after a period of forest fires). Responsible for state, which came, the two helicopters “Kamov”, was assigned to the National Directorate for civil protection (ANPC), which was previously intended to shift the blame to working with helicopters before the company Heliportugal. As for the third helicopter (crashed in 2012), he had suffered “significant damage” and he is not subject to restoration.

On the eve of a critical period of the fires (the so-called “phase Charly” from 1 July to 30 September), Jaime Soares (Jaime Marta Soares), President of the League of Portuguese firefighters, said that the lack of helicopters “Kamov” “is a real problem.” “The lack of information about when the helicopters available for use, and when not, creates a terrible inconvenience for those on the ground need to determine the strategy,” he says.

The Ministry of internal Affairs (MAI), under whom is ANPC, denies that the reduction of the helicopter fleet will affect the fire power. “It doesn’t impose on operational capabilities of fire services no limits — say of MAI. — Work plan for air assets was developed based on the use of three helicopters “Kamov””, — informs an official source, noting that “the strategy is based on the effectiveness of the initial attacks [carried out by medium and light helicopters]” and “advanced firefighting”, which is carried out when the fire reaches a more impressive scale (in addition to the Kamov helicopters are used “two heavy amphibian”, the fire planes Canadair and “six mid-seaplane”).

Antonio Lauro (António Louro), Vice-President of the local administration Macau (municipality, who regularly suffers from the most destructive in Portugal, forest fires), says that “it is time to make a decision” in relation to two hours of helicopters “Kamov” (so that crashed, he said, “you can understand”). As for the ways that compensated for the missing helicopter, he believes “unequal substitution helicopters light”.

Viegas Domingos (Domingos Xavier Viegas), Professor of the University of Coimbra and a specialist in the field of fire fighting, more restrained in his criticism than the head fire in the League. However, he makes it clear that being in the operating state “four or five helicopters, “Kamov” would be ideal” because this helicopter is “more maneuverable” and “can carry more water than transport aircraft.”

The difference between a helicopter “Kamov” and fire-fighting aircraft Canadair is not so much the volume of cargo (approximately five thousand and six thousand liters, respectively), but in performance. In some situations, the presence of suitable water sources, the helicopter can make a lot more gas stations than aircraft (and therefore pour more water on the flame).

The expert from the University of Coimbra, however, far from absolute confidence in the efficiency of aircraft and helicopters. “In the darkest days no matter how much we resort to air tools is always not enough. When it happens to 400, 550 and even 600 fires a day, to respond to all of this there is no way,” says Xavier Viegas.

The same opinion is shared by another expert in the field of fire fighting Paulo Fernandes (Paulo Fernandes). “Fires in extreme weather conditions spread so quickly that the opportunities to eliminate them, regardless of the means, is very limited,” says Professor of the University of trás-OS-Montes and Alto Douro, in order to give an idea about the disparity of capacities in such situations, gives the following comparison: “the Damping ability of heavy aircraft is only 1/10 or 1/20 of the potential intensity of a fire.”

Domingos Viegas nevertheless believes that Portugal “may require additional air assets,” and implies that a choice must be made in favor of “heavy aircraft such as the Canadair”. However, buying a new vertoletov or aircraft is not included in the government’s plans. “The acquisition of additional aircraft in the near future is not expected”, — reported in the MAI. Judging by the helicopters of “Kamov” this is a good strategy to help avoid new problems.