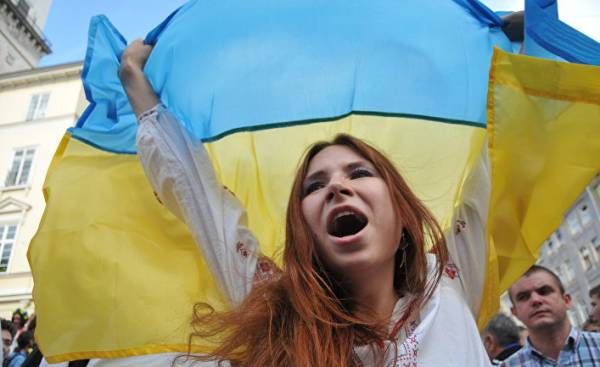 At first glance, over the last three years in the country, much has changed. But the more it changes, the more noticeable how our progress is burdened by the past. What’s wrong?

Independent Ukraine emerged as a result of the fall of communism. But he did it quietly. Unlike the great French revolution in 1789 and Russian in 1917, resulting in large geopolitical changes, the velvet revolution of 1989-1991 not given birth to any new “ISM”.

Communism pushed the old “ISM” — consumerism. Communism had a lot of enemies. But one of them remained the strongest. Speech about life. Everywhere came communism, disappeared bright colors in the streets, noise in cafes and variety of goods in stores. In their place came a dull canteen, the deficit and inconspicuous clothes. Domestic unpleasantness can be tolerated, while there was a revolutionary terror, or revolutionary enthusiasm. But the terror died with Joseph Stalin, and Leonid Brezhnev and any other late Soviet leader it was hard to imagine in budenovka.

“Cronyism” and “get it” — two key concepts that governed the life of every Soviet family. And so to live, even to survive you a long time. As he wrote the classic, the person is ready to adapt to any trouble assuming that others live the same way. All were equal in their poverty, and it was called justice.

However there were exceptions: young people, intellectuals, residents of the Western Borderlands of the USSR, “posovetivala” 20-30 years later. Or they remembered how it once was, or just wanted to dress and behave differently, as seen in French films in Polish journals. This memory and these aspirations are freeze-dried in a mythical West — free non-Communist world where everything is available and nothing is forbidden. This image became more and more desirable and convincing due to the fact that the real West remained inaccessible. According to the memoirs of leaders of the miners ‘ movement in 1989, even the Donetsk miners dream was to live in the West, getting paid in America, and social protection — as in Sweden.

Independent Ukraine has emerged as the unlikely Union of the three communities — national (or nationalist) Western Ukraine, Communists repainted in the center and those in Donetsk the protesters. The first independent Ukraine was presented in the colors blue-yellow flag, the second is the ability to save power, and the third is in the form of generous and cheap consumer basket. Hope the latter was not without reason: as predicted in 1990, the Deutsche Bank, of all the Soviet republics Ukrainian SSR in the case of the collapse of the Soviet Union had the best chances of rapid economic development.

But two of the three expectations were not met. Independent Ukraine was neither national nor successful. On the contrary: the first years of independence turned into an economic disaster. Few remember, but in 1994 a special issue of the Economist on Ukraine, with the eloquent title the Birth and possible death of one country.

In the 1990s, the West came to Ukraine. Under the guise of second-hand. A new culture born in the former Soviet Union, became the culture of the new Russians, or — in our interpretation — new Ukrainians: crimson jackets, gold chains and shoes made of ostrich skin. Historian easy to learn this type of culture — the culture of glamour, rich in fashion for those who yesterday was poor. Another innovation was the culture of “gangster of the 1990s” sports clothing and Russian chanson — those who also sought the top, serving the interests of the Nouveau riche.

The turning point became the first years of the reign of Leonid Kuchma. On the one hand, its first government launched economic reforms will be necessary, with another — it was during his first term in Ukraine formed the oligarchic system.

There were, of course, another specific feature of the Ukrainian. Unlike neighbouring countries, the economic collapse of the 1990s did not lead us to authoritarianism. With the exception of the Baltic States, Ukraine only passed the exam on democracy. And most importantly: the Ukrainians have passed it on an empty stomach.

Yes, Ukraine will not become a developed democracy with established traditions, rules and institutions. Our democracy arose rather as democracy by default on the basis of regional and oligarchic competition, when no region, no oligarch has not been able or even tried to govern the country alone. Though imperfect, but a democracy. The democratic features of the Ukrainian political system are easily recognizable: the government has varied depending on the election, and it was difficult to predict who will win once again.

Almost ten years of continuous economic growth from the late 1990s until the crisis of 2008 in combination with democracy by default launched new processes, the effects of which we feel till now. The main of them is the emergence of a new middle class. Predominantly young, educated class, represented by the inhabitants of large cities, where there were more opportunities for doing new, non-oligarchic business. What is also important: this class was formed thanks to the Internet and travel, and the lack of a “single TV” button did not do it, unlike Russia, the authoritarian-dependent.

Two Maidan largely become the revolution of this new middle class. That is characteristic: both occurred in the Wake of economic recovery. This paradox corresponds to the typical behavior of this class, which first appeared during the youth revolution of the 1960‑ies in the West: its representatives are rebelling when things go not for the worse and for the better. Because the protest is associated not so much with interest as with the values of self-expression.

This new middle class — the backbone of a vibrant civil society. The only thing he fails until now, is to evolve into viable political projects. Therefore, the political life in Ukraine in 2000-2010‑x remains the system that emerged under Kuchma, with the leaders who are its “children”: Yushchenko, Yanukovych, Tymoshenko, Poroshenko.

Beyond the Islands, creating a middle and an oligarchic class, remains a big sea of impoverished second-hand-Ukraine. She wants to live in Europe, but longs for the Soviet times, cutting into the ground or go to work abroad and demonstrated the wonders of survival. If the world existed a competition of Nations for survival, the Ukrainians would take the prize. So it was in the past. So, apparently, will remain in the coming years. After all, Ukraine still has not formed the political class, having the will to change the rules of the game.

At first glance, in the country, much has changed, especially over the last three or four years. Three unlikely allies 1991, only one remained: the Western Ukraine. But it has changed a lot, gradually moving to the East, from Kiev and the Dnieper. The biggest economic change was the reformation of the national economy: since the mid-zero part of the service economy in the national gross product exceeded 50% and since then is growing steadily. To a large extent the conflict between the separatist Donbass and the rest of Ukraine can be interpreted as a conflict between an industrial past and post-industrial future of the country.

The more changes in Ukraine, the more noticeable how its development is past. And it’s not a language question or different contending models of historical memory and the vitality of old patterns: widespread corruption, a large informal sector, lack of institutional trust, eroding national body, such as cancer cells.

In the end, not only Ukraine, but all its neighbors are trying to overcome their past. What makes our country attractive: in this struggle, she does not give up and keeps trying.

And just as important: if you recently Ukraine and Europe coped with their crises on their own, the last 10-15 years — it is not. The more Ukraine europaservice, the more Europe ekraniziruetsya. The latter problem — the instability of political and economic structures, refugees, social inequality, populism is more similar to Ukrainian. And the attempt on Putin’s geopolitical postoyannuyu system makes Ukraine and Europe situational allies.

Of course, the key question remains: “will the next European-Ukrainian crisis to a promising outcome?” In other words: will there be a new “ISM” that can replace all the old, including consumerism? No one knows, because the question is not knowledge, but action.

However, in search of an answer it is now impossible to ignore the Ukraine and its experience. If the West and the East of Europe want to survive, they need to take responsibility before each other. It means to rise above the level of consumerism. It was enough to defeat communism, but not enough to build a new world. Yes, now the world is far from perfect and not perfect. But any desire to build an ideal world in the best case lead to failure, in the worst case to the destruction of millions. We need not a perfect world, we need peace a comfortable life, not survival.