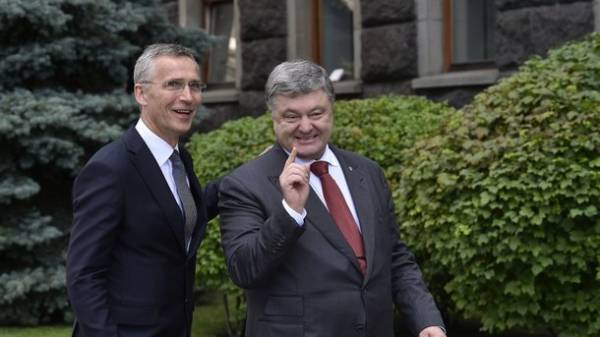 Ukraine and NATO began a discussion about joining the plan of action on membership (pdch) in an Alliance, which we have not provided for the infamous Bucharest summit. The start of the dialogue, Poroshenko said after today’s meeting of the Commission Ukraine-NATO. However, while the Alliance does not predict when Ukraine can provide the coveted membership action plan, not to mention the prospect of membership. In the Alliance look at it cautiously, fearing an open confrontation with Russia, limiting formulation is “our doors are still open”. Today, Petro Poroshenko, in the presence of NATO Secretary General Jens Stoltenberg said that Ukraine is not going to apply for membership. But once again reminded of the recently signed law, which clearly enshrines Ukraine’s course for NATO membership. Its adoption, according to experts, are not consistent with our international partners, therefore, the rate of course NATO is in the capitals of the countries-members of the Alliance, at least, surprise.

NATO will help Ukraine to investigate the massive cyber attack, which on June 27 was injured Ukrainian ministries, banks and public institutions, and to provide equipment for satellite communications. The Alliance continues to support the sovereignty and territorial integrity of Ukraine, will never accept the illegal annexation of Crimea by Russia, and urges Moscow to stop military aggression in the Donbas. But on the prospect it is not. These are the results of today’s visit of NATO Secretary General Jens Stoltenberg and members of the North Atlantic Council to Ukraine, which was timed to the 20th anniversary of the signing of the Charter on a distinctive partnership between Ukraine and NATO at the 1997 Madrid summit.

Speaking from the rostrum of the Verkhovna Rada Jens Stoltenberg reiterated that “NATO does not recognize and will never recognize the illegal annexation of Crimea,” saying that the Alliance is on the side of Ukraine in fighting with Russia in the Donbass, quoting the verse of Taras Shevchenko “Meni odnakovo”, written in may 1847 in Saint-Petersburg:

Opening the two-hour meeting of the Commission Ukraine-NATO in the administration of the President of Petro Poroshenko said that our priority is integration into the North Atlantic space, with the goal of gaining membership in the North Atlantic Treaty organization. “I want to stress again, this does not mean that we will immediately apply for membership. We need to build a reform program, the program of our cooperation, to intensify our efforts to achieve the required standards,” – said Poroshenko.

It is noteworthy that this statement by the Ukrainian President made in the presence of Jens Stoltenberg and all the 29 ambassadors of the North Atlantic Council. The reason, according to sources “Today” in Ukrainian dipkrugah, has become a serious concern in the West regarding the law “On amendments to some laws of Ukraine on foreign policy”, which is one of the national interests of Ukraine determines the membership in NATO.

We all remember how at the end of 2014, the Verkhovna Rada abolished the non-aligned status, which is the regime of Viktor Yanukovych has made to the law on fundamentals of foreign policy, replacing it with “cooperation with NATO to achieve the criteria necessary for acquiring membership.”

“But this step was not done following logical: define a new priority. And it wouldn’t be so important, if not a few “but”. First, this new priority is the membership in NATO – has been performed in the form of statements and declarations, that is de facto present in the agenda, but de jure no supported. Second, the difference was felt in the fact that the Ukrainian government told an internal audience, and external. Ukrainian audience often hear about the promotion to membership. But statements of foreign audience has always been careful and kept the legal framework. And these formal boundaries were determined in order to “achieve the criteria necessary for membership” in NATO, but not membership as such,” said political analyst of the Fund “Democratic initiatives” Maria Zolkina.

If you evaluate the foreign policy factors that directly affect the Ukrainian agenda, voted in 2014 changes in the law on fundamentals of foreign policy, when the non-aligned status was replaced by the phrase “the criteria for NATO membership,” was not without its pitfalls. Despite the annexation of Crimea by Russia and the beginning of military aggression on Donbass in the West and didn’t want to hear about Ukraine’s membership in NATO, fearing a direct confrontation with the Kremlin. Definition of “achievement criteria” consistent with international partners in practice meant the achievement, until 2020, the necessary conditions (adopted a program of reforming Ukraine’s armed forces up to 2020), which will allow you to apply for membership in the Alliance.

However two years later the Verkhovna Rada on behalf of the President again changes the law on fundamentals of foreign policy, and the definition of “achievement criteria” replace with “with the aim of achieving membership of the North Atlantic Treaty organization”. According to the Director of the Institute of world policy Alyona Hetmanczuk, adopted by the Parliament and signed by the President of the law had not been discussed with NATO and our allies is clearly not amused. But, even though it combines with Stoltenberg press conference, Poroshenko reiterated the law, which clearly defines the foreign policy of Ukraine. The NATO Secretary General his opinion is not shared and it’s pretty blurry answered the question about the prospect of Ukraine’s membership in NATO: “Every country has the right to decide whether she wants to be a member of an Alliance like NATO, and it is important to stress that any decision on membership in NATO should be taken by NATO countries and the country that submits the application.”

Stoltenberg went on to talk about the support of Ukraine, saying that in 10 trust funds of the member countries of the Alliance has allocated almost 40 million euros, but Petro Poroshenko unexpectedly announced the start of discussions between Ukraine and NATO’s membership action plan. “We believe it is necessary that we begin a discussion on the introduction of the Membership action plan and our proposals for the beginning of the discussion was gladly accepted. This discussion will bring Ukraine closer to the possibility of the filing of the application. We have a plan for three years, we have a program until 2020”, – said the President.

This is the reaction in Russia. Press Secretary of the President Dmitry Peskov said that granting map to Ukraine would not contribute to the strengthening of security on the European continent due to the approximation of NATO to Russia’s borders. Any movement of Ukraine towards NATO in Moscow perceived negatively. In 2008 the granting map to Ukraine at the infamous Bucharest summit, where Putin, referring to Bush, said that “Ukraine is not even a state”, was blocked by Germany and France in favor of Russia. The official explanation was “Ukraine’s accession to NATO is not supported by the people”. Indeed, according to the poll Fund “Democratic initiatives” name Ilka Kucheriv jointly with the Kyiv international Institute of sociology, only 15% of Ukrainians in 2005, there were “for” the integration into the Alliance, 45% were against. Not fundamentally changed their attitude to NATO in 2008: only 17.5% of Ukrainians supported the idea of NATO membership against were 55.5% of respondents.

The illegal annexation of Crimea and Russian military intervention in Donbas have changed the opinion of Ukrainians about the North Atlantic Alliance. According to a recent poll Fund “Democratic initiatives”, in the case of a referendum, 69% of Ukrainians would support Ukraine’s accession to NATO, with 26% against. With this level of support Ukraine can apply for membership in the Alliance. But first, according to Poroshenko, it is necessary to achieve NATO standards and to hold a nationwide referendum.

However, so-called Study on NATO enlargement of 1995 emphasizes that unresolved conflicts or external territorial disputes can become a barrier to membership in the Alliance. Besides, according to senior researcher at the Institute for Euro-Atlantic cooperation Andreas Umland, it is unlikely we are talking about granting Ukraine a membership action plan in the short term. Yes, and Jens Stoltenberg, answering the question of the head of the Verkhovna Rada Committee on foreign Affairs Hanna hopko on the time frame of obtaining the map, a direct answer has not given, citing the need for reforms and fighting corruption in Ukraine.

Individual countries-members of NATO much afraid of confrontation with Russia over Ukraine, preferring to maintain the status quo. In some capitals openly declare that they will not fight with Russia over Ukraine. Talked about this and former U.S. Ambassador to Ukraine Steven Pifer. “As for our prospects, I’d like to ask the question, what is the prospect for Ukraine (with the understanding that we are in a war and annexed the Crimea) receiving mode map at least? NATO is now helping a lot in a pragmatic key, but have you seen some of the messages professionals who have long accompanied the NATO… Seems Pifer said former U.S. Ambassador in Ukraine in Ukraine, NATO will not fight Russia for Ukraine. For professionals it was clear to me, by the way, from the very beginning that NATO is not at war. But for us it’s kind of a surprise. And how not to fight?”, – said the representative of Ukraine in the security subgroup of the Trilateral contact group Yevhen Marchuk.

Now, according to experts, Ukraine should seek status of the main ally outside NATO. On March 22 the Verkhovna Rada adopted a resolution-appeal to the U.S. Congress with such a request. To date, the status of an ally are 15 member States: Argentina, Australia, Afghanistan, Bahrain, Egypt, Israel, and others. This status will allow you to obtain from the Alliance military assistance, to participate in joint defense initiatives, exercises and also apply for deliveries of anti-tank, anti-aircraft and small arms. As for NATO membership, according to the Director of the National Institute for strategic studies Volodymyr Gorbulin to the post, it’s a long road and each step will require from Ukraine a huge effort. But as they say, the road by walking, after a couple of months ago, even the organization of the meeting Poroshenko with trump until trump’s meeting with Putin seemed an impossible task.