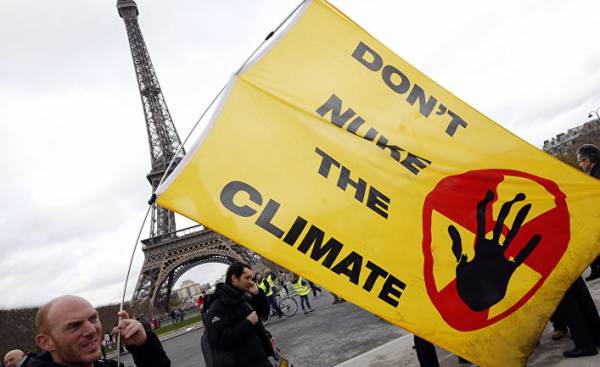 The first of June, the United States withdrew from the Paris agreement on climate. Thus the country under the leadership of President Donald trump has taken another big step to becoming a pariah state.

For the past many years, trump believes in a very strange conspiracy theory. In 2012, he argued that “the concept of global warming is invented by the Chinese and for the Chinese to make U.S. industry uncompetitive.” However, he called not this cause when he announced U.S. withdrawal from the Treaty of Paris. This agreement, in his opinion, unprofitable and completely unfair for America.

Justice, like beauty, is a subjective question, but trump is very difficult to find an excuse. The fact that the Paris agreement is very beneficial for America, and that the United States continue to shoulder an unfair burden on others.

For decades, the U.S. disproportionately contributed to the increase in the concentration of greenhouse gases in the atmosphere. And today, among the largest countries in the world, the U.S. continues to be the main source of carbon dioxide emissions per capita. According for 2013 (these are the most recent complete data published by the world Bank), this level in the U.S. in more than two times higher than in China, and almost 2.5 times higher than Europe. Having a high income, the United States have much more opportunity to adapt to the challenges caused by climate change than poor countries such as India and China, not to mention the African countries with low income levels.

Moreover, the main error in the argument trump is that combating climate change actually strengthens US, not weakens. The sight of the tramp looking to the past as it is ironic, wasn’t great. He promised to restore jobs in the coal industry (now these jobs total 51000, that is, less than 0.04% of the total employment in non-agricultural sectors), while ignoring the difficult working conditions and the health risks inherent in this industry. And that’s not to mention the technological progress that will continue to reduce employment in the coal industry, even if the coal production will start to grow.

In fact, in the business of installing solar panels creates a lot more jobs than disappears in the coal industry. In General, the transition to a green economy as income increases the US today and the pace of economic growth in the future. In this, as in many other issues, trump is hopelessly mired in the past.

Just a few weeks before the announcement of trump about his decision to withdraw from the Treaty of Paris, a global high-level Commission on the issues of carbon prices, in which I co-chaired together with Nicholas stern, highlighted the huge potential of a transition to a green economy. In the Commission’s report, published in late may, it is proved that the reduction of CO2 emissions in reality are able to strengthen the economy.

The logic is very simple. The main problem, which today prevents the growth of the global economy is insufficient aggregate demand. Meanwhile, the governments of many countries suffer from a lack of income. We can solve these two problems simultaneously, and at the same time reduce greenhouse gas emissions, if we introduce a fee (tax) on CO2 emissions.

It is always better to tax something bad than something good. Enter the tax on CO2 will be for firms and households an incentive to rebuild in accordance with the requirements of the world of the future. Such a tax would encourage companies to innovate, which will reduce energy consumption and reduce emissions. Because of this, they will have a dynamic competitive advantage.

The Board reviewed the level of carbon prices required to achieve the goals set in the Paris climate agreement. This level is much higher than what is observed today in most countries of Europe, but it is acceptable. Members of the Commission stressed that in different countries the price may be different. In particular, they noted that improving the system of regulation (for example, restriction of work and the construction of coal plants) allows to reduce the tax burden.

Interestingly, in the economy of Sweden with its almost
the world’s best performance has implemented a carbon tax set at a much higher level than is offered in our report. The Swedes managed to maintain a high growth rate of the economy, while avoiding greenhouse gas emissions in the U.S. scale.

When trump America has evolved from a world leader into an object of ridicule. Immediately after the US withdrawal from the Treaty of Paris at the city Council of Rome was hung a huge banner: “planet first”. And the new President of France Emmanuel macron ridiculed the main slogan of the election campaign trump, proclaiming: “let’s Make our planet great again”.

However, the consequences of actions trump is not funny. If the United States will maintain emissions at the current level, they will continue to inflict great damage on the rest of the world, including much poorer countries. Those who are American recklessness harms, justifiably angry.

Fortunately, many regions of the United States, including the economically most dynamic, demonstrate that actions trump although it is not entirely insignificant, but at least less significant than he would like to think. Many States and corporations have announced that they will fulfill their climate commitments, and perhaps even prepared to go further, thus compensating for failures in other regions of the United States.

The world needs to defend itself against rogue States. Climate change is for the planet as an existential threat that is no less terrible than the threat posed by the nuclear ambitions of North Korea. In both cases, the world can not avoid the inevitable question of what to do with countries that refuse to comply with their duties of saving the Earth.