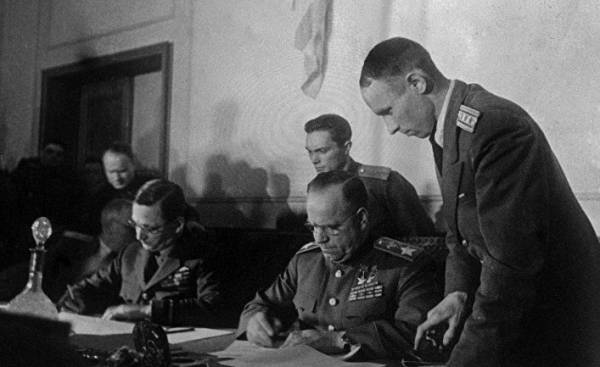 The contemporary Interpretations (Jörg Morré) is forced to apologize. In fact, at first he was just going to read out a welcome speech during the opening of the exhibition on the day of the 76th anniversary of the German attack on the Soviet Union. From ambassadors of Ukraine, Russia and Belarus. But no one passed. Now Morrissey standing in front of two rows of iron chairs, on which sit old women who survived the Second world war. They look at Morra with anticipation. He improvises, invites one of the women on the podium, offering to tell her about what happened June 22, 1941, in Ivanovo. The woman says that was little, and she remembered the noise during a football match. And then from the speakers came a voice, marking the beginning of the war. This story saved the entire evening.

What happened, Mr. Morra? “Politics,” he explains briefly. 53-year-old Morra is a Director in the German-Russian Museum in the Berlin district of Karlshorst, reminiscent of the Second world war. For a long time, he personified the friendship, not only between Russia and Germany in the scientific Council of the Museum there are also representatives of Ukraine and Belarus. But in recent years the Museum became the center of international conflict.

It was felt already in the past: so, the anniversary of the end of the war may 8 tradition, when the ambassadors of US, Russia, France and the UK, as well as Ukraine and Belarus met in Sochi to commemorate the victims and to make a toast to peace on Earth. In the place where in 1945 signed the Act of unconditional surrender of Germany. But in the spring of 2014 there was the annexation of Crimea by Russia, and since Ukraine’s Ambassador no longer appears in Karlshorst. Followed this tradition is also refused, the U.S. and the UK. They aim to isolate Russia — in large matters and in small things. But Morrissey wants to continue the dialogue. It comes at a price: “As a historian, I sometimes have to bend”.

In different countries in the former Soviet Union has its own view of the past. In total in the USSR from 1941 to 1945 killed 27 million people. However, the key element of the memories of the war is not the tragedy of the war itself, and the triumph of victory, 1945. May 9 is called in the former Soviet republics the Victory Day. In Moscow on this day held a Grand military parade — “Parade of Victory”, which is based on the Patriotic feelings of the Russian population, but which aims to demonstrate to the world the military power of Russia. The glory and honor of the Soviet Union — this narrative exists today.

According to Morra, the big problem is that access to Russian historical archives remain largely closed. This creates a fertile ground for all kinds of speculation. “Whoever owns the deed owns the power.” In this case, the Russian authorities — and they use this power more than ever before, in a favorable light for yourself to imagine your own story. As Russian President Vladimir Putin at the end of 2014, it is impossible to rewrite history again. However, when it look at the history of the country has changed dramatically: many moments now in silence, primping and interpreted in new ways, to affect the consciousness of Russians. In the fall of 2015 near the red square was opened financed from the state budget exhibition, in which the whole huge room was dedicated to one only Stalin and the achievements of the USSR in the 1930-ies. Soviet citizens were characterized as “purposeful people”. With regard to such themes as terror and the Gulag, their organizers almost ignored.

All are more careful

Putin himself has always mitigated the horrors of the reign of Stalin: “Who knows, we won the war, if the then government were not so cruel.” The meaning of his words is clear: only a strong leader can lead his country to victory. Now in the role of a leader Putin sees himself. The story he ignores only when it is beneficial for his personal interests. So, he criticized the decision of the Soviet authorities to transfer Crimea to Ukraine, adopted in 1991. And the annexation of the Peninsula he argued that the Crimea was originally Russia.

The same people who oppose the state interpretation of history, you need to be ready for the accusations of extremism. Against this background, a significant achievement is the fact that Morrissey and his colleagues from Russia, Belarus and Ukraine are still at the same table. All steel to be careful — Morra feels it. But despite the political conflicts, the participants in this “club” are United in the fact that the German-Russian Museum needs to continue its work and further. Joint exhibitions in the near future is not planned — too different now concept parties. Morra regularly travels to Russia to participate in various exhibitions and meetings with representatives of partner museums. Recently, one of his Russian colleagues proudly introduced a new “teaching” room in his Museum, where children and youths can now play the game World of Tanks. “It was just some gaming hell” — but aloud Morra this, of course, did not say.

Now in the Museum’s cooperation is mutual exchange of special exhibitions. Thus the Russians have the opportunity to meet with the “German view” of history — and Vice versa. In Karlshorst on the anniversary of the attack on the USSR opened the exhibition “Children in war”, which Morrissey has at its disposal from the Central Museum of the great Patriotic war in Moscow. Several booths depicted the suffering of Soviet children during the war years, stories about boys and girls, dying of hunger during the siege of Leningrad.

But there are also many stories like the 13-year-old Wani Andrianov, helped the soldiers of the red army to fight against the soldiers of the Wehrmacht in the Soviet rear. The history of the young heroes. Young sailors who followed the “call of the heart”. “Imbued with romanticism”. Morra asks the visitors during the opening of the exhibition to distract from the “German look” and feel the pride of the former Soviet republics for the victory of their country in the war. But one of the older visitors to this appeal, apparently, was not to the soul: examining the few booths, he said something that Morrissey would never allow himself to say: “Propaganda”.