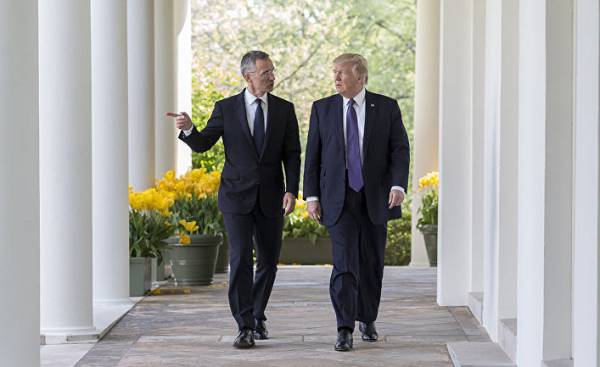 There is no doubt that Thursday night, when the heads of state and government of NATO will formally accept into its ranks Montenegro as the 29th member in the audience will not hear the sigh of relief at the end of this, as expected, a decisive summit. We are talking about the first meeting of President Donald trump with the allies to discuss the priorities and direction of the Alliance. European capitals and NATO partners are closely watching the message of the American administration: although we all still live in the memory of trump statements about the “obsolescence” of the Alliance, all waiting for confirmation of United States ‘ commitment to the principle of collective security under article 5 of the Washington Treaty.

How everything will actually? Analysis of American foreign policy in recent months indicates that the US is clearly not leaving NATO. The appointment of James Mattis (James Mattis) the Secretary of state and Herbert McMaster (Herbert McMaster) the national security adviser, the performance of the Vice-President of Pensions at the conference on security in Munich in February this year, the April conversation of the American leader with the NATO Secretary General Jens Stoltenberg (Jens Stoltenberg) — all this confirms the fortress of transatlantic relations, which have been the cornerstone of U.S. security for the last 60 years. A rapprochement with Russia in fact did not happen. Moreover, the us military is actively involved in the deterrence forces, which were deployed in Eastern Europe summit in Warsaw in July 2016.

In any event, the European allies should not take the summit in Brussels as a carte Blanche. Whatever trump’s words, his statements would not be fundamentally different from the rhetoric of previous administrations (unless volubility). And the message is clear: the allies have more and better to spend money on defence, because otherwise the US will be forced to reconsider their commitments. These words sound like distant echoes of the farewell speech of Secretary of defense Robert Gates (Robert Gates) in June 2011, he said how difficult it is for any American administration to continue to support NATO, if the impression is that American taxpayers have spent more than all the rest.

Although the simple analysis of figures and statistics enough to restrain these claims, the prevailing perception it still does not change. 28 allied countries in total allocated to the defense of more than 900 billion euros, while the US accounts for more than 70% of the total budget of 664 billion euros. The European allies collectively spend 240 billion euros, slightly ahead of China (233 billion) and four times more Russian costs (69,2 billion). Impressive numbers. Though not fully reflect the realities of the defense and not necessarily form a specific opportunity. In other words, it says little about people, equipment and technology available to countries and can be used by them in the course of operations.

Anyway, in this area, the Alliance is still moving forward. The campaign in Libya in 2011 has shed light on the gaps in the Arsenal of the member countries, the availability of which, moreover, could provide only the United States (strategic transport, intelligence, refueling in the air…). All this was accompanied by a serious reflection on the load distribution, which led to the formation of measures to increase cooperation in the effort to use the past experience (in particular, it relates to a decade of joint work in Afghanistan under the International security assistance force). In the spirit of this country have committed themselves to work more and more actively cooperate with the European Union: the decision was made in Warsaw with the signing of the joint statement.

In addition, at the summit in Wales in September 2014, the two countries signed an agreement to increase defence budgets to 2% of GDP by 2024. At the moment, with this challenge only four States. France reached the level of 1.8%, however, wants to accelerate the pace to reach goal by the end of the mandate of Emmanuel Macron. Some have expressed doubts about the validity of this indicator, which only indirectly reflects in the framework of the Alliance financial commitments. Nevertheless, this measure serves as a benchmark, on the basis of which to optimize the training and to better plan for the future.

The budget requirements will be added and a desire to involve the Alliance in the fight against terrorism and in particular against the “Islamic state” (banned in Russia as a terrorist organization — approx.ed.). With regard to this last point, the majority of member countries are already involved in the US-led coalition, NATO promised in Warsaw to provide it at the disposal of the AWACS aircraft and in Iraq is training the local military. That is, a radical change in this matter, to count, perhaps not. In the field of counter-terrorism Alliance is likely to continue to act in key policies and programmes of formation stability. This initiative was based on requests of the countries-NATO partners to strengthen their security and defense capabilities. The goal is to prevent future crises through support to local forces, experience and skills of NATO in a number of areas (in Iraq, for example, for demining improvised explosive devices).

Thus, the summit in Brussels in the first place is intended to explain the leadership and public opinion countries, why NATO need to be considered, why is she still useful. The question of defence spending is just one manifestation of the tension that exists in the Alliance after the disappearance of its main enemy in 1991. At stake is the unity of the organization, some of whose members look to the East, whereas others are much more concerned about the South. High time to re-read the Washington Treaty and to remind ourselves of his principles. The issue of collective security is much broader than the question of the common enemy or the threat we are talking about the defense of Europe and North America and their populations. Whatever the threat, the allies can win only if we remain United.