Monument to Shchors, which is called the most beautiful horse monument in Ukraine, not yet demolished, but it’ll do it. Now the Colonel is hidden under banners. The monument was erected in 1954, his sculptors Mikhail Lysenko and Vasyl Boroday. Michael G. is the author of Kyiv monument to prominent Ukrainian composer Mykola Lysenko and Kiev the monument to Alexander Pushkin. Vasily Zaharovich — the Creator of the memorial complex “Ukrainian state Museum of the history of the second world war”, a monument to Lesia Ukrainka, Shevchenko bust in the United States.

According to the rumors, confirm that many sculptors of the time, the model for the monument served as the first President of independent Ukraine Leonid Kravchuk.

The prosecution Shchors: “Blavatsky viscovi Dec. Participant of boyovich di s Army UNR the CAA Saginaw from battle s ostannyoho from R. 1919”. But, as we said, the famous Kyiv collector and historian Victor Kirkevich: “Lord, Yes he is. It’s the same story. Then all fought each for his own case.” Monument included in the State register of immovable monuments of Ukraine by category of national importance as a monument of monumental art. Nevertheless, its going to carry. Not demolished, but intend to. The photo — installation. Create. A monument in the birth process. Divisional commander. Shchors was only 24 years old — still a kid.

IT WAS TEMPERED STEEL

The famous writer, the author of the novel “How the steel was tempered” dekommunizirovali for the following reason: “Chest. Brave the fate of the battle s Army UNR that Carolina operations against civilnog of the population”. That’s just my mistake: according to the distinguished kyyevoznavets Mikhail Kalnitsky, “the current idea of Ostrovsky as “the writer-soldier” and “the writer-security officer” — the myth of Soviet production.” During his supposedly bloody atrocities, the writer actually passed the lunch in the station buffet, sawed wood and studied at the fireman. In Kiev, there were two monument to the writer Maxim Gorky. Demolished both. One to his place saw the construction of high-rise buildings, the second — in the framework of de-communization. Really — who is this Peshkov (the real name of the writer)? And it does not matter what it is — a great writer, which was 5 times nominated for the Nobel prize for literature. We Nobel… more important To us that Gorky Stalin loved. And if loved — so, automatically, you have to carry. Let me remind the writer repeatedly visited our city. In 1914, he lived for months in the house №6 along the street Lutheran. All “murdered”. For the sake of construction. Not a masterpiece. But was demolished in vain.

Zoe Kosmodemyanskaya fought with those who came to her land with the Germans. For which he was hanged. The fact that the monument to 18-year-old girl in this European Kiev, tagged, piled up on the ground and kicked him is a disgrace and barbaric. Despite this, the monument in place will not return: in the best case it will be brought to the Museum of communism. Unless, of course, that one day will create.

THE UN AND MEMBER OF THE POLITBURO

Dmitry Manuilsky blame was put as follows: “Poltera Member of the CC CP(b)U (although we have for this half of the political elite can be judged), the patron’s head For Menstru URSR. The enemy samostiynist of Ukraine”.

And isn’t that in April 1945, Manuilsky, headed the delegation of the USSR at the international conference in San Francisco, which issued the creation of the United Nations, and in 1946 at the Paris peace conference. Politician. Issued the creation of the UN. The monument to Lenin was opened on 5 December 1946, the day of the 10th anniversary of the Stalin Constitution. Before the statue fell in Kiev, she visited the world exhibition in 1939 in new York, where he exhibited in the Soviet pavilion. After the monument was smashed with sledgehammers, his petty sold off in pieces at auction: “an arm — 750 UAH, a piece of the foot — 500 UAH”.

One of the creators of the monument was the prominent architect Alexander Vlasov (co-author of modern building downtown). The second architect Viktor Elizarov — Director of the project “Zhulhany Airport” and the National Museum of great Patriotic war history.

In fact, of all the monuments to Lenin in Kiev (and there were more than 30, mostly “hidden” on the territories of former factories) he was the only one of historical value and is a work of art. Only Lenin. Of value. In New York City. On the exhibition. Was. The monument is not guarded.

Official name — the monument to the great October socialist revolution, became the first demolished. It happened in 1991. What’s interesting: those who oversaw the demolition of the monument, was one of the founders of a remarkable sculptor Valentin Znoba. And took this Valentin to prevent the tragedy. “When in 1991, the Americans learned that the statue of Lenin torn down, they offered him a million dollars, — told the “Today” sculptor and son of Valentine Nicholas snob. — Because they considered the monument a work of art. But our government proudly refused the money. In the end, the father himself undertook the dismantling of the multi-ton Lenin, because our craftsmen are going to Bang it up with dynamite! And anything under the monument metro. Father, when I found out about it, just grabbed his head”. Monument. Was placed in the center of Kiev in 1977. Dismantling. Was supervised by the author of the monument.

The sculpture “Cobblestone — weapon of the proletariat” was a copy of the work of the sculptor Ivan Shadr, which he created from plaster in 1927. That’s funny, the first “Rock” was not included in the list of objects that were to be demolished because of the de-communization. But it was later decided to dismantle it. And before that, its on the rear facade is neatly enclosed with a brick wall — so as not to embarrass his fifth point of playing near children…

The demolition greatly angered the Ukrainian artist Alexandra Roberta: “where is it written that this is a Communist? The sculpture is created in explanation of the revolutionary events of 1905. The people of the former Russian Empire, including Ukrainians, revolted against the autocracy, the lack of civil liberties, poverty, exploitation, and, sorry as we are now told, the oligarchs. Something wrong? For the fact that the Russian sculptor? Then we have to deal with the monument to Prince Vladimir — the authors also Russian. And along with the monument to Bogdan Khmelnitsky — it in Saint Petersburg sculpted. It is taken down?” “Cobblestone”. And the wall behind.

Last summer, in the Ukrainian house on European square, tried to dismantle the bas-reliefs (in this case they had neither sickle nor stars), authored by the artist Valentin Borisenko. The dismantling took place: the bas-reliefs just broke, otkovyryat them whole pieces. The Director of the house of Yuri Stelmashchuk said that “personally oversees the dismantling process and is responsible for everything that happens” and it takes place “in the framework of de-communization.” That’s just in the list of objects that fall under the act, these reliefs are not included.

“My father was a bas co-authored with my husband, — with bitterness says the artist Natalia Borisenko, the daughter of the author of the sculpture. I don’t see in these bas-reliefs some terrible characters, typical of socialist realism. I think that if there really is a solution and it is “disgraceful”, “wrong” bas — well, shoot. But be tolerant. And so — to take, to chop into pieces… of Course, it’s easier just to come here and destroy.”

Now, the bas — banners, painted the color of the Ukrainian flag. Valentin Borisenko. At work on a bas-relief. Ukrainian house. The bas-relief of decommunization was not subject. 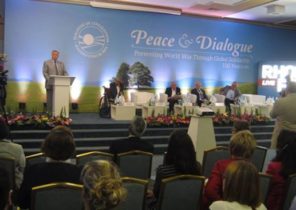