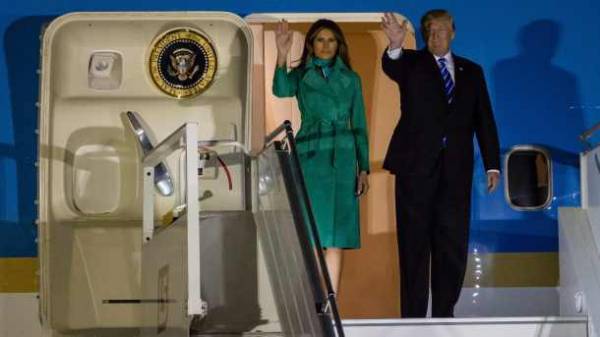 The President of the United States Donald trump arrived in Poland on the eve of the summit of “Big twenty”, however, the poles had to work hard to ensure every whim of the American leader, according to TSN.

It is reported that a month before the visit trump in Warsaw is already full “bossed” us intelligence agents, so as to prepare everything for his arrival. For example, what is its route: the convoy is designed so that the colon at any point of its motion was not more than 10 minutes from the hospital, where, if necessary, the American leader will save lives.

“We interfere with it, because it blocked the street and we have fewer people. We are waiting for trump to open the street,” say the inhabitants of Warsaw.

It is known that trump is a lover of expensive apartments, so in Poland it is situated in one of the most expensive hotels in the chain which has long been fenced and carefully checked. It is noteworthy that on this day none of the staff will come to work if he has some sort of criminal past.

In addition, the American President will occupy the whole floor, it offers replaced the conventional window in the armor, and dismantled all the electronic devices on their own.

That special pride of the poles – the first public appearance of the tramp in Europe will be somewhere in Rome or Brussels, and on the square Krasinskich. Here already get on the stage and set hundreds of meters mazes of fences.

“I’m here on vacation, but I wonder what he will say tomorrow. Maybe he’ll say something about NATO. He is really important person in the world and has the power,” says a tourist from Sweden, Eva Sunberg.

Trump in the Polish capital are waiting for much warmer reception than at the G20 summit where the us President will depart after a visit to Warsaw. The Polish government shares the skepticism and hostility of the trump to accept the refugees and expects assurances that us troops will be deployed in the country, there is a threat from Russia. For trump is the ability to show that, despite disputes with Paris and Berlin, here in this part of Europe, has full support.