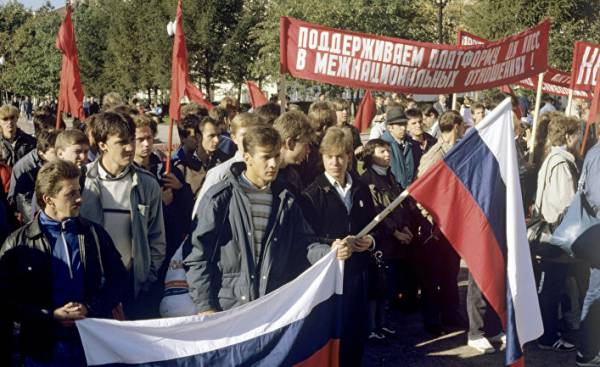 Well, someone will say, how could it not? To what is the way Russian policy is not their language? Is the language of our leadership is not a political language? Or, reformulate the question. Suppose in fact that the Russian government and close to them sinarmas do not have their own political language, because it is impossible to call the language policy of threats with a wink, pulled some and agree a wink to the others. But there is also opposition. And not only external, like Yavlinsky, Kasyanov and Navalny. There are also internal opposition.

For example, the famous “kudrinskoe wing”, so this is all left over from the Yeltsin era. Surely he doesn’t have your language? Of course, there will tell us. It is the language of young technocrats, who, of course, understand everything, but act in the given circumstances, so do not climb into politics. They consider the economic risks, I think, how to conduct a financial transaction, and sheep were fed and the wolves are safe. Trying a last effort to conduct a dialogue with the West. Quite successfully used by the Soviet experience. Where subtexts, where propaganda is kept within the concept of “vertical of power” and “managed democracy” the whole country. And yet there is this feeling, this intuition that all the current political rhetoric is just, as they say, about anything.

What is bad about the old Russian political language — the one in course now, today?

We’ll tell you what. First, let’s admit to ourselves once and for all. The language in which they say one thing and think another, we’ve had it crumbled the Soviet Union. All these slogans under the guise of deeply rooted social truths about the “friendship of peoples”, of “free labor”, the “deliverance from the oppression of private property,” about “melodic and graceful music”, “simple Soviet man”, free from envy and lust, all without the balance found to be ineffective. Although several million citizens can continue to convince themselves and others that believe in these principles, they lie and know they lie. A lie is a state of consciousness of the Soviet people. This norm of his life. It’s the tar that were thrown in Russian political language is small, large portions, and finally, filled in a barrel of honey of Russian Proverbs. It is on this old Soviet language muddy gang of criminals gathered in the Borderlands between the Russian Federation and the Republic of Ukraine, called “people’s republics” and elected, though largely similar to the current Russian, Ukrainian leadership on this Soviet language of lies called “fascist junta”. The Soviet language is a moss, not giving the grass to grow. But how to uproot it, if he so deeply inward?

Well, tell us, we know this herb. It is not only the old Soviet language is to blame. And your democratic volapük? Isn’t the democratic Gennady Burbulis at the dawn misty Yeltsin in the early 1990-ies invented the “vertical of power”? Isn’t democracy first call led us Ceftriaxone and the late hydrocorisone taught us, poor thing, the language of Western hypocrisy, the language of embezzlement under the guise of investment? Who instilled in us the culture of offshore companies and mortgage auctions, plundering of mineral resources and accelerated construction of the caricatures of absolute monarchy under the propaganda cries about Russia “rising from its knees”, about the “homecoming” of the former parts of the Empire and the scoop? Do not liberals first call came up with the nickname “red-brown”, seated in the same cradle of the Communists and nationalists? And now, boil a new language, a hatred of all things natural to the language of hurt feelings. Just not for your opinion, and we have “quilted jackets”, and the values we “Colorado”, and the term “Orthodoxy of the brain” and does reckon us veggies. How can you call this political hate speech to those who for four generations deprived of the opportunity to think freely, who mocks, on the one hand, the machine official lies, and the other — a machine for the production battle. Let their political characteristics, and even true, but why are they so rude?

“Why are you hurting me?” continues to inquire of his critics-robbed the people by the name Bashmachkin. Is political language?

Maybe somewhere he still preserved, a normal Russian political language? And if not preserved, what material is it work? What test can I do? And not whether first to invent “national idea”, and then under it to adjust “language”?

What to say to that? Alas, the last twenty years has been the experience over the national idea under the old language. Yes, Yes, Yes, old bottles wanted to pour new wine. What are the intermediate results of getting up under the banner of this idea, the return of sovereign dignity? The feud with yesterday’s brothers and allies? Violation of sacred treaties and oaths? Support for separatism in impolite neighbors? The capture of territories which would not be recognized exactly the same as in 1940-1980-ies not recognized the annexation by the Soviet Union of the Baltic States (then called the “Soviet Baltic Republics”)? The cultivation in the territory of the state a major illegal armed groups with whom the government is trying to cope, sending them to the middle East or in the Donbass? The first thing that would have made the media modern political language, I would cancel all this nonsense like a bad dream, like a dumb nightmare.

But that first there is free speech, and only after it issued a more strict political reality, written not only in far away and alien to us in the gospel of John. Heinrich von Kleist, who lived in 1700 years after the first of the Gospels, wrote a remarkable treatise “On how to gradually compile a thought, when you say”. In this Kleist is very subtly showed that the idea of the overthrow of the monarchy arose after Mirabeau on 23 June 1789 — suddenly, spontaneously uttered the words that marked the beginning of the transfer of power from the king to the elected representatives of the people. It is then possible to say that the idea, they say, soared in air. But to catch these ideas, they should be fearless to catch the word, may be, without much eloquence.

Here is how it writes Kleist (translated Solomon APTA):

“An interesting example of how the idea gradually formed of an involuntary start, and gives La Fontaine in his fable “the Animals sick of the plague”, where Fox is forced to give a speech in defense of the Leo, though, and doesn’t know where to draw the necessary information. This famous fable. In the animal Kingdom, the plague rages, the lion gathers his retainers and announces to them that one must sacrifice in order to propitiate Heaven. Among the beasts a lot of sinners, death is the greatest of them must save the other from death. Let them confess him with their iniquities. He, for his part, recognizes that hunger killed sheep; and dogs if they approached him too close; and other tasty moments he ever EDATE and shepherds. If no one is guilty of great weakness, he was ready to die.

— Your Majesty, — said the Fox, you are too generous. Your noble impulse gets you too far. What does it matter to lift up a sheep? Or a dog, this miserable beast? But as for shepherd, she continues, because this is important — you might say – although she doesn’t know that he deserves all the troubles,” – said at random; now it is you can’t go backwards; “being” – a bad phrase, but it gives her the time; “…one of this nation… And only then it is a thought that helps her: — “… who fancies himself ruler over animals.” And now she proves that donkey, as the most bloodthirsty (eating grass) is the most suitable victim, and then all pounce on the ass, and tear it apart…

To say so is indeed to think aloud. A series of ideas and symbols followed by side-by-side, and the movements of the mind, we need both, I agree. The language here is not chilling a hindrance, not a kind of brake on the wheel of the mind, as it were, a second, parallel rotary wheel on the same axis. It is quite another thing if the mind already prior to the beginning of the speech dealt with the idea. Because then he could only Express it, but this activity is not only able to initiate, but even weaken his anxiety. Therefore, if any of the ideas expressed are inconsistent, then it still does not follow that she was deliberately inconsistent, to the contrary, the most inconsistent ideas are expressed the most clearly thought out.

In a society where, thanks to a lively conversation is a continuous fertilization of minds and ideas, often see people who, feeling his inability to speak, usually kept in the side, like these people suddenly shudder, flare up, try to say something and say something unintelligible. Moreover, by bringing attention on herself, they seemed to be embarrassed to show gestures that they themselves already do not really know what I wanted to say. It is highly likely that these people have thought about some true thought, and, moreover, very clearly. But a sudden change classes, the transition from reflection to expression killed all the agitation of their mind, is needed in order to keep it a thought, and needs to to Express. In such cases, we need to be able to speak as soon as possible one after another to Express their simultaneously arising thoughts, to pass which at the same time, we can not”.

Language that would Lofotensky animals in the cage of a lion, and not to bully poor donkey would be political. But someone has to love for the sake of free speech and lively conversation and loving the familiar, easy-falsehood — strengthened mutual responsibility. And while the idea of universal deceit is not a cause of exclusion, political language can not appear.