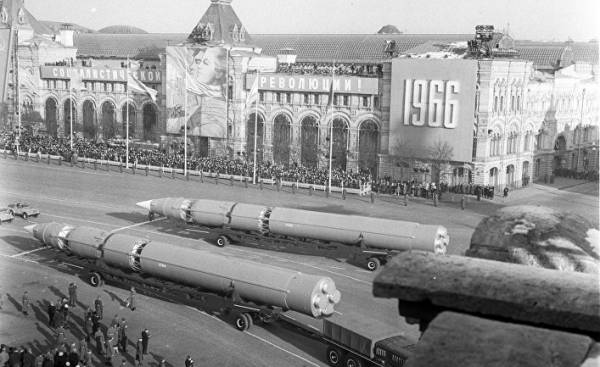 After the Second world war, America became the strongest power on the planet. And it wasn’t just that it accounted for half of global production of products, but also in the fact that it was the only nation possessing the most destructive weapons ever created by humans. First, U.S. officials believed that America’s monopoly on nuclear weapons will last quite a long time. After the war, General Leslie groves (Leslie Groves), the brilliant leader of the Manhattan project, was convinced that the Soviet Union will be able to test its first atomic bomb, not earlier than two decades.

Therefore, the United States was shocked when, on 29 August 1949 the Soviet Union became a member of the nuclear club. No matter how shocking was this news, it very soon faded before the prospect that Moscow may acquire thermonuclear weapons and means capable of delivering to the territory of the United States.

All the possible consequences of this was clearly demonstrated on March 1, 1954, when the U.S. conducted the first test of a hydrogen bomb. Scientists made a mistake when calculating the charge power, received the name “castle Bravo”, with the result that the power of the explosion 2.5 times higher than estimated. The extent of radioactive contamination greatly exceeded the expectations of scientists that they themselves almost died. As a result of these trials, the contamination affected the residents of nearby Islands and a team of Japanese fishing vessel Lucky Dragon, which was in the area at the time of testing. All team members were sick, and one of them died shortly after returning to Japan.

After testing, the advisers of President Dwight Eisenhower’s science laid the scheme area of radioactive contamination from the explosion of “castle Bravo” to the card, making Washington the zero mark. The results were shocking. Recalls Annie Jacobsen (Annie Jacobsen) in his fantastic book on the history of the Agency defense advanced research developments:

“If the zero point was Washington, D.C…. all residents of the greater Washington D.C. and Baltimore would be dead. In the absence of the protective bunkers all the area’s population would have died under the influence of radiation in the five thousand x-rays in just a few minutes. Even in Philadelphia, which is located 240 kilometers, most of the residents would be subjected to radiological examination of such power which would kill them within the hour. In new York, which is 360 kilometers, half its inhabitants would have died by nightfall. Throughout to the canadian border people would be subjected to radioactive radiation of 100 chest x-ray and more, and would have experienced the same thing that the experienced fisherman from the vessel Lucky Dragon”.

The prospect that the Soviet Union is able to cause such tremendous harm to America, not only led American officials to the horror, but also demanded a revision of their strategy. In the end, the strategy of America was to use nuclear weapons to neutralize the quantitative advantage of the Soviet Union in Europe. This strategy made a certain sense in that if Moscow could retaliate against American territories or could, but with the use of a limited number of nuclear warheads. But how do you implement such a strategy in the era of thermonuclear weapons capable of destroying entire cities?

One of the solutions was civil defense. The idea was that if the US can limit the damage that the USSR is able to cause, the threat of use of nuclear weapons in Europe could be more persuasive and effective. In the popular mind civil defense has become synonymous with the training of evacuations in American schools. Meanwhile, in reality, the plans were much more complex and elaborate — and no less insane.

In the 1950-ies and 1960-ies, the us government has vacillated between plans that provided for the evacuation of cities, and plans, based on the creation of a special radiation shelters, where urban residents could ride out the attacks of the enemy. The roles and responsibilities of the Federal government, state governments and authorities at the local level is also constantly reviewed. In addition, there are often disputes about how much money you need to spend on this.

In the years of the Eisenhower administration, the Federal government has put a lot of effort in order to justify the plans to create a civil defense system, despite all the doubts of the President in their effectiveness. For example, since 1954 in the US have annually conducted a nationwide exercise called “Operation Alert”, during which were worked out response to nuclear attack of the Soviet Union on American cities. The results of the exercise did not inspire any optimism.

Congress also tried to strengthen the confidence of Americans in their ability to survive a nuclear war. In 1956, he began a series of hearings called by the Committee Holifildom in honor of the Congressman-Democrat Chet Holyfield (Chet Holifield), who was an ardent supporter of the civil defense system. However, these hearings were extremely tedious and did not bring any tangible result. Writes one historian, “holifilda hearings, 1956, lasted six months, during which time they made 211 witnesses whose testimony took 3 145 pages. They became the most extensive in the history of the study on civil defense.”

If the purpose of the hearings was to increase public confidence in the effectiveness of the civil defense system, they can be called a failure. These hearings showed how crazy was all these plans. The most shocking testimony was given by Frederick Peterson (Frederick Peterson), a former Governor of Nebraska, whom Eisenhower appointed Director of the office of civil defense. As written by Annie Jacobson, during the hearing, Peterson “said that the plan of the administration was to dig trenches along the highway for General use, leading outside all the major cities of the country. These trenches were supposed to be about a meter deep and half a meter wide. When the bombs begin to fall on the city, according to Peterson, people are at this moment on the highway, have to leave their vehicles, lie down in the trench and sprinkle yourself on top of the ground”.

Of course, after that one Senator asked how the government intends to provide food and water to those people who would be in these trenches. Peterson acknowledged that, “obviously, these trenches will be created in the event of emergencies,” and people will not be able to rely on the provision of these basic things. In reality, the situation with food is extremely difficult. “I think the best thing we can do in USA is to organize points of free food, said Peterson. — We can’t have canned we can’t have frozen food. We’ll be eating gruel from wheat grown in the fields, corn and the animals that we catch before the radiation will destroy them.” To sum up, Peterson said, “If such a war starts, life will be harsh, extremely simple, brutal, dirty and miserable.” In other words, the living will envy the dead.

However, all these attempts to create a civil defense system was not completely pointless. For example, the need to evacuate the cities was one of the arguments in favor of the construction of the network of Federal highways. Planning of civil defense also forced the government to think about how to ensure the smooth operation of the authorities after such attacks. The result in Washington was built special shelters for the President and other members of the Executive branch, members of Congress, Supreme court, and measures were taken to improve the system of operational management. All these measures were necessary in order to enhance the credibility of the American strategic deterrent, and this eventually led to the fact that plans for civil defense were simply not needed.