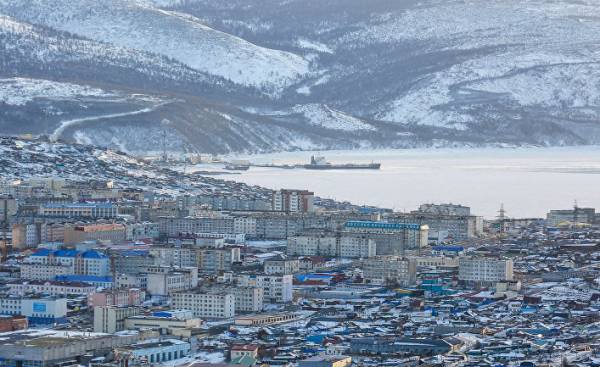 Ust-Nera, Russia — “Runaway of prisoners, when caught, were shot, and to prove it, cut off the ear or hand (brought) and receives some kind of reward. Our is not bad, but you?— Muscovites asked the Director of the regional Museum of Ust-Nera Svetlana bit her in the hall devoted to Stalin’s camps in Yakutia. — But I, for one, say — that was the right thing… the Political is not running, only ran the criminals.”

The village, lost among the swamps and hills, midway between Yakutsk and Magadan, its existence owes to rich gold placers, open here before the Second world war, and the system Indigirka — part of Stalin’s Gulag prisoners mined the gold with bare hands.

Now Ust-Nera from the nearest prison separates the order of thousands of kilometers along the Kolyma Federal highway, paved with the same convicts, but gold remains the mainstay of the economy of the region, who visited the coolest inhabited region of the Northern hemisphere.

Russia now occupies third place in the world for gold production behind China and Australia. Until recently, Russian banks, with the miners buying up all the metal, and actively sends it to export, but the cooling of institutional investors to gold, and the confrontation between Moscow and the West in 2013-2014, significantly reduced the interest in traditional European financial centres to the metal.

Rescued miners, the Central Bank of the Russian Federation, which from the second half of 2014 began to accelerate the purchase of gold in reserves and in 2015-2016 acquired 200 tons, or 85 percent of the annual production of precious metals in the country. CBR first Deputy Chairman Dmitry Tulin said last year that the Central Bank deliberately increases the amount of gold in reserves, so as soon as the reserve asset is fully protected from political and legal risks.

At the same time, Russian companies are less affected by the collapse of world prices, as the almost two-fold depreciation of the ruble, collapsed in late 2014, after global oil prices has dramatically reduced production costs in dollar terms.

The growth of gold production in Russia slowed to 2-3 percent per year 5-9 per cent in the early 2010s, but the company continues to strive to increase production, getting record profits from the combination of a weak ruble and low inflation costs. Especially since in many regions, such as Oymyakon, gold mining is the only base for the economy.

After the closing of Stalin’s camps in Oymyakonsky ulus (district) of Yakutia countless gold mines were merged into the state mining and processing plant Indigirskaja privatized fragments of which are still working to this day.

Mine — a place for seasonal extraction of precious metals from mineral deposits that were formed due to natural destruction of gold-bearing ores. Since the Soviet Union in Oymyakonsky district operates only two mining enterprises are able to operate year-round: built in the 1970s antimony mine between sarylakh included now in private group Company, and launched in 1984, the Badran gold mine, now owned by the former cooperatives of the West.

The first of the modern gold mining company in the district, Taransky mining and processing plant at the Deposit of Dredge, it should work just this year. After the launch of the first phase in may, the owner of the company, the company Highest (GV Gold), there are plans to produce up to 3 tons of gold per year.

Due to the nature of the local ores about one third of this volume concentrate on the thrust, which must be either processed at third party refineries within the country, or ship it to China, told Reuters the Director Turinskoi gold mining company Alexander Tulupov.

Total investment in the construction of the first phase are estimated at $113 million, relying, according to Tulupova to recoup costs within 5-6 years.

According to the Chairman of the Russian Union of gold Sergei kashubians, Russia by 2016, reduced the proportion of alluvial production to about 30 percent versus 83 percent 20 years ago, and in the coming years will keep it around this level.

Amid the exhaustion of easily accessible and rich placers industry is gradually moving towards a much more capital-intensive mining of primary deposits.

Depart from the old traditions is always difficult, but all the neighboring regions, including the Kolyma, it already had, told Reuters chief geologist ore direction Ust-nersky the group of companies amber Elena Andreeva.

“Oymyakonsky district — he was extremely rich in placer gold, she said. — So he too kept a long time without going to the ore”. She is confident that the region has a good chance to discover a large gold Deposit, which have not previously attracted the attention of researchers on the background of the abundance of mineral deposits.

The extraction of gold ore gives larger and more stable compared to mine revenue, and less dependence on weather conditions, said Director of mining the direction of American Appraisal Russia (AAR) – Mikhail Leskov. However, in contrast to seasonal alluvial funded, it requires a large upfront investment several years before the start of production.

Therefore, banks, easy loans current activities of small miners under the guarantee of the sale of the extracted metal, is much less willing to give them as project Finance.

Amber, like other small Russian companies, which are effectively cut off from the stock market and can only rely on their own and credit money, it is difficult to find the money for new ore projects, but he tries to solve the problem by alluvial gold mining.

Little known outside his native land, the conglomerate formally unrelated companies, established in early 2000s, local entrepreneur Alexander of Carp, in 2015 Deposit more than 5 tons of the precious metal. Based on data from industry lobbying, it was ninth in the country after Highland Gold by Roman Abramovich and the Highest (GV Gold) — the company in which shareholders of the Blackrock Fund and the European Bank for reconstruction and development (EBRD).

Rapid production growth helped Amber to Finance large by local standards exploration campaign in 2018, the company plans to start experimental-industrial production of gold ore in the field Hangalas 160 kilometres from Ust-Nera. Given metal in concentrate production up to 1 ton of gold a year, told Reuters in Ust-nersky the headquarters of the group.

Unlike the miners, rossina the production of which is limited to the warm season from may to October, mining enterprises Oymyakon, where the cold pole of the Northern hemisphere, can work at least nine months of the year. From December to late February, when temperatures regularly fall below minus 50 degrees Celsius, outdoor work is still stop — the cold metal of that mining equipment can break down from even small shock loads.

“In the morning it was minus 41,” the young man in a security uniform, who introduced himself as Stas, squinting in the bright March sun and not configured to talk. He guards the base of a successor Indigirskaja, companies Searching for the Gold mine in Nelkan nearly 100 km from Ust-Nera. In March, when severe frosts subsided, and a day in the sun the air quickly warms up to a comfortable minus 25, Alkane, there are people — the miners are preparing for a short flush season.

On the ruins of the road Nelkan-Taryn made visible in black and the inscription “Remember the house”.

“You can live only toilet on the street. And so, even bath there,” he told Reuters a lone passer-by — male of indeterminate age in the boots and with a huge empty bucket. Before modern one-story building of the hostel Search, sign, warning employees about the penalties for the administration of physiological needs outside the designated places.

Only in Yakutia, according to the Finance Ministry, in 2016, it produced 23 tons of gold from the 238 tons of primary production in the whole country. Including Oymyakon last year it produced about 9 tons, including Search — about 2.4 tons, amber — 2.3 tons. A large village with a school, built on Alkane in Soviet times, long abandoned and silent recalls the scenery of the film-catastrophe. On the other Oymyakon Goldfields settlements also long been settled. Moved to Ust-Nera by their former inhabitants with nostalgia the Golden years, when between the district and the mines were regular flights and every day people fly back and forth to work or shopping.

According to the old-timers of the industry in those days Indigirskaja with all the groups together were given up to 20 tons of gold per year, while the placers of the Bodaibo legendary Lenzoloto was cleared of 12-15 tons.

Now in Ust-Nera the planes only fly from the capital of Yakutia, and not every day. If the employee’s salary in the budget sphere of 30 — 40 thousand rubles a month, a one-way ticket costs approximately 15 thousand rubles more expensive than from Moscow to Yakutsk. “That’s crazy. It’s a fortune,” says Mike, the passenger of the flight Yakutsk-Ust-Nera.

Twice cheaper minibus, which passes in winter, a thousand miles in 15-18 hours, and in the summer — almost twice as long.

A resident of neighbouring Oymyakon Susumansky district of Magadan oblast, Mike haltingly talks about his unsuccessful attempt to work for one of the cooperatives, about which the local word of mouth says a lot of bad things.

In flight, he says out loud what kind of stationed in Ust-Nera gold mining companies, you can still get. “I this season need to work. I the house was built on the mainland,” he says.

The issue of moving to the mainland, Europe or the southern part of Russia, one way or another stands in front of each resident of Ust-Nera. If in the Yakut diamond-mining towns of Norilsk polar or forming Corporation ALROSA and Norilsk Nickel Finance resettlement programme “their” pensioners in other regions of the country, Ust-mercy hope mostly to himself. “Of course, want to leave, — said the Manager of the local gold mining company Alexey, answering the question of “Reuters”. — I have children, I don’t want to grow up the way I grew up.” A young man, he is a local resident in the third generation — said the family was in these parts after the expulsion of his grandfather.

Alex laments the shortage of extracurricular activities for children, local young people are drinking too much, recognizing that in the village where there is one sports complex closed several years ago, a pool, doing particularly nothing.

The main architectural attraction in Ust-Nera, besides building regional Museum, built in 1949 as a hotel for visiting dignitaries management Indigirka — Victory memorial on the banks of the Indigirka of the three bronze sculptures and a cannon, very similar to the real.

A sign on the fence warns that “any desecration of the memorial of victory will be equated to extremism and punished administratively, criminally, physically.” Immediately after the memorial starts on the administrative territory of Amber, which sponsored its creation, with stylized border tower with a machine gun “Maxim”. According to standing on her men, the monument is guarded round the year, “for the howitzer is not stolen” and drank beer on the monument, as warmer.