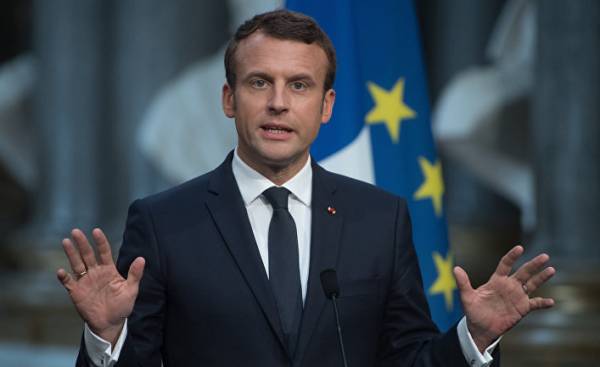 Broadcast last week on France 3 four-hour interview with Oliver Stone (Oliver Stone) with Vladimir Putin reflects the main aspects of the foreign policy of the Russian leader. He is not treacherous villain, as it is described in the West, and advocated a balance of power, as only it can ensure the security in the world.

Documentary stone was unanimously dragged through the mud in the US and even called outrageous several French media. In fact, all those who advocated intervention in Iraq in 2003 and Libya a few years later (American conservatives and the French leftists like Bernard-Henri levy), I just can’t accept the fact that the US and the West in General characteristic of imperialist rhetoric and behavior under the guise of democracy and human rights. Destabilization of States in the name of freedom was always just a manifestation of the us desire for world domination. Putin has regularly said it in interviews and at press conferences: $ 60 billion to the Russian defense against 600 billion on the American…. Russia is becoming a useful enemy to justify such a high expenditure, as the fight against Sunni Islamist terrorism cannot be compared with the cold war of the last century, which gave rise to a mad arms race.

Whatever one thinks about the militant Russophobia, Putin’s international image will be much better. It stands for security, military balance and diplomacy, tends to be pragmatic and not responding (purchased over time, the wisdom) in the Western provocation. The fact that, in countries with a free press unanimously negative attitude is tantamount to propaganda. The situation plays to Putin on hand, because trump was elected President of the United States and has turned into a disaster on an international level. He became a puppet of Saudi Arabia and the UAE and, perhaps, without realizing it, have made possible the current crisis in the Persian Gulf around Qatar. Given his direct and violent accusations against Iran (and here not traced the slightest nuances, although the Iranian people voted in the election and therefore is not completely held hostage by a theocratic regime), whose military budget is much smaller Arabian (Riyadh is in this respect the third place in the world after China and bypassing Russia), it becomes clear that he is not ready to make concessions main ally of Tehran.

Trump has been a disaster, but this is good news for France. The fact is that if Hollande was fascinated by the aura of Obama (he was President of the imperialists against their own will (maybe): events with Snowden, Assange and manning, a large-scale elimination of people with the use of drones…) and I have created opportunities to work with Russia, Makron adhered to Chirac, de Villepin, 2003: “France did not participate in the war in Iraq and did the right thing. She was wrong, when I started a similar war in Libya” (Le Figaro, June 22).

Whatever you think about this “rebellious” followers Médiapart, this aspect of French policy is of paramount importance.

In humanitarian terms, the outcome of the policy of Sarkozy and Hollande was a disaster: the victims of the terrorist attacks in France, the collateral damage of air strikes abroad, drowned in the Mediterranean “migrants”… When Hollande Minister Le Drian has established contacts and signed contracts with those who now pulled the plug on Qatar (primarily Saudi Arabia and Egypt) and demanded to close the TV channel “al Jazeera”, although it plays a huge role for the Arab population of many countries. When the Makron he travels to Moscow to meet with Russian counterpart…. In an interview with Le Figaro, the President said: “I respect Vladimir Putin. We have had him a constructive discussion.” In parallel, he criticized Hollande for which “the overthrow of Bashar al-Assad was a precondition for everything.” In the same conversation, the French leader went through the American and French neo-conservatives, highlighting what consequences the deficiency of realism in international politics: “Democracy is not happening from the outside, without the knowledge of Nations.”

The invitation of trump at the parade of July 14, becomes a kind of trap for trump from the Macron: after a good handshake, the President of the United States is in the background next to a young colleague.

Makron, no doubt, will try to find a balance between trump and Putin, but if the first continue to act irrationally, it will make a choice in favor of reason. Of course, in this case, it will fall criticism directed at chauvinism, homophobia, suppression of press freedom and opposition movements in Russia. The chauvinism trump appears much brighter, but no one attributed it to all Americans. As for homophobia, it is hardly worse than racism in the USA, which started up so deep roots in the community that intermarriage still seems there something unthinkable. In this regard Putin a few times resembles Oliver stone that the term “Russian” does not imply any clear ethnic or religious affiliation. Putin is leading the fight against Islamism and refrain from Islamophobic statements. According to him, in the absence of opportunities to set the country’s full political freedom, he seeks to reduce socio-economic inequality. In the USA, the country of freedom, such attempts are seen.

Such cultural (and ideological) differences of two great countries largely explain their confrontation after the cold war: Americans don’t understand why Russians do not adopt their ideal of freedom. These differences are probably associated with the transmitted family values, emphasis on freedom in one case and equal in the other. This makes the two concepts are irreconcilable, though in France with them all. In the book “the diversity of the world” (La diversité du monde), Emmanuel Todd (Emmanuel Todd) writes: “China and Russia conduct active policy of assimilation, calling the Chinese and Russians conquered the indigenous tribes”. At the same time based on the absolute personal freedom of the Anglo-Saxon world (UK, USA, Canada, Australia, New Zealand) tend to apply “more or less official forms of apartheid.” In the beginning of the century Todd already wrote “After the Empire” (Après l’empire), and now this moment, apparently, is getting closer when trump (Empire paranoid) and the background more inconsistency in foreign policy than Bush. Satiated Saudi contracts of the United States, as the blinded Cyclops, simply can not understand the major global issues of today and tomorrow. Up to the climate: Putin takes into account this issue, and trump waves away from her.

Heavy weapons — again at the forefront