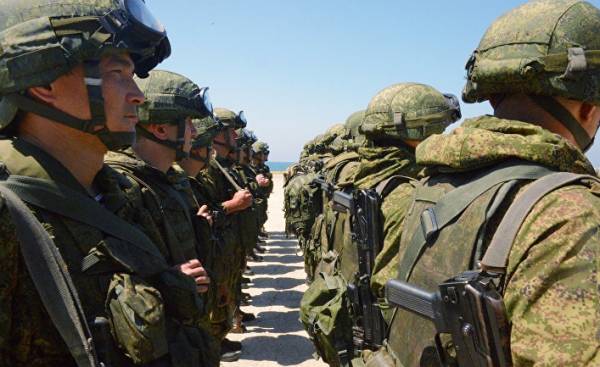 Oil in exchange for weapons, so the sound of the wording, which were to meet the Syrian government and a Russian businessman Yevgeny Prigozhin. Russian Newspapers believe: specifically, the company Prigogine “Euro Polis” is obliged to win for the government of Bashar al-Assad refineries and oil and gas fields and to protect them from attacks by terrorist armed groups ISIS (an organization banned in Russia — approx. transl.).

For this she receives mining rights-quarters of proven reserves there. If military spending will be higher. they will be enrolled separately. The corresponding statement of intent had to be signed in December for a period of five years, reports the St. Petersburg online newspaper “Fontanka” with reference to a source in the Russian Ministry of energy. The Ministry is officially called the agreement a “trade secret” and refused to comment further.

The Syrian Minister of petroleum and mineral resources Ali Ghanem (Ghanem Ali) confirmed in an interview the planned cooperation between the two countries in the oil and gas sector, as well as a meeting with Russian oil firms, “working in Syria.” Names are not mentioned. Kremlin spokesman Dmitry Peskov said he knew nothing about such an agreement. “We have no information on this subject. “The Kremlin also is not following the interests of Russian businessmen abroad, Peskov said.

Also participated in the conquest of Palmyra

The activity of the “Euro Polis” in Syria say a facts firm. created only in 2016, in the beginning of the year substantially increased its initial capital and changed its profile. From ordinary trading firm, trading primarily in food, it became, according to the register of firms, the firm for the extraction of oil, gas and ore mining concession to abroad. In may “Euro Polis” opened a branch in Damascus.

Responsibility for the military component of this transaction was assumed by General Director Oleg Yerokhin. Have a retired officer of the law enforcement agencies of St. Petersburg are in close contact with the head of security Prigogine Evgeny Gulyaev. This security in turn is closely linked to private military company mercenaries “Wagner”. It is named for the pseudonym of a former Lieutenant Colonel Dmitry Utkin of the Russian military intelligence GRU who directs this unit. Members of this unit are trained together with Russian soldiers and special forces, they took part in operations in Crimea, in Eastern Ukraine, and later also in Syria.

Although the mercenaries in Russia, strictly speaking, forbidden, this unit should also participate in the conquest of Palmyra — there are the main sources of oil. Some members of this unit were later awarded in the Kremlin. Accordingly, “Wagner” could take on and the job security of the “Euro Polis”. However, how high profits, while we can only speculate: Ghanem last assessed daily production by 8 thousand barrels of oil and nine million cubic meters of gas. Therefore, due to the limited production volume of “excess profits” while early to speak, said Vladimir Milov, former Deputy energy Minister of Russia. But it’s a matter of perspective: proven oil reserves in the country are estimated at 2.5 billion barrels, gas reserves at 241 billion cubic meters. In 2002, at peak production, daily mined 677 thousand barrels of oil
He Prigozhin, the head of “Euro Polis”, not from the oil business, and earned his first capital in the restaurant business and catering service in St. Petersburg — at a time when Putin was there in the city Department. After numerous public receptions, which he organized, it drew the attention of the media. First, he gave Putin his ship-restaurant “New Island”, later it became the “main supplier” of the Russian armed forces. His “Concord” gets in for many years 90% of all orders for the supply of products for field kitchens. In 2012 he organized a reception on the occasion of Putin’s re-election and is considered one of the Trustees of the Chapter of the Kremlin. Meanwhile, Prigogine your business has long been diversified, began to be active also in the field of real estate and the media. In 2014, it became known that “factory trolley” also financed by Prigogine. This place in Saint-Petersburg hires people to participate in the forums criticizing the West and the liberal opposition in Russia and praise Putin.

Prigogine not only close to the Kremlin oligarch, who has been active in Syria. Billionaire Gennady Timchenko, currently occupying 16 billions of dollars in fourth place in the list of the richest people in Russia and, as Prigogine, came under Western sanctions, has received a very similar scheme rights on two mines for the extraction of phosphate at Palmyra. Before the civil war Syria was one of the largest exporters of phosphorus in the world.

The resumption of production

Given for Timchenko phosphate mines total production once amounted to 3.5 million tons, of which three million tons were exported. In 2015, ISIS conquered the area, phosphate mining ceased.

Only in late may, Islamist terrorists were finally driven from the region. In early June, the company “Stroytransgaz logistics” Timchenko beginning of the restoration, reported the main Department for Geology and natural resources of Syria. And in April, President al-Assad ratified an agreement. At this time in the port of Tartus — there is a Russian military base on the Russian ships were first spotted supply of arms in exchange for phosphate products. The company “Stroytransgaz logistics” did not comment on these reports. “This is one of the many objects on the Damascus-controlled territories, which were handed over to representatives of the Russian, Iranian or Chinese companies, because without their help in technology, investment and export opportunities, it was impossible to restore these objects”, — said Russian political scientist Grigoriy Lukyanov. According to him, currently, this region is controlled by private Russian group of mercenaries who are not only fighting against ISIS, but does not admit to these mines civil militias, supported by Iran.

While Syria tries to restore the network of roads from the depths of the country to the port of Tartous in the direction of Turkey and also protect them militarily. When oil and gas deposits and phosphate mines in Central Syria working again, it is necessary to start the export of these products to give an impetus to the neglected economy.