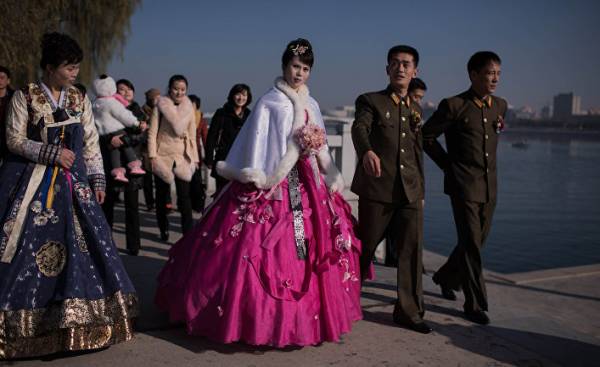 Five years after coming to power, Kim Jong-UN, North Korea is experiencing an upswing in the construction industry. The streets became more lively, and people no longer go hungry, according to experts on North Korea. The brilliant opening in April! Avenue in the capital, Pyongyang — only the propaganda sign, which felt a Communist regime. Next to the public sector and within the public sector in North Korea, developing the market economy, which, according to South Korean observers, allow the emergence of a new capitalist bourgeoisie.

“The past five years were not a time of the North Korean economic miracle, says Andrei Lankov, engaged in research work at the University of Kunmin in Seoul. — But the economic situation has improved significantly”. About the state of the economy the closed Communist regime of either no statistics or it is not accurate. Many observers in South Korea estimated economic growth in the North in recent years by 2-3% annually.

The South Korean Central Bank estimates the growth in the Communist regime during the reign of Kim Jong-UN by about 1% a year. The exception was the year 2015, when the drought caused damage to agriculture and the production of electricity at hydroelectric power plants. Data for 2016 yet, and they would also be only approximate. “There is always the risk that our stats are completely incorrect,” says researcher of North Korea Pak sung soo (Park Son-sung) from Dongguk University in Seoul.

Like most observers, he explains the economic stabilization of two factors: the decentralization of decision-making processes in agriculture and enterprises, and strengthening the role of private markets in the country. Some observers believe that the economic progress of Pyongyang’s very limited. This is a misconception: a rural part of North Korea is booming, says Lankov and quotes the words of John Kennedy: “a rising Tide lifts all boats”. The number of markets is estimated as 400-500, and over the years their number has increased. The North Koreans may sell the goods behind the counters in the premises of the markets, while they daily pay the market tax administrator, according to Hong JI-hwan (Hong Jea-hwan) from the Korean Institute for national unification (KINU) in Seoul.

The market is booming, factories are idle

These markets are sold imported from China goods, clothing or food of their own production, says Hong. Also sell shoes and fuel that people made themselves. Institute KINU estimates the number of sellers and administrators on the official markets of approximately 1.1 million people. Added to the black market. Without these markets the North Koreans would be unable to survive, said hon. Many factories are idle.

On the role played in the economic recovery of North Korea the leader of North Korea Kim Jong-UN, opinions differ. Kim proclaimed to stimulate the economy and nuclear weapons production the main directions of state policy. It not only allows private markets, it contributes to economic growth, says Russian researcher Lankov. Two reforms in 2012 and 2014 Kim, at least on paper, gave more freedom to the agricultural sector. Kim let the markets just because they bring tax revenues to the state, objected Hong from the Institute of KINU, this is not a long-term strategy.

Private markets are also free to develop its own dynamics, which is difficult to stop and cancel. For many years, in particular, with the help of the currency reform of 2009, the former leader and father of Kim Jong-UN, Kim Jong-Il tried to kill previously valid niches of the private economy. But after the protests in 2010, the regime retreated, and private markets are blossoming again. Since then, more mode did nothing to quell the markets, says Hong from the Institute of KINU.

Uncertainty calculations that measure the volume of a market economy of the North of the Peninsula, is very high. The share of the private sector in the economy is estimated at 25-50%. “If it’s 50% that we are moving in the direction of the selected Scandinavian welfare States,” says Lankov. It is also unclear how observed the law of 2012, which the farmers must pass 70% of the harvest to the state in payment of state production expenditures and 30% can write for their own use or sale. Nobody knows if it actually functions, says hon from KINU.

Interviews with refugees have shown that different regions of North Korea are controlled in different ways. It is also unclear how reform is implemented in 2014, which was aimed at the return of family enterprises in agriculture. “Agricultural cooperatives universally abolished,” says Lankov. North Korea under Kim Jong Yne made a step forward, from which China has started its journey from a socialist planned economy to a market economy.

The influence of the market economy penetrates not only in agriculture but also in consumer services and manufacturing industry. Private enterprise was allowed for a long time, although they are illegal, says Lankov. Formally and payments businesses are registered as public, in fact they are managed as private. There are not only private restaurants and retail shops, but also private enterprises in the mining and private refineries. A significant proportion of the fisheries, as well as intercity bus service are in private hands.

“The regime does not recognize private ownership of productive capital, but it guarantees the independent management of local companies, as a separate part incorporated in the state enterprise,” explains Lee Jae-Yong, (Jeong Hyung-gon), the Vice-President of the Korean Institute for international economic policy (KIEP). Thus remains the ideology of a socialist nation, and at the same time developing the new capitalist bourgeoisie, as the engine of economic growth.

The growing prosperity of this layer, Don-ju, or “masters of money”, it is possible to estimate the number of mobile phone users in North Korea. The number of contracts on mobile phones is estimated at three million or more with a population of about 25 million people. The number of actual users may be much less alert such observers as Lankov. So how, given the rapidly growing rates of mobile communications in North Korea, it is appropriate to have multiple phone numbers. Therefore, a more realistic number is over two million, says Lankov. This is much less than in South Korea, where the number of contracts on mobile phones exceeds the population.

At the same time, the story of mobile phones in North Korea explains why the regime, despite the special economic zone, has difficulty in attracting foreign direct investment. Mobile network since 2008, created the Egyptian telecommunications company Orascom, which got a monopoly in this area until 2012. Then North Korea opposed her state competitors and at the same time took away the business from Orascom. Such is the fate of every successful foreign investor in North Korea, Lankov says. “They can’t stand when they make money, and then expropriat enterprise”.

Don-ju, which in South Korea is also called “red capitalists” play a role not only in the private sector, but as investors in the kind of public-private partnerships. These people supported the regime in the construction of new houses on the Avenue Remen says Hong from the Institute of KINU. In return they received the right to use these buildings, not just housing. Or do they get medals that show their relationship with the regime — to protect their formally illegal business.

Red capitalism, which developed under the socialist regime, however, brought North Korea forward only conditionally, warns Lee Jae-Yong, KIEP Institute. Focus Don-ju on a small trade and transport services indicates that performance actually does not grow, grows only trade. Lee Jae-Yong, says that an improving economy is an illusion. The Kim regime remains ambiguous, mixing planned and market economy, and the economic situation remains fragile, says the economist.

While North Korea’s threats and a failed missile test maintains the tension in northeast Asia, the US is preparing new sanctions. President Donald trump in an interview at the weekend said that it is considering the option of a military response to a nuclear test Pyongyang. His national security adviser Herbert McMaster (H. R. McMaster) has warned about a possible reaction to the missile tests by North Korea, America is considering the options from tightening sanctions to, in case of need, the military option.

Last Saturday, North Korea for the sixth time this year launched the missiles, which according to South Korea exploded after a few minutes. Thus the country, by her own admission, responds to the actions of the United States, which increased the pressure. As quickly as possible every effort will be taken to strengthen nuclear deterrence, said the Communist regime on Monday.

Meanwhile, the government in Washington aims to reach international agreement with its new course directed against North Korea. Trump weekend was invited to the White house criticized the Philippine President, Duterte Rodrigo (Rodrigo Duterte), as well as the Prime Minister of Thailand prayut Chan-Loci (Prayut Chan-o-cha). The representative of the us government is motivated by the fact that threats from North Korea are so great that it is necessary to speak with all partners in the region. Last week the Minister of foreign Affairs Rex Tillerson (Rex Tillerson) on the UN security Council has already called for a tougher course against North Korea.

Meanwhile, America and South Korea arguing about the financing of the installation of a new missile defense system Thaad. McMaster has committed to the review of funding arrangements. The missile defense system will be installed in accordance with the status of forces agreement, under which South Korea would provide land and equipment, and the United States will pay the costs of operation and maintenance. After the performance of the government in Seoul for the United States it is not about the termination of existing contracts, and regular, coming in 2018, a new round of talks on the status of the troops.