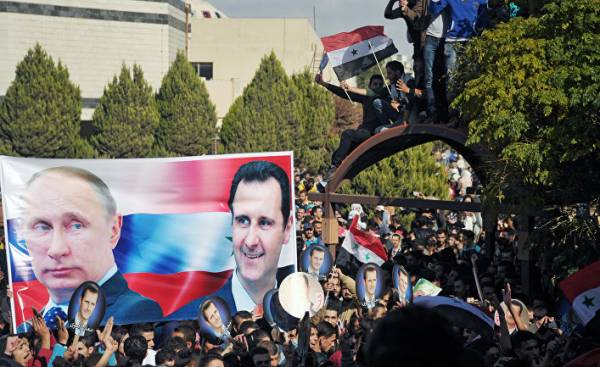 Right now the bus pulls up with the first batch of migrants, who yesterday morning was in al-Vaer of the city of HOMS (Western district of HOMS — approx. ed.). In the seventh year of the war in Syria between Russia and Iran did the competition. Despite the fact that both countries support the Assad regime, their goals are different.

According to Russian military expert Pavel Felgenhauer, loyal to Iran, armed groups are numerous and strong, and their relations with Russia very complicated. Pavel Felgenhauer points to the fact that Russia is developing a plan to reduce Iran’s influence in Syria and increase its military presence in the country in the near future the number of Russian troops will reach ten thousand. However, officially Moscow has announced reduction of its forces in Syria, especially the air fleet.

Felgenhauer added that like Iran’s relations with the Lebanese, Iraqi and Afghan militants, Russia seeks to build a similar system, with the groups loyal to Moscow. Moreover, the use of local armed groups cheaper than the Russian soldiers. A similar formation was created by the Americans in Iraq — the “Sons of Iraq”.

He also drew attention to such forces as “desert Falcons”, “5th assault corps” (part of the Syrian army — approx. ed.) and “Jerusalem brigade”, noting that these groups have received funding and support from Russia and participated in several battles.

According to the Syrian source, while both Russia and Iran support the Syrian government, their strategies differ. Moscow is going to improve the situation through the normalization of relations with Turkey over its support of the opposition and the spread of influence in the North of Syria. Iran rejects this approach.

The source added that the difference in the positions of the players that support the regime in Damascus, it became apparent after a final control of Aleppo in December last year. Iran and its armed groups were determined to reconcile with the opposition in Eastern Aleppo. But at that time Russia had another plan — to negotiate with the Turks about the evacuation of 34 thousand people from Eastern Aleppo, which angered Iran and the Lebanese Hizbullah.

The source noted that the portraits of Putin deployed everywhere in the streets of Aleppo, indicate that the increased Moscow’s influence in Syria, with Iran, another ally of the regime.

The withdrawal from al-waer

Preparation move the first batch of Syrians from al-Vaer in HOMS nearing completion. It is expected that all leave the neighborhood in the next few hours.

Sources said that the district left more than 300 families, a total of 1,300 to 1,500 people. Although most of the displaced are women, children, the sick and wounded, there are 150 fighters of the armed opposition. It is expected that other areas people will leave in the coming days.

A few days ago, the armed opposition and regime forces have reached agreement on a number of points, particularly about the opposition from the area of al-Vaer in the Northern suburbs of HOMS, Idlib, Jarabulus or the suburbs of Aleppo. The agreement will be implemented within two months.

Under the agreement, the opposition elements would leave the area in the direction of their controlled Northern areas of HOMS, Idlib, or of Jarabulus in the Northern suburbs of Aleppo near the Turkish border.

Instead, regime forces relieve the siege from the area, allowing passage of food and medicine, not arresting anyone without inspection. Since the area comes under the control of the regime.