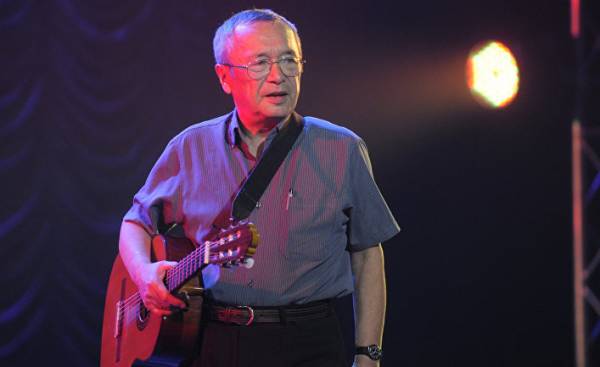 This weekend in Helsinki performs bard, poet, composer, playwright and screenwriter Julius Kim. Kim’s song sounded in 50 films, including the cult Soviet film “Bumbarash”, “moustached nurse”, “12 chairs” and “Ordinary miracle”. In the Finnish capital, one of the founders of author’s song came first.

In anticipation of the concert, Russian news service Yle talked to a famous folk singer about the creative inspiration, actuality bard, dissidence and political situation in Russia.

Yle: you also Have a creative six decades. How do you find inspiration?

Yuliy Kim: the Bardic song is a genre of art, and who can do it, he does. However, I have a bard song with a strong bias in the theatre.

— It all started with the fact that I was writing about certain events in my life. I started to write them in College. There was some trips, was some love. That total was enough for first songs.

For example, the song “Ryba-kit” I wrote in my last year in College, when he signed a distribution in Kamchatka, much to the delight of his superiors. All my friends in the group did not sign anything, they didn’t want to go from Moscow, and I wanted to be. My boss was very happy that I found such enthusiastic and romantic. And then I wrote a humorous song about a whale. “No whale, no whale, no whale not seen” — the main chorus.

I have lived in Kamchatka for three years, and then came regularly, and the last visit convinced that the fish kit is. While walking on the Kamchatka Bay we suddenly saw a whale, but a new song I wrote.

— It’s like asking how important song folk art. However, this genre of art have emerged relatively recently, in the middle of the last century. To ensure that the genre has become a mass phenomenon, it took years, it took the thaw in the Soviet Union. Then there was bards first call: Vizbor, Vysotsky, Okudzhava, Galich, and I with them.

Bard music lives on to this day. All the time there are some festivals in Russia and abroad, as, for example, now in Helsinki. I went abroad on a very broad and crowded festivals. America goes through several a year in Israel — two or three, Germany had held such festivals. And we are talking about the Russian-speaking audience. This, of course, our emigration is going to these festivals.

— It turns out that copyright music is typical Russian genre…

— Yes, some folk arts of the Russian intelligentsia. However, not only Russian. There are bards who sing in Ukrainian, there are bards in the Caucasus, but mostly bards sing and write in Russian.

— How do you work in Soviet times and as it is now?

— Of course, now freer to work, because in the Soviet time, because I was working all the time with the theatre and cinema, and there had to follow the text, and many thoughts were removed under the text. Now do not pay attention. Now there is a very strong and legitimate things against the current government, that the government not to miss, and there are any conflicts etc But iron censorship, which was under the Soviet regime, not now.

— You continue to write on the topic of the day?

— You know very little. The last song I wrote somewhere in the 90 th year. This song “Letter to the Grand Prince of Moscow Grand Duchess of Lithuania” — letter to Gorbachev, Kazimir Prunskiene. She was the Prime Minister of Lithuania, when all the Baltic States going to withdraw from the Union, and Gorbachev was trying to keep that led to conflict, and eventually he let go of the Baltic States. I remember with pleasure and sing this song, and all the dreams sing it to Gorbachev, but so far it didn’t come to that. I think he has enough humor to laugh at it.

As for the current topic of the day, sometimes you want something to write, but once I start to put pen to paper, then pop those who are younger. They are better than me are already doing.

— What about the song about Putin?

Yeah, I have three, but they are lightweight. But there is one song, not only about Putin, there is, rather, about a Fifth column. This song is serious. I was so upset by the events in Ukraine, my heart broke.

— In the Soviet years you participated in the human rights and dissident movements. And now you consider yourself a dissident?

— The dissident movement in the former sense, almost none. There is an opposition movement that is trying to act within the law, legally. Authorities this movement is shackled, persecuted, imprisoned, especially outspoken activists like Udaltsov and Dading or those who came to Bolotnaya square in 2012. And such persecution is.

Of course, after the air of freedom, which we drank in the 91st year, it looks like a rollback. There is still quite a strong formal opposition movement of different directions, which acts within the law and resort to legal methods: the individual pickets, meetings, etc. They do what the dissidents could not afford it, and if allowed, they immediately imprisoned or expelled from the country. Therefore, in Soviet times, dissidence was the opposition that once was.

— If you assess your career, are you satisfied?

— Of course, I can’t say that I wrote “Anna Karenina” or “War and peace”, but few can boast some powerful tasks. However, I can say that there are a few dozen pieces that I like so far.

— What is the best or could be an interesting compliment that you received?

— Yes, there was such a compliment. I have the song imitation of Pushkin, imitation of the poems about school. It has a line: “In October baranello nineteenth day.” And suddenly I saw this line in the form of an epigraph to the article about the Moscow Lyceum. The journalist quoted these verses, and at the bottom signed: A. S. Pushkin. That was the highest compliment.

— Do you give concerts in different countries. Is the audience in Russia and abroad?

— No, the crowd everywhere is the same — my generation and our children, and now grandchildren, look.

— With what mood you come to Helsinki?

— I came with the mood uncertain, as I don’t really imagine the local audience. I will see how you begin to take my singing to the congregation, and if I feel they need something easy, or, conversely, poglobalnee or more with a political slant, or with a theatrical bias, I will Orient along the way.

And to summarize, can you give any advice to Russian-speaking residents of Finland?

— I wholeheartedly encourage the audience to be attentive to the bard song, because it has a long tradition of Russian song culture.