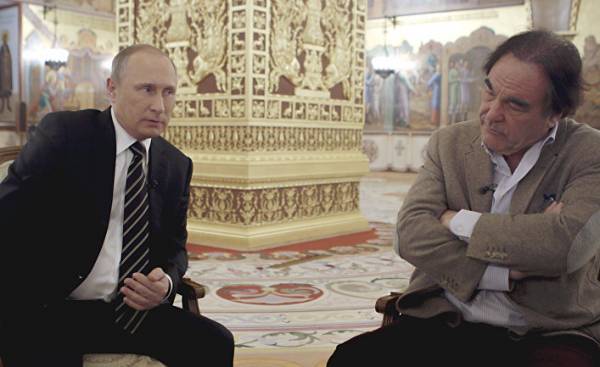 There is a saying — a talented person — is talented in everything. Sounds nice, but reality throughout world history shows that most often the situation is exactly the opposite — people talented in one, can be an absolute idiot at everything else. And there is no contradiction in this…

Oliver stone… Without exaggeration, a great Director who has created a remarkably intelligent, and are largely philosophical movies you want to watch any connoisseur of cinema. And at the same time is a clear indication of how easy it is combines in one person the genius and impenetrable stupidity.

A great Director, a connoisseur of human freedom and individualism, in recent years, busy praising the most disgusting in the world political regimes where freedom is an empty phrase…

First Fidel Castro, who for more than 50 years of government strangled the remnants of free thought, passed the economy is quite a prosperous country in the hands of the idle — state managers…. The person who messed everything up so that now his successors are forced to gradually back off — allowing some of the manifestations of private property, attracting American investors and tourists.

So many years of fighting windmills, decades of “no pasarán”, “Die for socialism”, “Viva Fidel,” “struggle against international imperialism”, 5-hour boring speech of the leader, and all this for what? For the sake of 60 years to return to where so much noise and slamming of doors went.

Incredibly, a great Director and thinker Oliver stone — does not understand or does not want to understand.. For him, the loser Fidel is a hero, Havana David against Washington’s Goliath.

Very strange with the late Hugo Chavez, the great results of the Board which are that once-rich oil country has sunk into sales of toilet paper under the supervision of military….

The phenomenon is not new. In the West, like inflamed incomprehensible and unfathomable love for all sorts of dubious regimes, whose main advantage is the persistent desire to oppose himself or the world, or a substantial part of it.

And what is most strange — it is not a lot of brainless idiots… the Apologists of different kinds of authoritarian leaders with big ambitions and small-town tyrants, suddenly becomes just not stupid people, and it is currently thinking.

How many Western writers, public figures and politicians who, from the time of Lenin admired the Soviet system?

With absolutely sincerely do not understand how it is hypocritical and false, have not seen that talk about freedom is the wildest construction of misanthropic regimes, and the songs on “protecting the rights of workers”, cover the most savage and shameless humiliation of the very workers they are peasants.

What can we say about the others, so if such a great intellect, visionary, philosopher, thinker, as Hg wells did not understand…

Somehow does not turn the language to call Hg wells and Oliver stone’s “useful idiots”, but nothing else.. In the end, the cynic Vladimir Ilyich Lenin it is not the last fool, and he understood perfectly what category of people he was dealing..

Well, here is a certain comrade Edward Snowden. Defending the very right views. Opposes the the power listen to private citizens. Against state interference in private life. Against the omnipotence of the elite, against the oppression of citizens to power structures.

In General against all the bad and all good.

It sounds wonderful, who can be against? But the most remarkable begins when man fights against wiretapping and government intervention in private life in the United States, and does it sitting under the wing of Putin, who interferes in everything and controls its own population to the extent that American politicians do not prividitsya in the most daring fantasies..

But a smart guy, one of the best programmers in the United States…

And because the worst thing is that in most cases, the “useful idiocy” is not something calculated on the profit. I am sure that Putin is a penny not paid Oliver stone a vile sycophantic movie.. just like Hg wells could not take a penny from the Soviet leaders, and Edward Snowden truly believes that sitting under the hood of the FSB is fighting for the freedom of ordinary citizens.

All this is done quite frankly. Oliver stone is not pretending that he likes odushevio their countries, Castro and Chavez, he genuinely thinks of Putin as a fighter against American globalism and the future of mankind..

What chemical process occurs in the minds of right idiots, and how people who criticize the USA for violation of human rights, can sincerely admire leaders who leave power only feet first? Science is powerless to answer this question…

Naturally, the formation of a hopelessly ill leftist and anti-globalization consciousness begins in College, when most young people light up the ideas of universal justice and denounce the American and European system. This is a very fun and funny — to spit against the wind, and most importantly — absolutely safe.

Oliver stone after another day on he lived in Havana, where he was imprisoned for 10 years for any wrong word.. Not living in Venezuela, where the heir to Chavez, his former drove Nicolas Maduro is firing on demonstrators.. lives in Moscow, under the shadow of Putin, who is already sitting in his chair 99 years, and apparently not going anywhere..

The human rights activists in the US and anti-globalists live in democratic States, studying in good universities, why not admire Fidel, Che Guevara or Putin? It’s so cool..

However, the time goes by, people grow, their views change, and the vast majority of leftists eventually become normal people, like punks or hippies after 20-25 years cut and become law-abiding citizens.

Only a portion of people infected with the leftist virus, remain so until the end of life and join the ranks of the useful idiots…

It is them we see in Moscow, Havana, Caracas, and other “revolutionary” capitals.

Thanks to the leaders who are supposed to be shake hands, look sleeker and nobler than he really is. Thanks to them, thieves and crooks can dress up in the clothes of the fighters for freedom…

Oliver stone is not alone…