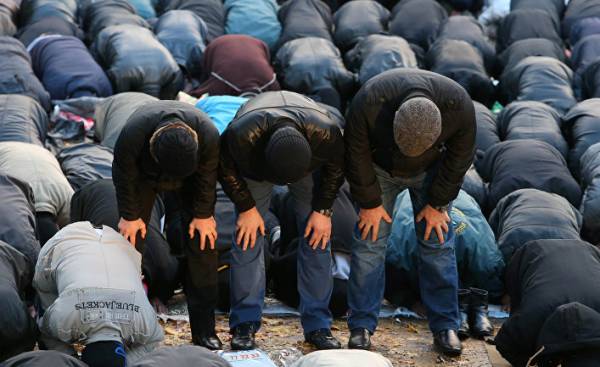 In an interview to Russian Islamic website Islam News Deputy Chairman of the religious organization of Muslims of Kaliningrad Imam Bekhan Suleymanov spoke about how this issue sees the Muslim community in Kaliningrad.

There were no objections and the city authorities issued a license for the construction of a mosque, which would be the only mosque in Kaliningrad.

When the erection of the building has entered the final stage, the regional court issued a decision banning construction.

Our attorney, to protect our right to build the mosque, said, “On what grounds the decision was made to ban construction of mosques?” “In court we were told that we violate citizens ‘constitutional right to travel” — said the Imam Suleymanov.

In accordance with a judgment previously granted land for the construction of the mosque and the unfinished building was confiscated. According to trusted source, the court decided to select a plot of land and built on it the building. This is the ninth time the Muslims get the land for the construction of a mosque; eight times before the Russian court in Kaliningrad confiscated land at the initial stage of construction. Muslims, however, have not given up and passed all the relevant legal procedures in order that the government gave them permission to build the mosque.

The Russians ignore the sacrifices that were brought by the Muslims for the liberation of Russia.

Imam Bekhan Suleymanov recalled that during the liberation of the city from the Nazis killed a lot of Muslims.

“This town was liberated by the representatives of all religions, including the hundreds of thousands of Muslims. In Kaliningrad, about 100 churches there are Protestant churches and Catholic churches, and to build a mosque are not allowed. So where is the justice? When it was required to defend the homeland — we are together and we are now ready to do it, but when we want to pray, pray as representatives of other faiths, we are deprived of this right, as if we were not citizens of this country. There are hundreds of thousands of Muslims killed during the liberation of Koenigsberg from German occupation,” says Suleymanov. He is deeply saddened by the fact that the role of Muslims in the liberation of Kaliningrad from German occupation denied, and that their participation in these events helped them to implement the project of construction of even one mosque in the region.

At this time, local authorities have created “parallel worlds” in the face of an alternative organization, to counteract our efforts and prevent construction of the mosque.

“In Kaliningrad after our organization banned the construction of mosque in the town and confiscated the land on which the planned construction, was founded the second Islamic organization, which has offered a plot of land in the woods, near a military training ground where there are no roads and where not to go transport. This land was given to them, not us, and they are acting on behalf of all Muslims, and I agree that they offer the city authorities. We complained to Russian officials, but they said, “you two get along”,” — said the Imam Suleymanov administrative about this “football”.

The Muslims of Kaliningrad have appealed to their brethren in the faith, in leadership positions, particularly in the Council of Muftis of Russia, which has already put forward its own terms.

“We have already sought assistance to mufti Gainutdin and he promised to help us, but said that it would be necessary to join the Council of Muftis of Russia. We were ready for it, just to continue the construction of the mosque, but the Charter of the Council, who showed us said that they become the sole owners and out of our religious organization can not. We can lose everything, so we abandoned this idea”, —said the Imam. © RIA Novosti, Evgeny Odinokov | go to fotoreceptor of the Council of Muftis of Russia Ravil Gainutdin, speaking to reporters on the day of Eid al-Adha. 25 Jun 2017

Thus the Muslims of Kaliningrad have not received help, so we continue to appeal to the officials of the same high level.

“Talgat Tadzhuddin has promised to help us, but he had to wait until the situation changes. Our city was visited by the head of Tatarstan Rustam Minnikhanov, but he’s never met. However, he spoke out in defense of our mosques and we are grateful to him for that. In addition, we have appealed to Ramzan Kadyrov, and believe that if he could, he would have helped us,” — said Suleymanov.

Imam Suleymanov believes that the issue of the mosque is not a problem of the level of the city authorities. “The mayor of Kaliningrad Erashov at the time we donated his own money to build a mosque. The ban on construction is not the level of the city authorities. And if he could solve something that would not interfere with the construction of the mosque,” said Islamic activist.

Imam Suleymanov pessimistic about the future, but at the same time, he says that the Kaliningrad Muslims are willing to make some concessions to reach a compromise.

“After the approval of the Supreme court of the Russian Federation of the decision of the local court about the ban on the construction of the mosque, we turned to the European court. Our complaint will be investigated in the near future. At the meeting with the administration we were told that we can’t do rituals: funerals, weddings and religious holidays. They offered us compensation for the construction. If we can guarantee that the mosque will be built elsewhere in the city, we abandon the mosque, and while there are no guarantees that the land that we now offer not taken away” — angrily said the Imam Suleymanov.