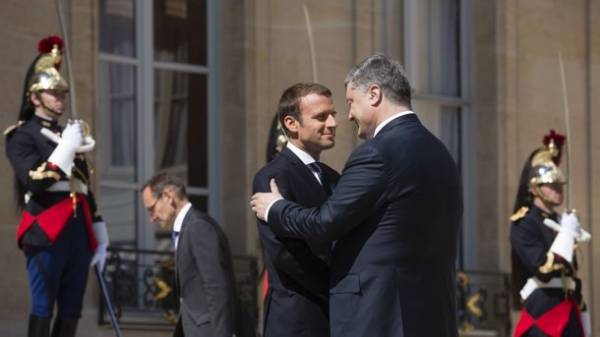 Yesterday in Paris the President of Ukraine Petro Poroshenko met with the newly elected President of France Emmanuel Macron. After the talks, the two leaders made statements. During the meeting the two leaders discussed bilateral relations of Ukraine and France, the situation in the Donbass “Norman format”. However, specific agreements, in any case, in the public sphere, this meeting did not bring, experts say. At the same time, the President of France had shown a strong desire to achieve results in the negotiations on conflict settlement on Donbass.

The results of the negotiations: formal 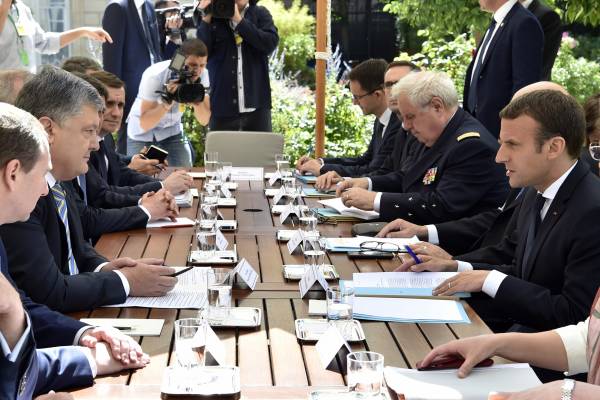 According to the President of Ukraine Petro Poroshenko, the negotiations were thorough. The parties agreed to accelerate the holding of the bilateral intergovernmental Commission on cooperation in the sphere of investment climate improvement, energy sector, agricultural sector and processing industry, as well as on the revitalization of negotiations to attract French investors to work in the industry of recycling. In addition, the parties agreed to develop multilateral cooperation within the framework of the implementation of the Association Agreement between Ukraine and the EU.

“The lion’s share of our talks was devoted to the situation in the East of our country, opposition to Russian aggression against sovereign and independent Ukraine and situation in Crimea. We thoroughly discussed all the circumstances, determined the tactics of our actions in the next few weeks. We agreed to hold consultations and coordinate positions in order to increase the effectiveness of a possible meeting in the Normandy format. We don’t need hours of negotiations. We believe that should be the quality of the prepared documents the approval of which should finally bring peace to long-suffering Ukrainian land,” Poroshenko said.

So, according to Macron, France is the continuation of the Minsk process and supports active cooperation in the framework of the Normandy format to resolve the conflict in the Donbas. In addition, the macron is ready to discuss with the leaders of Ukraine, Germany and Russia. According to him, such a meeting could take place in late June-early July 2017.

“I would like to mention that France is ready to continue efforts in the “Normandy format”, we are ready to hold a new discussion in the “Norman format, – he said, – We intend to continue the Minsk process…We support the idea of the possibility of active cooperation in the “channel format” with the involvement of the OSCE. That’s what I offered to all parties.”

According to Macron, he suggested Poroshenko and all parties to the “Normandy format” first take appointment. In particular, we are talking about the withdrawal of military forces and weapons, the admission of international observers to all locations and the release of the hostages.
In addition, macron said that he wants to receive the report of the special mission of the OSCE about the real situation on the border of Ukraine and Russia.

“Ukraine is ready to consistently perform all items of the Minsk agreements, and the position of the breeding effort, we are also ready to perform when the condition that will ensure the OSCE presence 24 hours a day and 7 days a week at the point of production”, – he said.

In addition, during the talks the presidents discussed the need to expedite the process of release of prisoners, said Poroshenko. Today, the occupied territories are 128 of the hostages, over 40 – in Russian prisons, he said.

“I really like the approach of Mr. President, result oriented, specific, practical and without further ADO. Our arrangements that we put in the paper projects possible solutions to the “Normandy format”, perhaps they will be called “formula Rules”, but we will be able to show the public a plan for peace and de-occupation of Eastern Ukraine” – summed Poroshenko.

Experts: the Makron is determined to result in the negotiations on the Donbass 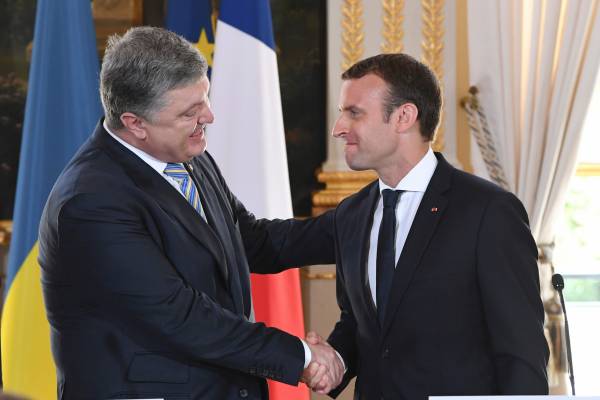 “In the position of the Macron does not seem to be much difference from what was told by his predecessor as French President Francois Hollande,” says Will, “Similarity Rules and Tillerson that they are not committed to a long talk, marking time in one place. These people want to see the solution, albeit not a month or three, but up to the end of the year or next year, by next summer, they want to see that the conflict in the Donbas will be resolved. And they will strive to achieve this”.

With what macron have demonstrated a willingness to achieve concrete results in the negotiations on the Donbass, I agree and an expert in international law Anton kuchukhidze. Thus, for this he puts to the fore some great challenges, preferring a more concrete and practical – the withdrawal of troops and exchange of prisoners.

According to Will, it is the desire of the Macron to achieve a result in the settlement of the conflict in the Donbass dictated by socio-economic problems, which, in particular, are associated with anti-sanctions. For example, the losses of the French farmers and producers in foreign markets. And macron, on the basis of economic and financial considerations, will strive to minimize the loss of the French economy in foreign trade. Partly to make it will help the implementation of the Minsk agreements that will make major sanctions against Russia senseless, says Will. According to the expert, the same task facing the United States and Germany.

The expert notes that now the work will continue on the creation of the road map in the framework of the Minsk agreements, which give the opportunity to make some maneuvers, using a variety of tools of influence on the process and on the positions of all parties.

However, more specific agreements, in any case, in the public sphere, the meeting between the two presidents did not produce, said Anton Kuchukhidze. At the same time, macron said that there are a number of conditions and suggestions that it specifies on the private level Petro Poroshenko and Russian President Vladimir Putin.

“This means that there is at least on the declarative level, some work in the framework of the “Norman Quartet” on finding the situation out of the impasse, but the specific we do not know – he said, – with regard to the public sphere, the Makron periodvery the necessity of implementing the Minsk agreements, said that advocates for increased “Norman Quartet” and the role of the OSCE”, – said Kuchukhidze.

Left open the question of what is France’s position Poroshenko in relation to the implementation of the Minsk agreements, namely, that the issue of security must be implemented in the first place, or will stick to the previous logic, which envisaged the simultaneous implementation of political and security aspects, said the expert.

Moreover, the macron stressed the importance for the parties looked at the process of settlement of the same, thus emphasizing the fact that the negotiating parties different positions relative to this, said Kuchukhidze.

We will remind, earlier Petro Poroshenko I carried out a number of working visits to Germany, USA and Brussels. Poroshenko recently met with German Chancellor Angela Merkel at the end of may held full-scale talks, and last Friday in Brussels politicians spoke at the summit of the European people’s party. And last week, Petro Poroshenko met personally with the President of the United States Donald trump and key members of his administration. All of these visits had a very positive evaluation as the Petro Poroshenko and world leaders and experts.