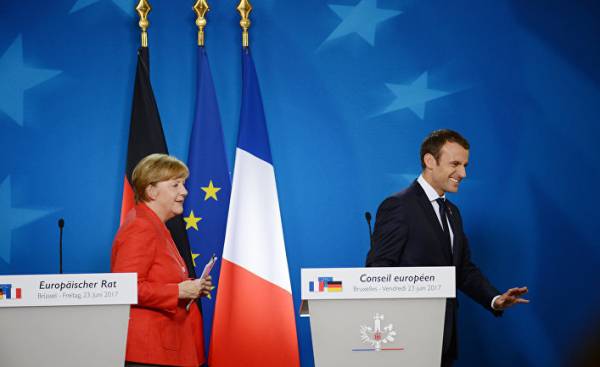 Did not have time to appear on the scene, as was the second Hollande! Angela Merkel picked up Emmanuel Macron on his first European summit, but a state-subsidized press prefers not to notice anything.

There are two approaches to the past in the end of the week EU summit. The first is to review the results of the meeting and counting points. The second involves the reading of a state-subsidized press. And between the two of them find little in common.

What really decided the European Council

In fact, on 22 and 23 June, the European Council did not accept any of the French demands, which have long said the President. In particular, he never started a discussion on the issue of working abroad, about which France has long fanned his cheeks, demanding the tightening of existing measures.

This silence means for the French defeat, which suggests that Europe has little regardeth Paris, mired in unfavorable arms of Berlin. And the election of a new President who thinks he can challenge to Donald Trump, nothing changes.

As for employment, the following should be noted in the conclusion of the summit:
“Building on the Council conclusions in may 2017, which relate to strategies for the future of industrial policy, the European Council underlines the fundamental role of industry, which is the important driving force of economic growth, employment and innovation in Europe.

As a continuation of the previous assumptions, it requires the adoption of specific measures to make the single market a solid and competitive industrial base”.

These findings do not relate to work abroad and emphasize that the key to prosperity is to protect the industry. Such in the highest degree German views shed light on the vacuum side of France: what is the industrial policy of Emmanuel Macron? It is not known, but the European Council, curiously, dealt with issues that have no special significance for France.

As for attempts to prevent the Chinese for a pittance to buy our technological gems here Makron again furnished. Here’s how the Council responded to the request of France:

“The European Council is convinced that trade and investment can be free only when they are equitable and mutually beneficial. In this regard, he proposes to the legislature in the shortest possible time to agree on a modern and compatible with WTO trade defense instruments, which will strengthen the EU’s capacity to effectively deal with unreliable and discriminatory trade practices, as well as a distortion of the market. The European Council mandates the European Commission to follow their speedy and effective implementation through Executive and non-legislative measures designed to make trade practices and trade remedies, the EU is more active and effective, and to propose, if necessary, additional measures. In addition, it directs the Commission and the Council to deepen and advance the discussion of increasing reciprocity in the field of public agreements and investments. In this regard, he welcomed the initiative of the Commission for the control of globalization and the analysis of investments of third countries in strategic sectors, without prejudice to the powers of the member States”.

In other words, this issue was raised to cater to the Macron, however, the European Council stressed that it is not going to take any procedural measures and guidelines for this reason, and in any case would not violate WTO rules. In addition, this theme will go to the European Commission and will be discussed there.

On top of all this rejected the proposals of France, Angela Merkel took her protege by the hand, and weighed a humiliating slap on the soft spot, as has happened many times in the past. The execution usually takes the form of a joint press conference where the President of France States that more not to do anything without the permission and consent of Merkel.

“I want to emphasize how important it is, in my opinion, what we are very much prepared our statements on the Board that our performances have taken one line and we can attest to this.

In any case, that’s what I’m going to try to do in the next few years, because I believe that when France and Germany speak with one voice, Europe can move forward. This condition is certainly not sufficient, but it is in any case necessary.”

So, we learn that the statements of France at the Council meeting was prepared in advance together with Germany and the Makron to “Porky”. On the issue of migrants he feels obliged to say the following:

“We need to accept refugees, because this is our tradition and honor. Again, refugees are not just immigrants. It’s not economic migrants, but people fleeing the country for freedom, fleeing from war or political views. We should show solidarity in that case, if one of our neighbors is faced with a massive influx of refugees or migrants”.

Thus, we have assembled all the ingredients to five years macron left inviolable developed during Hollande’s presidency of the European doctrine of systematic alignment to the position of Germany without any reciprocal benefits for France.

At the same time, government-subsidized French press gives embarrassed headers that are designed to hide the failure of Macron. If you don’t count le Point with his “Makron in Brussels: the first conversation, the first failure”, the other publications noted impressive flattery.

So, Les Echos, which is not even trying to hide that he fully supports President, wants to force the reader to believe in the victory of France. Le Monde noted quite obscure title: “the European Council: Europe is preparing a breakthrough with Macron”. Such utter nonsense is evidence of a strong desire to embellish events.

Le Figaro doesn’t sound quite as obsequious: in publishing, limited publication notes the AFP and focused on defense issues. On this subject the paper of Serge Dassault (Serge Dassault), of course, went too far with the title “macron welcomes the historic progress on European defense”, but did not wallow in servility your main competitors.

The main question now is, how much of the subsidized press will continue to undermine the credibility of such flagrant support of the President, who terrorizes the edition. 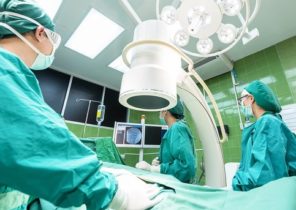 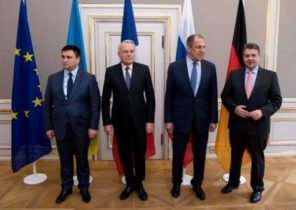