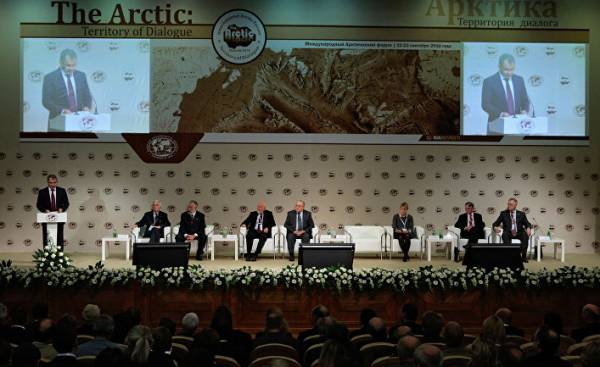 Anders Samuelsen clinked a glass of vodka with his Russian counterpart, the dialogue was meant to touch much more than just the Arctic. It was almost certainly what President Putin wanted from the meeting in Arkhangelsk.

It was one of the most peculiar meetings in the history of modern politics when Vladimir Putin on Thursday took part in the completion of a two-day Arctic forum in the Northern Russian city of Arkhangelsk near the White sea. Perhaps it would be more appropriate to say “almost big politics”, because the meeting was not the leaders of the other two superpowers, whose participation in events in the international arena usually gives them a special weight.

But those who sat together on the stage of the Arkhangelsk drama theatre named after Mikhail Lomonosov, a native of this area, the Russian scientist who lived in the eighteenth century who discovered an atmosphere around Venus:

The President Of Russia. His colleague Johannesson Gudny from Iceland, a member of NATO. Sauli Niinistö, the President is not a member of any military Alliance, Finland has a long border with Russia. And another moderator, the owner of the Studio Geoff Cutmore (Geoff Cutmor) from the Bureau of CNBC in London.

A discussion took place, which lasted an hour and forty five minutes. In addition to such expected topics as the Arctic, dialogue, cooperation, climate change and new transportation options, was also raised and the questions about Ukraine, the Russian intervention in the U.S. presidential election, the first summit between Putin and trump, the fighters with transponders and without, international law, ISIS (a terrorist organization banned in Russia — approx. ed.), Ronald Reagan, aerospace, and also large-scale demonstrations against corruption among the representatives of the Putin regime that have swept Sunday across Russia. In addition to the other.

Thus, the final session was a landmark for the forum, which was called “the Arctic — territory of dialogue”, and included a number of seminars on the far North, but it is which was about much more than that.

About Russia, which in diplomatic terms, has again become topical after the start of the crisis in Ukraine. Of the Nordic countries, which after a three year hiatus was re-directed of senior politicians in Russia. The attempts of the West to break relations with Russia on a number not associated with each other component parts, or divide it, and the attempts of Russia to counter this.

This took place in Arkhangelsk, a little South of the Arctic circle, and became a symbol of the peculiar situation of the region as an oasis of cooperation, but, if we talk about themes, it could happen anywhere.

About the meeting with Lavrov Anders Samuelsen said that the conversation was direct and that the participants clinked glasses of vodka and joked. And the final event of the forum was also pretty funny when, for example, jóhannesson noticed that it would be difficult to find two more different presidents sitting next to me, he is the head of state on a small island in the North Atlantic does not have its own army. And Putin is the head of the military superpower, possessing the largest territory in the world.

“However, the football team we will be better, sorry,” said the Icelandic President, what made Putin smile.

Just before this word took the President of Finland, to answer the question from the moderator about how to link the Arctic in a dialogue with the growing political and military tension.

“I don’t agree that the tension is increasing. In Europe, we especially see the need for dialogue becomes all the more obvious. I see that many of my EU colleagues now visit Moscow, even the Swedish foreign Minister. This is not tension, this is done in order to avoid tension,” said Niinistö and added that the big question the answer to which is unknown, is what will be the relationship between Russia and the United States.

“But if we feel that the tension exists, is there a better place than the cold Arctic, to remove this tension? Here, everything cooled instantly,” said the Finnish President.

“And this we say hot Finns. You should listen to their advice”.

Then jóhannesson assured that as Iceland and Finland “very cool” (game of words — approx.ed.).

Gudny Johannesson said, clearly referring to Russia’s seizure of Crimea, Iceland “can exist as an independent state only because of the XX and XXI century have more respect for international law”. And after Putin has previously answered the question from the moderator about whether Russia intervened in the U.S. election campaign, partial quotation from George Bush, who said in 1988: “Read my lips: No,” Icelandic President parried a Russian saying which became famous a year earlier by Ronald Reagan: “Trust, but verify”.

Then came the turn of Putin when the moderator wanted to know how the fact that the new us Secretary of defense James Mattis has called “aggressive steps” in the Arctic, helping to reduce tension.

“What… You… mean?..” — Putin replied slowly and a little hoarsely. “Our aggressive behavior?”

Jeff Katmor had to repeat the question, and Putin replied that Russia is developing its armed forces and its military power on Russian soil that has the right like any other Arctic state.

“Our moves are local in nature, while their steps in the Arctic are of a global nature,” said Putin, referring to the American missile defense system, which Russia considers a threat to its nuclear deterrence.

Furthermore, said Putin, the new Russian objects in the Arctic can be used not only for military purposes, but in connection with, for example, oil spills and the help of Russian scientists conducting researches in the Arctic.

It is expected for Putin

When the moderator asked in response to the EU demand to release the opposition leader Alexei Navalny, who is serving 15 days for organizing mass riots in Russia on Sunday, Putin said that Europe should be more interested in how the police use violence against demonstrators in Paris.

“Fight against corruption is a good thing, but it should not be used for self-promotion”, — Putin said, referring to Navalny, in his first comments to the issue of protests.

At the end of the forum Anders Samuelsen noticed that Cutmore as a moderator obviously could not miss the chance to talk not only about the Arctic.

“I don’t think it was a surprise for Putin,” said the Danish Minister of foreign Affairs.

Anders Samuelsen was not in a hurry and subscribe to the words of the President of Finland about the fact that now we are talking about stimulating dialogue and not increasing tensions.

“When people meet, then there is a dialogue and it gets publicity. But this does not mean that tomorrow we will solve the problem of Ukraine. There the conflict will still continue. But this illustrates very well that one does not exclude the other,” he said. 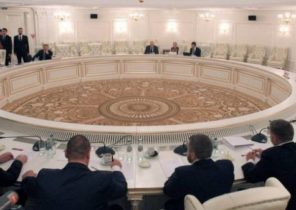 At the talks in Minsk, Kiev has put forward new requirements to the Russian Federation