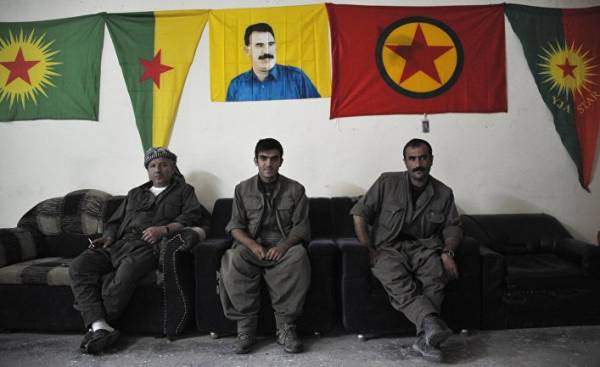 “A village watchman and two soldiers killed in the East of Turkey. A large-scale operation against the PKK in Diyarbakir takes place”. “48 members of the PKK “neutralized”, while Turkish military forces continue air strikes”.

These are two typical headline of the Turkish newspaper Hurriyet last week.

Every day we read about it, but very rare articles on the war against this group, which Turkey considers a terrorist going under major headings.

There were no major headlines and when the Turkish Minister of internal Affairs Suleyman Soylu (Süleyman Soylu), speaking Saturday, said that the units of the security service over the last nine months has destroyed 1068 PKK militants.

The war with the PKK ceased in populated areas of Southeast Turkey, where Kurds have the strongest position. The militant PKK members were forced from the cities and fled to the mountains, where it is easier to fight. Therefore, the war become invisible to the majority of Turks and the world.

“Indeed, the majority of Turkish people are not so much thinking about the war with the PKK. They are more interested in the war in Syria”, — say Gunat Akalin (Cüneyt Akalin), Professor of political science at the University of Arel, Istanbul.

In Turkey kills more than Ukraine

According to the International crisis group (ICG), at least 2844 people were killed in the period from 20 Jul 2015 to 30 may this year.

Data analysis MCG about the war between Turkey and the PKK and the UN data on deaths in the conflict in the East of Ukraine shows that the number of dead in these two wars from the 20th of July 2015, it was almost the same.

If, according to the UN report on Ukraine in this period died 992 person, the number in Turkey is at least 2300.

But the numbers can be even more. The conflicting parties consistently report that they destroyed 2-3 times more than the fixed MG.

According to ICG, for nine months from September 2016 to may 2017 was destroyed 455 members of the PKK and the Turkish Ministry of the interior claims that it was destroyed twice, that is, 1068.

The war has shifted from the cities to the villages

During the first phase of the war — from 2015 to early 2016 — actively fighting took place in densely populated areas of several cities in the Southeast of Turkey. Entire city blocks were in ruins.

It can confirm a team of journalists from Aftenposten, who visited the city Disru in March 2016.

But this war in the city enjoys the support of the people, said Japan Coskun (Coskun Vapan), Professor of the law faculty of the University Dicle in Diyarbakir in the Southeast of Turkey.

“If the PKK tries again to do the same, the population of the region will not support it,” he said.

Currently, the war in the cities stopped, and in winter, the Turkish authorities stated that they plan to build thousands of homes for those who lost their house.

But the fighting continued, and on average, it killed 100 people in a month.

“The majority of Turks believe that we need to destroy the PKK. And they believe that we must find a political solution. Even the most nationalistic Turks will recognize that the Kurds live here, most of them are very nice people, and we need to find ways of coexistence,” says Professor Akalin.

The office of the UN high Commissioner for human rights (OHCHR) in March this year published a report which States that in the period from July 2015 to December 2016, the conflict has killed at least 2 thousand people.

Over half a million people fled from the combat areas.

OHCHR said that it was documented many instances of exaggerated use of force, there were even cases of killings, disappearances, torture and destruction of houses.

In the report for the OHCHR Aftenposten writes that the Office of the UN high Commissioner for human rights monitors the situation in Turkey, although he’s not allowed to have representatives in the conflict area.

“A large number of dead, reported by authorities, shows that military operations in this area are still intense, — said the official representative of OHCHR Elizabeth Trussell (Elizabeth Elizabeth Throssell). — In our report of March this year, we expressed great concern about the current situation in the South-East of Turkey. We asked the authorities to investigate reports on serious human rights violations. As far as we know, no such investigation was conducted”.

The Turkish government has described the UN report as “unacceptable”.

“The unfounded allegations in the report more closely resemble the propaganda of the PKK”, says the statement of the Turkish Ministry of foreign Affairs.

The fear that the PKK is in Turkey, led the country into the Syrian war

For many years, Turkey has bombed what it considers the PKK bases in Iraq and Syria. In the summer of 2016 major units of the Turkish armed forces entered Syria to prevent Kurdish parts to establish control over all of Northern Syria and the Turkish border.

Turkey believes that the most powerful Kurdish group in Northern Syria, the people’s protection Units (YPG), is an offshoot of the PKK, and it should also be considered terrorist.

“We destroyed 3 thousand fighters of ISIS (an organization banned in Russia) and 10 of thousands of PKK members” — boasted the President of Turkey Recep Tayyip Erdogan (Recep Tayyip Erdogan) during the campaign before the referendum in Turkey this year.

Turkey is very critical of the fact that the US decided to support the Kurdish self-defence as the ground troops of the coalition against ISIS in Syria.