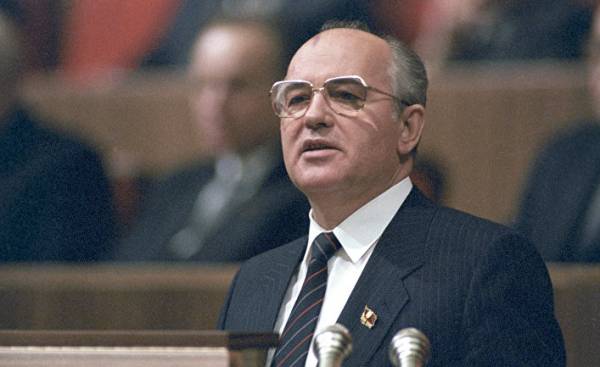 As a Senator, Sam Nunn (Sam Nunn) played a key role in the development and the struggle for acceptance by the government and Congress of the bill on the disposal or safe storage of nuclear weapons and materials for its production on the territory of the collapsing Soviet Union.

As told by Graham Allison (Allison Graham), the outgoing Director of the Harvard Center Belfer: “the lead Senator of the Democrats, Sam Nunn, and Republican Senator from Indiana, Richard Lugar (Dick Lugar), not only acknowledged the existence of problems, but and found her a great solution. Since the congressional hearing, it was too late, they have taken the original and clever move, having amended the bill on military appropriations. Under the amendment, the $ 400 million allocated for the defense funds could be used by the Minister of defence, to help Russia secure or dispose of nuclear weapons of the former USSR. Thus, the most important related to Russia political initiative of the United States for the period after the end of the cold war came not from the President but from the representatives of the parties in Congress that made the problem in the agenda and developed legislative measures for its solution.”

This interview was taken a scholarship from the Stanton Foundation nuclear security Bugarin by Marianne (Mariana Budjeryn).

Marianne Bugarin: the program for the promotion of disarmament Nunn-Lugar was a shift from thinking of the cold war to a new paradigm of cooperation with former arch-enemy of America — the Soviet Union and its countries-heirs. What prompted you to do this jump? What helped you to overcome the substantial resistance and to convince their colleagues in Congress to take a new approach?

Sam Nunn: a Turning point for me was not a specific moment but a series of events over a long period of time. It all started with my visit to NATO base in 1962, at the height of the Cuban missile crisis, when I saw for myself how close we came to nuclear war. In the future, I never ceased to be interested in as it may start a nuclear war, and, more importantly, how to prevent it. This is the first.

Secondly, during my time as a young Senator in 1974-1975 I attended with verification of the NATO base. There I saw the consequences of the American defeat in Vietnam and the spirit of the fallen of our military. Some officers secretly told me about the decadent mood of the soldiers guarding our tactical nuclear weapons and suffering from, inter alia, from problems with drugs and alcohol. Years later I felt for the Soviet Union loss of the Empire was a major event in ten, maybe a hundred times worse than the defeat in Vietnam for us, and that the army on Soviet territory, in Russia and other States of the former USSR is going through largely the same problems. The difference was that the Soviet Union was sitting in the warehouses with the biggest stockpiles of nuclear, chemical and biological weapons in the history of mankind.

Thirdly, I was influenced by my visit to Moscow immediately after Gorbachev to freedom after the failed coup in August 1991. During the visit I met with Russian leaders and Gorbachev, and came to the conclusion that the United States and humanity as a whole was under threat. All this is overlaid and made me think, which led to the origin of the Nunn-Lugar program.

— Your trip to Budapest and Moscow shortly after the coup of August 1991 have strengthened your intention to create a viable policy for the promotion of disarmament in the former Soviet Union. Could you describe in greater detail what happened during those visits? What have you seen and heard from you has convinced you of the necessity of immediate action on the part of the United States?

— I had a friend I met at the parliamentary negotiations of the past years. His name was Andrei Kokoshin, and in August 1991 we attended a conference in Budapest organised by, if my memory serves me, with the money of the Carnegie Corporation. It was attended by both Soviet and American and European experts. At the beginning of the conference we have heard news about the capture of Gorbachev. Kokoshin boarded the plane and immediately returned to Moscow. A couple of days later we were still at the conference in Budapest, when Gorbachev was released and the coup failed.

I was preparing to leave Budapest and return to the United States when Andrew called me and said, “Sam, you need to come to Moscow: in Russia, happening an important cause.” I noted that he used the word “Russia”, which, of course, talked about the direction of their thoughts. I said that I didn’t have a visa, to which he replied that he would send Russian — and again he said “Russia” — the Ambassador to my hotel within 45 minutes to bring me the visa. “Andrew, I said, — If you force the bureaucracy to work with such speed, it will be a sheer miracle.” To which he replied: “Admire!” Half an hour later came the Russian — or Soviet — Ambassador and I went on the road.

In Moscow, I spent three days. During this time I managed to see a parliamentary debate with the participation of Gorbachev, Yeltsin and other leaders of the Soviet republics, where they discussed the collapse of the Soviet Union. I listened to them for hours. We have also met with most of the new leaders of Russia, including [General Pavel] Grachev, who led a squad of paratroopers who defended Yeltsin during the attempted coup. In my meetings with the people who created the new Russia, they gave me to understand that he wanted to see her independent from the Soviet Union. Then I met with Gorbachev, who I knew from our past encounters, and spent a half-hour conversation. I was surprised, but he was willing to spend time with me during this difficult period. I asked him if he kept full control over the nuclear Arsenal during his imprisonment, and for the first time in all our meetings he did not answer my question.

Thus, all this has left my memories about what was happening in America after Vietnam — fallen spirit among the soldiers, drugs, alcohol, and other things of that sort, as well as knowledge about the enormous Arsenal of chemical, biological and nuclear weapons that existed in the Soviet Union and spread among 11 time zones. All this together prompted me to return to Washington, DC from the aircraft to communicate with the subordinates and come up with what later became known as bill Nunn-Lugar.

At first, bill came across the objection that the Soviet Union, Russia is an enemy state; why would we use American taxpayers ‘ money to help the enemy? This question was posed in different ways, but the essence was one. Senator Lugar in a timely manner, though not immediately found a suitable answer — it was about the security of America and the world. It was not a gift of charity — it was a contribution to our own security. And in the end, this argument proved decisive.

— Nunn-Lugar praised as one of the clearest examples of the leadership role of Congress in international and strategic U.S. policy. What are the key factors in both the United States and Russia, has allowed the programme to be adopted and to continue successfully fulfilled for more than two decades?

In the army, and the U.S. Department of defense, as in nuclear laboratories, there were many dedicated people, both military and civilian, whose contribution is difficult to overestimate. This applies to both the US and Russia and other republics, but Russia in particular. Many selfless and Patriotic Russians could have taken these weapons and materials, but preferred to remain faithful to his country and responsibility to the world. Thus, the execution of the program — the merit of many different people.

Although at first the administration of George H. W. Bush did not like our idea, in the end they recognized its importance. But really, the program gained momentum only after the election of bill Clinton, when William Perry (Bill Perry) had shown her such a keen and personal interest in the post of Minister of defense. Of course, Les Espin (Les Aspin) first held this position and played an important role in the adoption of bills so that he, too, was over. All of this evolved over a couple of years. A lot of people worked very hard in Russia and in the United States and in countries such as Kazakhstan, Belarus and Ukraine.

— How do you assess the role of the Nunn-Lugar nuclear disarmament of the former Soviet republics of Belarus, Kazakhstan and Ukraine? Whether the assistance provided a significant motive in the decision made by these republics regarding their nuclear Arsenal?

— It seems to me that the program has played an important role in nuclear disarmament in those countries. At that time they were in a dire economic situation and barely managed to feed their citizens and to ensure their survival. The waste of resources on disarmament and security of the nuclear Arsenal was not for them a priority. The leaders of these countries knew standing before him the danger, and the resources provided by the program was of great value — both psychological and economic.

— After 25 years and given the lapse of time, how would you rate the progress made by the Nunn-Lugar program? Were there missed opportunities? What is learnt from the success of the program, the lesson was the most important for Russian-American relations and the fight against the spread of nuclear weapons?

The main lesson learned from the program was that in the modern world, where the state has lost the monopoly on weapons of mass destruction, we can either cooperate or to survive the catastrophe. And this choice we need to do again and again. This was a key lesson learned by many people — many, but not enough. Now, apparently, we forget this lesson — both in the U.S. and in Russia.

Even when between us there are such significant differences as those that were caused by events in Ukraine and the middle East, and also Russia’s interference in our elections — even though we have a common desire to survive that we must work together. Among the threats we face include the threat of digital — I mean not only the risk for electoral systems, and the possible cracking of early warning systems and launch nuclear missiles that can lead to fatal consequences. Presented program lessons must be learned not only for the sake of our relations with Russia, but also for the further struggle against the proliferation of nuclear weapons. If we are ever to achieve North Korea to abandon nuclear weapons, we will considerably help received during the program experience.

As for missed opportunities — the program of joint threat reduction cost to move to full-fledged mutual cooperation. We have too long followed the model of behavior in which the United States was the main partner. It was a suitable starting point, but over time, Russia became more and more sensitive to their position of the slave, and demanded more “respect”. I think we should have to pay attention to it. However, this program has led to incredible success. We will never know how much we have managed to avoid accidents, but I am sure that a lot.