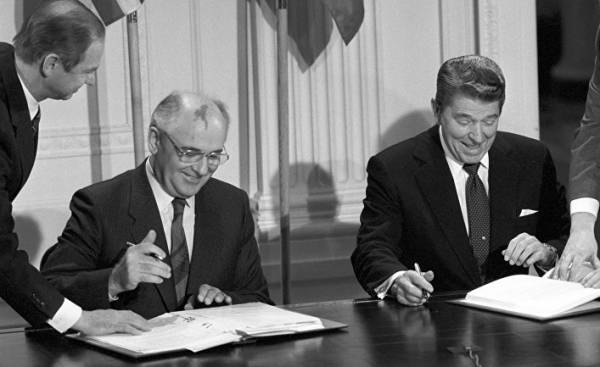 Secretary of state USA Rex Tillerson (Rex Tillerson) said recently: “Relations between the US and Russia has slipped into the gutter, but we want to ensure that they were not in drains”.

It seems to me that the situation was even worse: one should not ignore the escalation of the conflict in Syria, the approach of NATO forces to the Russian borders, often nearly colliding over the Baltic sea and the Black sea, American and Russian aircraft, as well as non-stop anti-Russian hysteria in Congress and in the press.

In such an atmosphere at any time it can be expected that the two powers would enter into direct military confrontation with disastrous results for the world.

However, things could be different. Since the second term of Ronald Reagan and George Bush Sr. as the Russian leaders and the Russian people admired America, considered it a friendly country and was going together with her to build a new bright future.

And Mikhail Gorbachev, and Boris Yeltsin tried to convince Washington that Russia refused an expansionist Communist ideology and are ready to join the “European home”, taking the basic Western values.

I watched this process since October 1988, helping to organise many visits of the American delegations, which included dozens of members of Congress, prominent foreign policy experts, entrepreneurs, University teachers and even the exiles of the Soviet dissidents.

During these visits, we held endless discussions with representatives of the higher echelons of the Russian authorities, with members of Parliament, intellectuals, students and journalists.

Well-known Washington insider Paul Weyrich (Paul Weyrich) — founder of the Heritage Foundation, which had direct access to President Bush the elder was brought to the Oval office, the contents of these conversations. Weirich urged the White house to urgently develop a plan to integrate Russia with the West, a sort of Marshall Plan, which worked so well in Germany and Japan after the Second world war.

It was a unique historical moment when Russia was ready to become a part of the West. It became possible thanks to the hard work of Ronald Reagan and Mikhail Gorbachev. Unfortunately, Mr. Bush did not possess the foresight of Reagan, or could not cope with the “deep state” that believes that Russia is more useful as an enemy than as a friend.

Our proposal was largely ignored. It was limited to empty promises Mr. Bush not to expand NATO to the East, and his proposals to create an arc of safety from Vancouver to Vladivostok.

The team of George Bush Jr., bill Clinton and Barack Obama/Hillary Clinton continued to spoil the case. NATO enlargement, the middle East war, “the Crusades” in the name of democracy promotion, support for the coup in Ukraine, and many other covert and overt action led us to the deplorable state of relations between Russia and the United States, which we see now.

Many expect that Donald trump will be able to reverse this dangerous trend and to repair the damage caused by his predecessors. At least during his election campaign, he promised just that. However, while we see too little encouraging steps in this direction.

Thus, we are faced with the question of what to do. The answer can be found in the recent past. I mean the activities of Reagan, which now respected Americans across political views — even those who did not support him during his presidency.

Fortunately, there are key details of the talks between Reagan and Gorbachev, and in addition between us, there are people from the inner circle of Reagan, with whom you can consult: James Baker (James Baker), bill Bennett (Bill Bennett), Pat Buchanan (Pat Buchanan), Chas Freeman (Chas Freeman), Suzanne Massey (Suzanne Massie), Jack Matlock (Jack Matlock), Edwin Meese (Edwin Meese), Dana Rohrabacher (Dana Rohrabacher), George Schultz (George Shultz), David Stockman (David Stockman). This, of course, only part of these people, and I apologise to those not mentioned here.

In order to resolve the current crisis, we need their advice. We need them as soon as possible.

Mr. trump and Mr. Putin is scheduled to meet on the sidelines of the summit of “Big twenty” in Hamburg (7-8 July 2017), the beginning of which is rapidly approaching. The good news is that both presidents intend to work on the development of us-Russian relations in a mutually beneficial way.

However, it is necessary that the wise men from the environment of Reagan helped to overcome the efforts of those whose goals and objectives have nothing to do with the security of the United States, nor with the survival of mankind.

So Reagan spoke of the opponents of his nuclear deal with Mr. Gorbachev: “Some of those who object the most active… in fact, deep down, already resigned to the inevitability of war — they realize it or not.”

The time for political maneuvering is no longer there. To Mr. Trump it’s time to do what he promised, when he raised during the election campaign banner of Reagan.