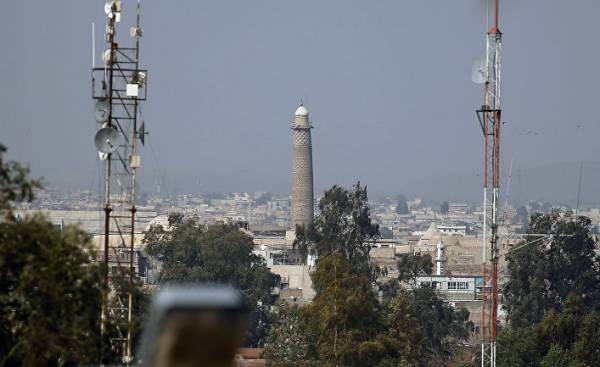 “This is an official admission of defeat by ISIS (a terrorist organization banned in Russia — approx. ed.)”, — said the Prime Minister of Iraq Haidr al-Abadi about the destruction of the historic mosque An-Nuri in Mosul.

But is it really? And why is the mosque so important? Here are five things to know about the explosion of the famous mosque with a rickety minaret.

Why the mosque An-Nuri was so important?

In many ways, the mosque of al-Nouri was a symbol of Mosul before the war. Her more than 800 years, it was built in 1172 and named after Nur ad-DIN Mahmud Zangi, who headed the Jihad against the crusaders. The mosque was known for its crooked minaret that people from the West compared with the “leaning tower” in Pisa.

The mosque was crucial for both sides involved in the war, because in it the leader of ISIS, Abu Bakr al-Baghdadi decided to announce the creation of a so-called Caliphate, in a speech in 2014. It was there that he announced the creation of the so-called Islamic state — so the mosque can be seen as a kind of birthplace of ISIS in its current form.

Baghdadi delivered his speech after ISIS seized in the summer of Mosul, the second largest city of Iraq. This was the first official speech of the leader of ISIS for several years, it also became his last performance. The latest available photos of al-Baghdadi made in the mosque of al-Nouri in 2014. 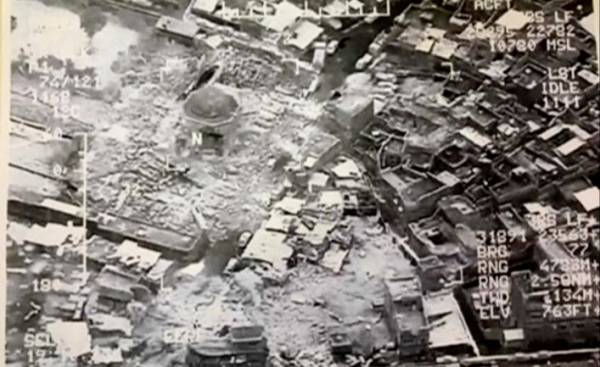 Despite the fact that the Prime Minister of Iraq, ISIL is not usually admits his defeat. Did it this time. They deny that blew up the mosque, and instead dump the blame on the American air attack.

But ISIS previously destroyed or committing acts of sabotage in relation to cultural heritage sites or strategically important places, perhaps most actively when ISIS was pushing Iraqi forces. For example, in the town of Kayar (Qayyara) South of Mosul, ISIS has set fire to an oil field before it was squeezed out of the city last fall. Visibility in the result was much worse, Iraqi forces had to significantly harder.

According to many, Masjid an-Nuri is the main goal in Mosul, not in the strategic but in a symbolic sense because Baghdadi declared the creation of an Islamic state from here. Win it was, therefore, a great victory for the Iraqi forces; allegedly, the Iraqi authorities stated that this is the same thing, and to regain control of the city itself. Similarly, to lose the mosque was a large symbolic defeat for ISIL.

If you believe the Iraqi military, they were 50-100 meters away from the mosque, when that was blown up. This can be interpreted as a message from ISIS: “if we can’t keep control of the mosque, you too will not receive.” Blowing up the mosque, they prevented the emergence of photographs of Iraqi military and politicians made in the mosque, prevented them to declare a big victory that they would have done, having won the mosque, and they escaped a propaganda defeat, which would be the loss of her.

Thus, the bombing of a mosque shows what angle driven LIH. He says that the defeat of ISIS in Mosul is not far off.

Does this mean that the battle for Mosul over?

Not yet, but probably soon.

In the hands of ISIS only a small part of the old city in Western Mosul. On Sunday, Iraqi officers announced the beginning of the “last Chapter” in the attack on the city, Iraqi troops attacked the old town from all sides.

However, to win this part of the city to Iraqi forces will be difficult. Here the densely populated narrow streets, so difficult to attack from the air and use military vehicles, and Iraqi soldiers in some places we have to move on foot. The onset may be bloody and the civilian population. The UN claims that 100 thousand inhabitants kept in the town as human shields.

However, regaining control of the old city, and, therefore, it is necessary to the Mosul question time. Observers believe that after the explosion, the mosque thing could go faster than expected.

Whether ISIS on the verge of defeat in General?

LIH, no doubt, very strongly pressed territorially and in Iraq and in Syria.

While Mosul — the last major city held by ISIS in Iraq and Syria advancing on Raqqa, self-proclaimed capital of ISIS. Report that between us-backed opposition group, the Syrian democratic forces (SDF) has been progressing well.

But some of the territory ISIS still remained, in Iraq and in Syria. Over the years the group has shown great ability to survive, in part — changing the nature. It could happen this time, maybe they will be more to act as a guerrilla group, but the probability is that they will continue to be a source of concern in the middle East. There are trends suggesting that while ISIS is losing territory in the middle East, it will increasingly focus on attacks in the West.

What if the mosque was not bombed ISIS?

The Iraqi military has published photos taken from the air, which suggests that the mosque and the minaret is completely or partially destroyed.

If you believe Iraqi forces, ISIL laid in the mosque with explosives. From the beginning of the offensive on Mosul in the last year, stories circulated that ISIS did this precisely because I didn’t want to see the mosque back into the hands of the Iraqi authorities.

ISIS, however, denies that blew up the mosque. On the website of ISIS Amak (Amaq), argues that the mosque was destroyed in an air RAID of the Americans. But in the video, which allegedly depicted the bombing of a mosque, there is no indication that blowing up a mosque had been dropped from the air. On the contrary: it looks like the explosives were inside.

Americans also deny that the destruction of the mosque was the work of their hands.

“At this time, we did not perform any air operations in the area,” said Ryan Dillon (Ryan Dillon), press Secretary of the anti-ISIS coalition.

When it comes to the war in which the Americans led coalition caused great destruction and took many lives during air attacks, you cannot exclude anything. However, chances are that it’s still ISIS. Exactly ISIS would benefit from the destruction of the mosque. While for Americans and Iraqis to retake the mosque would be a great victory.