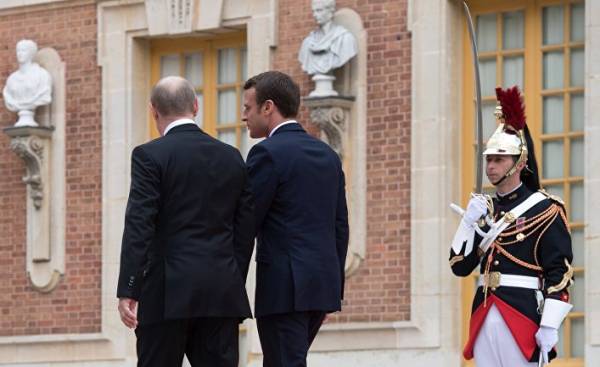 The President of France Emmanuel macron met with Vladimir Putin. His very invitation to Paris is a step of concern which should be condemned in the light of Russia’s Imperial policy.

“You’ll make it in the country, which has become the world one of the examples of the rights and freedoms of the individual. Let me remind you that Putin is on the top of the pyramid authoritarian-repressive kleptocracy of Russia, which creates outrage in the occupied territories of Ukraine and organizes the political persecution of Ukrainian citizens,” wrote the authors of the appeal to the French President, asking him to help the Ukrainians who are illegally detained in Russian prisons. We can assume that the reason for the summit was mutual economic interests, and the statements of Macron on the “a hard line against Ukraine” is the only element of PR.

Today’s Russia is a country with a Soviet Communist mentality without ballast. To replace the totalitarianism of it’s tactical Association of imperialism with elements of the Russian Orthodox faith. Putin always called the collapse of the Soviet Union chief of the Russian failure of the twentieth century. It should be clearly emphasized that the weakness of Germany and France encourages Putin to keep their policy towards neighboring countries. Minsk agreements on Ukraine are only a Fig leaf, and they are no more than the guarantee of the United States, Britain and Russia that gave Ukraine in exchange for joining the program start-1 (the inviolability of borders for the renunciation of nuclear weapons).

Putin will try to mitigate the position of the West, especially on the issue of sanctions. Therefore, before the Polish diplomacy becomes an important task: it needs to form a Grand bloc of Nations in our part of Europe. An important part of this agreement is to create a driving route Via Baltica and railway Rail Baltica corridor. Both of these projects can be used also in transport communication with Ukraine.

In our history there were many common characters, such as General Stanislav Bulak-Balakhovich, who (like him) believed that a counterweight to the Imperial policy of Russia should be cooperation, democratization and right to self-determination. In Poland about General almost forgotten, meanwhile, should remind one thing: “I’m a Democrat, son of the people, Christian-Catholic, my late mother was Polish and her father was a Belarusian. I do not belong to any party. […] In my army were Belarusians, poles from Eastern territories and the Russians who were persecuted for their beliefs Communists and germanophiles. To me always selflessly stretched all anti-Communist forces. […] I strongly believed and continue to believe in God and justice. In 1918, bearing on their banner the image of the cross, opposed to the Soviet star, I entered into an unequal battle for the oppressed peoples. I fought for the freedom of Estonia, the Russian, who wanted to remain a Christian and truly democratic, then Latvia, Poland and Belarus.”

As we can see, 95 years ago, it seemed obvious that the cooperation of the States of our part of Europe — this is the element that can stop the Russian imperialism. Decades of communism, the destruction of the Soviet Union a large part of national elites and post-war propaganda, talk about “liberation from the occupation” turned to social consciousness is extremely negative consequences. To change the ethos of a common multinational state, the First of the Commonwealth, came the idea of “liberation”, which supposedly brought the Red army.

Together we are stronger

We shouldn’t have given Ukraine itself. The poles think it’s obvious that Ukraine is responsible for the genocide, committed by the Ukrainian nationalists from OUN-UPA (banned in Russia organization — approx. ed.), destroying their Polish neighbors in Volyn. Ukraine will have to deal with this, otherwise the theme of the massacre can be used to isolate Kiev. The next country that is expecting a painful collision with the Imperial policies of Putin, will be Belarus. Therefore, we should help the Belarusians to acquire a national identity, which will not be linked to a “liberation” discourse. Figures such as generals Joseph Bulak-Balakhovich and his brother Stanislav, Vaclav Ivanovo, Ivan and Anton Lutskevich, Roman Skirmunt played an important role in the creation of the Belarusian people’s Republic, but now have been forgotten or expunged by the censor. The last of these, Roman Skirmunt, was the first Deputy of the State Duma of Russia, Prime Minister of the BNR, a Senator in the Second Polish Republic and was the cousin of the Polish Minister of foreign Affairs of the Constants Skirata. On 7 October 1939 he was killed by the “liberators from the red army”…

To summarize, we can say that the recipe is simple. Geopolitical Foundation for Polish Eastern policy should be now the First Rzeczpospolita. You need to not only enhance the activity of Belsat TV channel, but to create a channel, addressed to the Russians. Western States will not support the project “Intermarum”, evidence of which are the numerous initiatives that are contrary to our interests as meeting with Putin or the creation of the pipeline “Nord stream”. The priority of the West is a business with Putin’s Russia. We will be able to succeed and to protect themselves from Russian imperialism only if we revive a sense of community between the peoples who created the First Polish-Lithuanian Commonwealth. To do this, we just need appropriate tools.