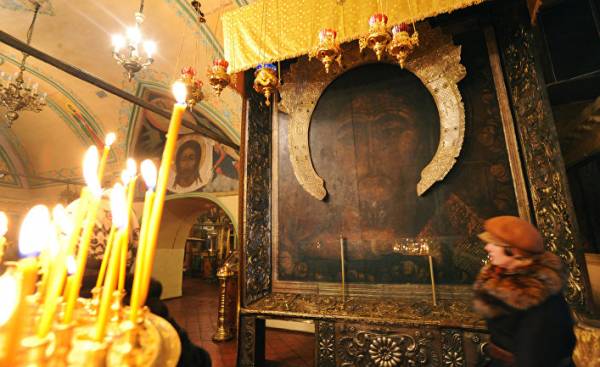 God created man in his image and sacrificed his only son for the salvation of mankind. What if we are not alone in the Universe? Who saved those others? And saved at all? For the Christian doctrine of the discovery of extraterrestrial life would be a serious challenge.

The licentiate of theology Weight Nissinen (Vesa Nissinen) for about ten years working in the University of Helsinki on a dissertation about how extraterrestrial life might affect the picture of the world, describe major world religions, especially Christianity. (Licentiate — a degree in Finland, occupying the position between the master’s and doctoral degree — approx. TRANS.)

Detection alone bacteria on nearby planets, according to Nissinen would produce a real revolution in the world, comparable with the discovery of Copernicus in the sixteenth century. Then the Church had to admit that the Earth is not the center of the universe, and revolves around the Sun, like other planets. Detection of bacteria outside our planet would make the role of the Earth less important.

“The Bible describes how God created life on Earth. Could He then go create life somewhere else?” — offers Nissinen one of the possible interpretations of such a discovery. Another possible interpretation, in which God would return the role of the first cause of the Universe. In this case, the creation of life would likely create suitable life conditions — the point of view of the same kind and partial a recognition of the theory of evolution of the act of Creation.

Research coordinator of the Finnish Centre for the study of the Church Solberg, Jussi (Jussi Sohlberg) does not see in extraterrestrial life no threat to the Evangelical Lutheran doctrine. “This is not an official point of view, but personally I do not see any difficulties for religions that life could be created outside of the Earth.”

More of a challenge would it detect intelligent life. Most likely, we could suspect the existence of extraterrestrial intelligence, fixing some sort of signal or watching a distant object, the origin of which it would be difficult to explain by natural causes.

The reliability of such findings likely would have caused hot disputes in the Church there would be a split soon, however, this discovery probably would have been widely accepted as fact.

In the book of the American Professor David A. Weintraub (David A. Weintraub), which was released in 2013 and touches on the subject, mentioned in the United States conducted a study according to which in the existence of intelligent life beyond Earth believe 32% of Christians. Among atheists and agnostics believe it is 55% and among Muslims — 44%.

However, the hint of the existence of extraterrestrial intelligence would have raised a number of interesting issues. So, we hardly knew anything about the aliens, and communication would be impossible because of the huge cosmic distances. “In this case, the big question would be the appearance of aliens — are the representatives of a distant civilization, like the people in the image and likeness of the Lord,” — said Nissinen.

Especially difficult had with the doctrine of the Salvation of mankind. Would be the Lord’s mercy to the aliens, and if so, how?

“In fact, the starting point here would be two. One approach is to perceive humanity as God’s chosen people, whose goal is to bring the word of God to the rest of intelligent beings,” says Nissinen. Such is the position adopted by the Vatican. The former head of the Vatican Observatory Jose Gabriel Funes (José Gabriel Funes) stated in 2010 that the Resurrection was unique on a cosmic scale event.

Of course, missionary activity taking into account the cosmic distances is very difficult. On the other hand, the doctrine of the Salvation of mankind is not the first time in a difficult situation. And today is a difficult question about people who lived before Jesus, or otherwise never heard — will get a Socrates in heaven?

Besides, it is not entirely clear whether the religions of the world offer Salvation. Thus, during the research cruises were discussed, can be baptized natives or apes. The Vatican here takes a liberal stance. Pope Francis said in 2014 that if a Martian wanted to be baptized, he ought to give the opportunity.

The second approach is to assume that Salvation was granted to every civilization in the Universe separately. Although the theory sounds logical, it leads to a rather strange theological opinions. “The thought of Jesus running from one planet to another, making sacrifices, undermines the Evangelical view about the uniqueness of this event,” explains Nissinen.

The hardest part would if we made the connection or came to Earth by a more advanced civilization. According to Nissinen in respect of such a situation it is difficult to make predictions. “A lot would depend on what the aliens were least outwardly. According to one theory, interstellar travel is able to make only mechanical life forms, so-called machines of von Neumann. And here is the big question, whether such machines are to be saved.”

In addition, the aliens could bring their own beliefs or yourself, to introduce yourself to the people as gods. “There is a view that the appearance of aliens would lead to such large-scale religious crisis, to recover from that Church could not or would disappear entirely, or they were replaced by the new”.

But do not forget that Christianity for centuries has demonstrated the ability to adapt. In his book “the World until yesterday” (The World Until Yesterday) Professor of geography Jared diamond (Jared Diamond) considers the value of religion in society. In his opinion, with the majority of tasks traditionally performed the religious explanation of the Universe, the creation of a moral code, organization of society, justifying the wars of today doing natural science, human rights, law and the state.

Be only spiritual tasks, such as, for example, giving life meaning. After all, the scientific position that life has no meaning, is not for everyone. Another task is through the idea of Salvation or Karma to bring into our lives, where evil doesn’t always get what you deserve, a sense of justice.

According to Nissinen, these topics will remain relevant after the meeting with extraterrestrial civilizations. No matter how highly developed they may be, it is difficult to imagine that they could give satisfactory for all the answer to the question, what is the meaning of life, or to rid the world of injustice.