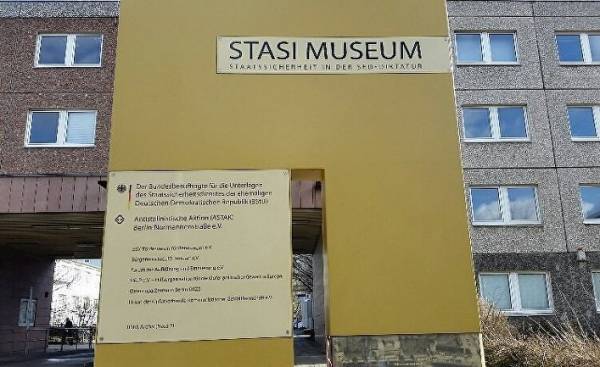 Many, certainly, struck by the perfidy of the East German espionage, which is discussed in the series “Berlin — under the same sky” (“Berlin — under samma himmel”), which ran on SVT. His last part was shown on Tuesday evening.

But the fact that the spies of the Stasi got her through the bed — not the exception, but rather a special kind of activity.

Everything happened with the knowledge of the legendary head of the East German intelligence Markus wolf (Markus Wolf).

He was known as “the Man without a face”, while the Swedish spy hunter Round, Forsberg (Forsberg Tore) finally revealed what he looks like.

Sex is not an unusual ingredient in the world of espionage. The strong affinity led to the downfall of many media.

In a moment of weakness give up easily beautiful, charming or perhaps a sexy geeky female or a male.

Literature about exploration is full of stories, in which women used their sexuality to make the most of the victims secret information.

No spy organization as well did not succeed in this strategy, like the East German security service Stasi.

These intelligence officers of the Communist dictatorship was given a special name: the agents of “Romeo” and “Juliet”.

There are many stories about how men and women who had access to classified information, allowed themselves to be fooled.

Even happened that women from East Germany are married to Swedish men to move to Sweden and from there to share information with East German leaders.

Although it sounds contradictory, the sex was never as hot as during the cold war.

So even if you never visited the idea that the plot of the series “Berlin — under the same sky”, which plays a role, including Swedish Sofia Helin, has nothing to do with reality.

He was the head of intelligence

Markus wolf was born in the South-Western part of Germany. A Jew was his father, but not mother.

In a world reigned troubled times, especially in Germany, which in 1918 lost in the First world war.

Except the disgrace in connection with the defeat, the fate of the country’s burden still imposed on her giant reparations.

Add to this hyperinflation, high unemployment, and a frightening anti-Semitism the national socialist movement, for the development which has created favorable conditions.

When Adolf Hitler took power in the country, the father of Markus left Germany and went to the Soviet Union, taking with him his son.

This is, without doubt, was reasonable.

Shortly after the Nazis came in 1933 to power in Germany, they opened the first concentration camp, Dachau.

The first prisoners were the representatives of the opposition socialists, Communists and trade unionists.

If one of the prisoners was himself a Jew, his situation is not improved.

The informers were everywhere

In the 1930s, the years of communism and world revolution for many was the answer to Nazism and fascism.

With time cleansing and mass murder Joseph Stalin become known to the public.

Many of his fans had lost their faith in a classless society and felt frustrated.

Of course, Markus wolf began his work in the East German intelligence just in that year when the Soviet dictator died, but repression with the death of Stalin did not stop.

Of all Soviet puppet States, the GDR may have been the most loyal. The isolated country has always obediently danced to the tune of Moscow.

To keep the population under strict supervision was a considerable enterprise.

How bad things were, in fact, became known only after the fall of the Wall, when the secret archives were opened to researchers and the public.

Shocked citizens have learned that even members of their own families were informers, and supplied information about their business.

But the question is whether the East German system of espionage under the leadership of Markus wolf actually state pride.

HVA was known far outside the country as perhaps the most effective and terrifying spy organization in the world.

Around the personality of Marcus wolf multiplied very special myths. His brilliant mind and cunning was known among the intelligence officers around the world. General wolf was known as “the Man without a face” because no one knew what he looks like. Being a creature without a face that’s not so bad for the head of intelligence, who wants to act quickly.

Expose looks like the elusive chief of intelligence, was destined Swedish spy hunter.

This magical moment took place in 1978, when Wolff was on a secret unannounced visit to Sweden.

Round, Forsberg was a member of the Swedish security Police, called SÄK, and specialized in counter-espionage. Resources were concentrated on the threat posed by the Soviet Union and its countries-satellites.

In Communist countries, in Sweden there was a lot of intelligence officers under diplomatic cover. Spies of the Stasi was no exception.

Round Forsberg made some changes to the working methods of the security Police during the cold war. Speech began to go about not only to discover and to send secret intelligence agents from the country, now began to more actively attempt to recruit for the role of double agents.

Called the man without a face

Few people knew, looks like Markus wolf. One of those who, however, knew it was the East German spy-defector Werner Stiller (Werner Stiller).

The security police were spending a lot of resources on the listening and surveillance of known intelligence officers.

Once in Stockholm managed to photograph several prominent East Germans with an unknown compatriot.

Who was this strange man with sharp features who was in the frame of one of the records, it was not known then.

Sweden has always led to extensive cooperation with a number of intelligence organizations in other Western countries. Success in the spy world was based on good relations and unquestioned trust in each other.

So there is nothing unusual in the fact that different forces in areas of common interest to share information with each other.

Therefore, we can say that the work of the security Police was an ordinary weekday, when they asked their colleagues from West Germany to look closer at the pictures and say if they know who might be the unknown man on them.

The news produced a bombshell

This question could answer the defector Werner Stiller. He immediately identified the mystery man as the head of the intelligence service Markus wolf.

The news created a bombshell in the intelligence world, and Round the Forsberg managed forever go down in the history books.

The man without a face suddenly had a face. It was as if the West has finally managed to tear the hateful veil with a well-hidden faces of the wolf and the Stasi just.

It was the exposure with the priceless symbolic value. The photo was published in many Newspapers and magazines around the world.

After all, Markus wolf was not just anyone. Many believed that the wolf became the prototype of the character “Carla” in the spy novels of John Le carré (John le Carrés) that the master of the Thriller, however, strongly denies.

John Le Carre has said several times, he feels only contempt for Markus wolf and the regime to which the right has worked for several decades.

It can be assumed that feelings of Marcus wolf to Round to Forsberg, who exposed his person, was supposed to be as cold.

But on the contrary. And wolf, and Forsberg as professionals assured each other of mutual respect. They had the opportunity to meet in Stockholm and to talk about the cold war and the mysteries of the profession.

There is a classical and perhaps a little unexpected photo 2002, where ancient enemies sit at the same table at the Stockholm Hilton hotel at Slussen.

Sociable Round, Forsberg was ready to talk with former spies from the other side of the iron curtain.

Due to the fact that the Berlin wall fell and East and West Germany were preparing for the reunion, Markus wolf, in 1990, fled to Moscow.

We can say that Markus wolf gave up. In any case, he returned to his old Fatherland, where he was born. Wolf was sentenced to six years in prison on charges of treason, but the sentence was subsequently cancelled, as the crimes of which he was guilty were not punished in East Germany.

Markus wolf had never apologized for a time when he fulfilled the role of head of intelligence, the East German dictatorship. He was justified by the fact that he was no worse than their colleagues in the West. Wolf believed that history is written by the winners. But he never relied on the version of the winners.

Almost two years later, in August of 2008, at the age of 75 years died a Round of Forsberg.

Both managed to get rid of any illusions. Time surpassed the old chiefs of intelligence. The world was dominated by new ideals, the ideology has changed, and the security Police was not the same.