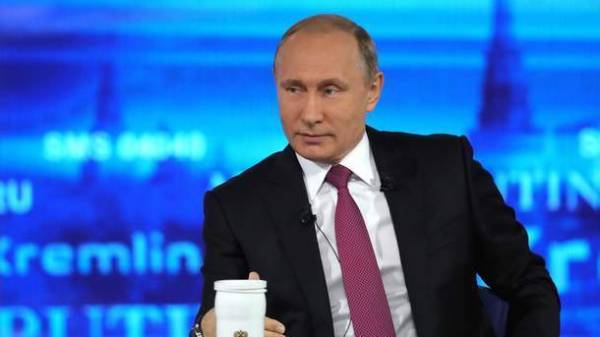 The Russian oppositional politician Konstantin Borovoy considers that the main problem of Russian President Vladimir Putin at the moment is isolation from the Western countries and the lack of contacts with world leaders.

About this Borovoy wrote in an article for “Apostrophe”.

“Putin’s main problem now is contacts. It is obvious that he is in deep isolation, and for any politician, even the most simple contacts with Putin is a lot of unnecessary questions from journalists and citizens. As for Putin, partial relief of this exclusion,” he said.

“The main thing that haunts Putin – the possibility of starting at least simulate the talks with the Americans. The situation is very dangerous for Putin and Russia, because the deterioration of the economic and political condition of the country is very evenly and constantly,” – said the oppositionist.

“The latest statement of the Russian defense Ministry that they will destroy any flying objects in Syria, could be the reason for trump to withdraw from the meeting with Putin. But I think that meeting will be. Short. That is Putin’s dream about a large-scale meeting, which will discuss Syria and Ukraine, and non-entry of Ukraine into NATO, and the Crimea, will not come true. Negotiations in the full sense of the word, and meetings with a pre-formed agenda, and some agreements, will not. But the meeting, which may be a hint of preparation for the negotiations may occur. Even assuming that the kind Donald trump can say kind words about the possibility of negotiations. However, to make a breakthrough action, as hope in the Kremlin, it is impossible”, – says Borovoy.

In his opinion, the negotiations, the US and Russia involve mutual concessions, but the Kremlin did nothing.

“It’s clear why the Kremlin is instead to solve problems through provocations leads to negotiations. And when they can’t lead to the result, the negotiations become meaningless. Except the Donbas and the Crimea, European politicians have a lot of problems: the unity of the European Union and the situation in Syria, generally in the middle East, and many others. Of course, the problem of Ukraine is not the main summit. Unfortunately. I think for Europeans the main thing now is what urges Donald trump to take on more responsibility for their own decisions and actions,” – said Borovoy.

“The Ukrainian crisis is also a result of the inaction of the Europeans. If in 2008, during the beginning of the war in Georgia, the response was adequate, if the Americans had not really intervene to stop the conflict, and this would deal with the Europeans, and not at the level completely empty Medvedev-Sarkozy agreement, it may be, today’s problems in Ukraine would be a completely different scale, the European problems with the unity would have looked different. So what to discuss at the summit is that, very much”, – summed up the oppositioner.