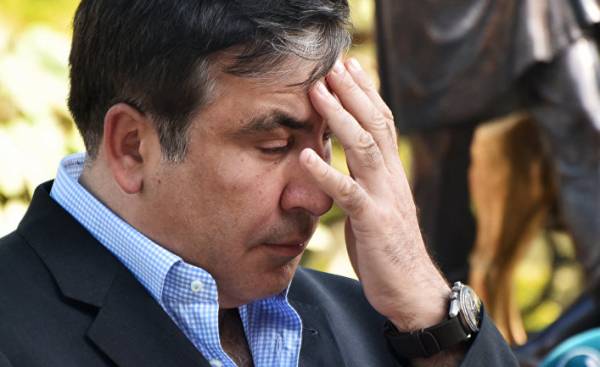 Saakashvili, the former President of Georgia resigned from the post of Governor of Odessa in Ukraine in protest against what he considers large-scale corruption.

Last year he criticized the President of Ukraine because he does nothing to end corruption in the country.

Mikhail Saakashvili became known worldwide when, in 2003, led a revolt in the homeland, in Georgia, and later was elected President of the country.

Saakashvili belongs most of the credit for the successful fight against corruption at home, and that Georgia in the last ten years is experiencing significant economic growth.

But Frank and often impulsive Saakashvili made himself a lot of enemies.

When presidential term in 2013 came to an end, he quickly started several investigations. This led to the fact that he chose to leave the country.

From Georgia to Ukraine

To Ukraine Mikhail Saakashvili studied and passed military service, he actively supported the uprising on the Maidan, which overthrew Pro-Russian President Viktor Yanukovych in 2014.

However, when the new Ukrainian President Petro Poroshenko in 2015, Saakashvili appointed Governor of Odessa, trying to strengthen the reform process and the fight against corruption, it has attracted worldwide attention.

But Saakashvili quickly encountered the massive resistance of influential businessmen and bureaucrats, who felt a threat to their position.

In the end he chose to resign, while simultaneously exposing the harsh criticism of his former friend and ally of Poroshenko.

“In fact, in this country there is no political leadership,” — Saakashvili said in an interview with NRK in January 2016.

“The movement of new forces” should fight against a political system that, in his opinion, is not able to provide what is the official goal of Ukraine: the democratic establishment based on liberal market economies of the European society.

But now the party, apparently, will have to do without their leader. To lead the party or to nominate a candidate for election to Parliament can only citizens of Ukraine.

Ukrainian migration authorities were given to understand only that Saakashvili allegedly pointed the wrong data, or the fact that he is a citizen of another country, and that a final decision on the deprivation of citizenship was made by Petro Poroshenko.

Ukrainian journalist and MP, Mustafa Nayem (Mustafa Nayyem) wrote in Facebook that the decision is the most stupid thing that could make the government, and that this is a sign of weakness that he still haunt.

Nye — a member of the “Movement of new forces.” He compares the current case with the imprisonment of former Prime Minister Yulia Tymoshenko, with Yanukovych regime.

Another well-known journalist and the Deputy of Parliament Sergey Leshchenko wrote on his page in Facebook that if the former Ukrainian President threw his political opponents in prison, Poroshenko sends them into exile.

At the same time adviser to the Ministry of internal Affairs of Ukraine Anton Gerashchenko on his page in Facebook defends the decision and says that Saakashvili, when asked to grant him citizenship, withheld information about the fact that their homeland was under investigation. Gerashchenko also writes that many expect that Saakashvili will help Ukraine in the reform process, but that he instead spent too much time on satisfying his own political ambitions.

Mikheil Saakashvili is now in the US and has not yet commented on the incident.

The facts about the conflict in the East of Ukraine

* The armed conflict began in mid-April 2014, when Pro-Russian separatists raised the rebellion in the East of the country.

* At the time Russia in March annexed the Crimean Peninsula.

* Have since been killed, almost 10 thousand people, about 1 million became refugees.

* In September 2014 by the government of Kiev and Pro-Russian separatists in the East signed the agreement, which was to put an end to the conflict. The agreement was not fulfilled.

* February 12, 2015 the parties in the Belarus capital Minsk concluded a new ceasefire agreement. The agreement also contained a plan for the future to ensure lasting peace in the region of Donbass. Most of the territory of the region is now controlled by Pro-Russian separatists.

* The truce came into force on 15 February 2015, but violated almost daily.

* Minsk agreement provide for the granting of autonomy to Eastern Ukraine. The decision was taken by the Ukrainian Parliament, but it will only enter into force after local elections will be held and will come into force a new Constitution. It had to happen before the end of 2015, but has not happened yet.

* The leaders of Russia, Ukraine, France and Germany have repeatedly tried to start peace negotiations, but military action continued.