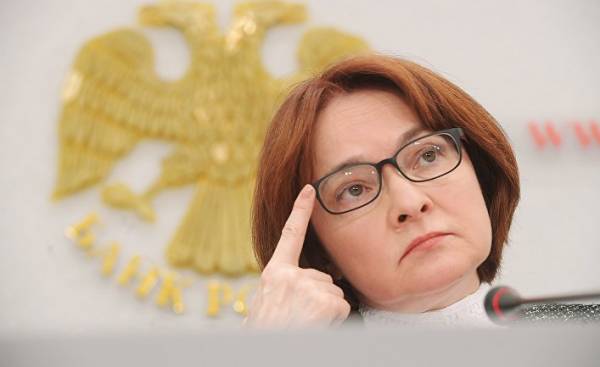 They only discuss. Perhaps they even will not enter. But the new sanctions that are under consideration by the U.S. Congress, have become a factor that the Bank of Russia can not ignore.

Although the head of the Central Bank Elvira Nabiullina said that the sanctions will have no impact on Russia, the threat of broader measures was probably one of the reasons why politicians chose to cut interest rates last week, according to Morgan Stanley and Raiffeisenbank. On Tuesday, the Treasury Department expanded the list of individuals and companies fined for the annexation of the Crimea Peninsula in March 2014.

Cooling in the geopolitical relations exacerbates an already difficult situation for politicians. There is a risk of capital outflows, this week, oil prices fell for the falling market and the ruble in June appeared to be in second place in the world on the worst-case ratio with the dollar. Last Friday, the Central Bank decided on easing monetary stimulus by a quarter percentage point after a more significant decline in April.

“One of the reasons why they chose only 25 basis points was the uncertainty regarding geopolitical conditions, said Timothy ash, senior strategist for emerging markets at Bluebay Asset Management in London. — In fact, Russian policy is “a war economy” when rising prices for durable goods, long-term and costly battle with the West.”

The US Senate bill proposed to add restrictions on banks and energy companies to raise capital, and to prevent new sanctions against state enterprises in railway, shipping, steel and mining industries, as well as in the field of energy pipelines. The project does not include limits on public debt or derivatives, but provides for a study of the possible impact of such restrictions.

The law stalled in the House this week because of a procedural dispute after receiving overwhelming support in the Senate on the background investigation of the Kremlin’s interference in last year’s presidential election.

These events “have played a role in the decision of the Russian Central Bank, changed his opinion in respect of reduction at the initial stage, but not in respect of the planned weakening,” wrote in its report, Morgan Stanley economist Alina Slyusarchuk.

According to Nabiullina, after three straight cuts in the discount rate, the Bank of Russia can suspend the process, depending on the risks. Even if sanctions are aimed at Russian market of bonds, the debt will remain attractive, she says. According to her, a possible ban on the possession of Federal loan bonds (OFZ) carries the risk of losses for foreign holders, and creates a buying opportunity for local investors.

“Rate cuts may slow down due to any external risks caused by the sanctions if they affect inflation and financial stability are priorities for the Bank of Russia,” said Dmitry Polevoy, chief economist for Russia at ING Groep NV (Moscow).

So far Russia has managed to circumvent the tension, and terminate on Tuesday a deal on foreign debt in the amount of $ 3 billion, with the bulk of foreign filings came from U.S. investors. However, some European investors are unable to participate in the sale of Eurobonds, as the state Bank, which organized the deal, is the subject of sanctions.

According to the Central Bank, non-residents own 1,83 trillion. (30.6 billion US dollars) sovereign ruble bonds on may 1, which is almost a third of the OFZ market. Russian bonds issued in local currency returned to the level of 8.25% this year in dollar terms.

The probability that the US will impose sanctions against public debt, “quite low,” says Polevoy from ING, he expects greater certainty, after the Russian leader Vladimir Putin and U.S. President Donald trump will meet at the G20 summit in Germany in early July.

“Discussion of more severe sanctions is only one of the factors that takes into account the Bank of Russia, — said economist at Raiffeisenbank in Moscow Stanislav Murashov. — However, the Bank of Russia will continue easing monetary policy. The question is, at what rate”.